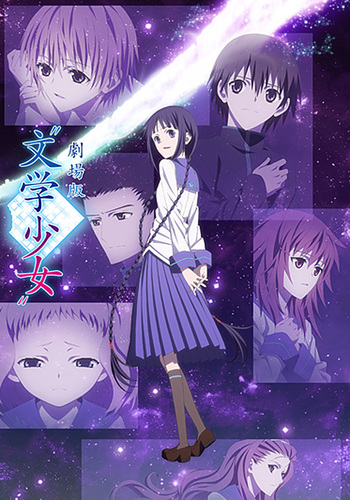 Here ye! Here ye! You good sir and you madam! I do proclaim I have witnessed a tale of drama and tragedy! Comedy and romance! It has it all and will leave you wanting for nothing!! Behold the psychotic yandere childhood friend of emotionally retarded, socially inept generic protagonist! As the first member of his harem, she claims ownership of the protagonist she calls her dog, she projects her hatred of herself onto the protagonist whenever he is around, harassing his friends and threatening to kill herself every twenty minutes adding to the drama that will shock and horror you! However fear not as this villain is rivalled by harem member number two, she fell in love with the protagonist as she admired him from afar and began meddling with his business utilizing her concidence techiqueo! The protagonist who unfairly teaches children that all you need to do is be kind to others and you will have a harem of obsessive girls struggles to make everyone happy with the only virtue he has: being unrealistically kind and forgiving!!

This group of wayward children require a guide and only the bungaku shoujo, the third and final member of the harem can fulfil this role! She sustains herself through paper and I thought she was so odd that the plot twist would be that she wasn't real or some fight club shit but I was wrong and she is actually a real person!! Who lives on eating paper!! Hence the name!!!

The bungaku shoujo doesn't have much time to aid the protagonist as the majority of scenes are taken up by the psychotic yandere but luckily some nameless characters who were clearly fleshed out in the book but neglected in the movie are ready to support her. Will this be enough to find a way to placate psychotic yandere girl? What will happen to side character 2nd harem girl? And what about the protagonist's mysterious archer friend? Find all of this out and more by wasting an hour and a half of your life on this melodramatic garbage!!

The eyes on the face were too big and hence there was no real space for a nose or a mouth but so long as you are okay with watching some real life otherkin owls, there is no problem. Whenever you feel like pitying a character make sure to close your eyes, otherwise you might notice that they are portrayed as super kawaii and stylish characters that undermine their storyline and problems!! The scenery was okay but there wasn't much scenery as the entire anime is indoors anyway and magical light shows occur so dreams can come true, pretty lights substitute plot but it's all ruined by the flat chested characters!! What's the point of a melodramatic without bewbs you hopeless director!!

Sound is faster than light in Bungaku Shoujo as the OST tells the viewer what is going on before you see it happen by playing some pretentious sad music or some pretentious inspirational music, presumably as a courtesy for the rational man who is rightfully confused by what he is seeing in the movie. The OST gives the viewer the happy alternative of simply listening to what kind of melodramatic piece is being played rather than having to read the subtitles and you shall know whether a character is trying to commit suicide, dump somebody, say something inspirational or if someone is having a mental break down. The sound tells its own story, as if to say "who the fk needs this awful animation and script? Just listen to me and I shall guide you!" A lovely sentiment that redeems the anime by an entire 1 point in my overall.

The seiyuu cannot be blamed, I pity them but they tried their best. Better luck in future ventures my friends!

Within the framework of the fake plot, these characters seem trivial, melodramatic and unapproachable, their lives strung together by coincidences. Ultimately as the author and director have admitted on a joint interview performed by ANIMEJAPAN, the story of this anime originated from a dream the author had in his past life as a goldfish. The coincidences within the fake plot may seem lazy but within the home of a goldfish it is common for all of the owner's fish to swim past each other multiple times per day thus explaining the "small world" coincidences. This goldfish theory may also explain the odd appearances of the characters and why they are always screaming, eating weird food and trying to commit suicide all the time. If I were a goldfish, I can only imagine that I would have the same outlook on life and whenever I see a goldfish, they do appear to be screaming and I wouldn't be surprised if they ate paper.

It is up to the viewer whether to follow the more implausible and absurd fake story or the goldfish theory but this mystery only adds to the experience as the viewer can take a break from asking existential questions induced by the quality of the movie and take a moment to ponder whether our lives are also just the dreams of a goldfish.

While this anime would have been infinitely more enjoyable if all the characters were fish in a fish tank and more plausible too, I cannot give out ratings on what could have been. While we may lament this lost opportunity, we should be thankful for what we have and appreciate all of it. The coincidences that imitate a conspiracy, the comedic relief of a girl who eats paper (funny AND cute), the pretentious life lessons and profound speeches that leave us wondering: what the fuck are they talking about?

This may not satisfy all viewers but as the chaos from warhammer would say "sanity is for the weak!"

I really liked this movie. When I finished it, I was smiling and I had that warm, fuzzy feeling you sometimes get when a story manages to emotionally involve you.

If you analyse each part separately, I admit that it's an average anime. But everything seems to somehow blend together vey well and fall into the right place so that it manages to become a nice, heartwarming watch.

The story isn't very original, but it's narrated well and with the right pacing. The characters aren't spectacular yet they are built and developed well - at least the three main ones. I really can't say more about the plot and the characters without spoiling it. So I guess I'll write my shortest review ever and stop here.

In this review I want to use Bungaku Shōjo’s style of associating stories with various tastes. I don’t know about the rest of the world, but in my country there are vitamin C pills sold at the chemist’s. Those pills consist of sweet coat to prepare you for bad thing, bitter middle layer, where the actual medicine is located, and honeyed core to wash away the after-taste. Bungaku Shōjo has that kind of a story.

The first OVA has Japanese girl talking about some story written by the Russian classic author. I was impressed, not by the story, but by the whole concept. That cute and unusual scenario was standing out against a background of the latest anime shows, so I enthusiastically waited for the film. And here it came.

The plot revolves around Inoue Konoha, a high school student who once wrote a best-selling novel but doesn’t want to continue author career. He has a bookworm friend, Amano Tōko. She is a literature girl whose food is books, literally. Since I like books myself, I usually go berserk every time I see somebody ripping a page or something, but okay. Amano is very sympathetic character, so I easily forgave her.

The film begins like aforementioned coat of a pill: sweetly and light-heartedly like your typical romantic story. But then it throws the viewer into whirlpool of despair and psychological problems. It wasn’t the stuff I expected after watching that OVA, but I have to admit that Bungaku Shōjo works perfectly as drama. The plot is a bit rushed in the beginning and has some sharp angles but it is good at one certain thing: transmitting necessary feelings to the viewer. Bungaku Shōjo is a very atmospheric creation, and the music really helps here. Those piano-centred arrangements are definitely a good choice for a film of such kind.

Two major themes of Bungaku Shōjo are romance (of course) and books. Yeah, the books help us to express ourselves; thanks to them we can share our experience, dreams and emotions. I am somewhat an amateur writer myself and I enjoy writing short stories, so I appreciate Bungaku Shōjo for exploring the role of literature in our life.

However, there are some minor minuses in this film, like the fact that Amano is a book-eater has no real significance for the plot development. Looks like she is given that trait just to become more… mysterious and strange, I think. And I have already mentioned that the story of the film has some difficulties in it. Another thing is the art which is certainly not a masterpiece: trains look damn plastic, for example.

So, was Bungaku Shōjo good or not? In the beginning of my review I compared it with a vitamin C pill, and vitamins are nice for health, right? In fact, Bungaku Shōjo is the best romantic drama I’ve seen recently, and that is equal to 9 points in my eyes.

P.S. Night on the Galactic Railroad, a book by Miyazawa Kenji-shi, has a prominent role in the story of the film. I don’t know whether that intentional or not, but I like how Inoue Konoha, the protagonist, shares the same family name with Inoue Masaru-shi, a man known as “the father of Japanese railways”.

P.P.S. I really want Amano to try out my quantum mechanics textbook. Wonder what taste does that hell of a book have.

Bungaku Shoujo such a lovely little movie that is over before you really want it to be.  Or at least that was what I thought when I finished the movie.  Though as for the reason for having those thoughts well they become pretty obvious within the first 30 minutes of the movie. The main plot revolves around Konoha Inoue as well as his fellow student and literature club member Touko Amano who just happens to be a yokai who eats stories as a form of food.  Which is why she forces Konoha into the club so that he can write short stories for her as an after school snack.  Things begin to take a strange turn when one day a strange note with only the image of a strange beast appears in the club's love help box.  From there Konoha is forced to confront his past as well as one certain individual who plays a large part in it.  It becomes a story of love and the things we do so that we don't end up alone in life.  Something that I'm sure anyone can relate to in some manner or another.  As for things like the animation and sound well it's as good as you would expect and I don't mean that in the bad way.  As for the characters well to go into to much detail would end up spoiling the movie so all I will say is that it was quite easy to relate to them and by the end I didn't come out hating or disliking any of them.  Overall if your in the mood for a good romance drama then I'm sure Bungaku Shoujo can easily satisfy that craving.

Kind of story which break me into milion pieces to fix me like Kintsugi at the end...

Hate it? Love it? Both strugling in me at the same time.