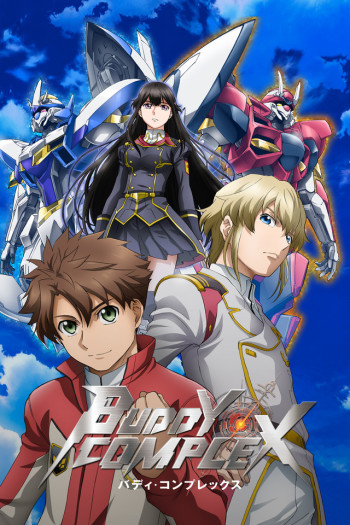 I just enjoyed the mecha/action/comedy. As being a fujoshi, I hated Aoba x Hina. tsk tsk tsk that girl, I wanted to get rid of her.

Coupling... something what fujoshi claim, shipping. But here, it was absolutely different. If people like me came here to watch just because of that coupling means shipping, then it's wrong. It is sad to say no BL, but you can say that it can be one-sided friendly love. Like the last episode (actually specials) Dio cried because of that (idiot) Aoba was leaving. and the last, last... where aoba x hina.. blah blah... >:P I hated the romance.

For all the fujoshi, this anime IS not BL, neither hinted as. I WAS basically tricked, I guess... now I'm crying and regretting...

I wasn't hopping to give a 6/10 but I guess it's fine, I really liked the mecha and all action.

ART: One of the better looking anime I've seen in a while. Although the action is very fast at times it is still easy to follow and characters are very identifiable.

SOUND: Although I just finished watching it I'm already struggling to remember any music from the series. In my case this is not a bad thing though as I rarely pay any attention to the music. Music should be there to enhance the viewing and not take it over. With this I got no complaints.

CHARACTERS: Main character is Aoba. A normal highschool boy who gets caught up in some time travel and a massive war.

Hina starts out as Aoba's classmate but she is much more. She saves him when the school comes under attack and is the one who send him into the future to Dio.

Dio is an ace mecha pilot and part of the Buddy project. Although not happy with Aoba he is stuck with him as they are perfect buddies. Together they may be what the Alliance needs to win the war.

STORY: Aoba doesn't have a care in the world. His grades are good and he is a star athlete. Things change drastically when an unknown mecha suddenly appears at school and starts shooting up the place. It quicly becomes clear that he is the target of the mecha and this is when a second mecha appears. This one piloted by his classmate Hina and she's out to save him. She does a bit more though and actually manages to send him into the future. There he finds himself alone in a macha while a battle is going on outside. He makes the choice to fight and actually manages to buddy up with Dio and his mecha making them an unbeatable force that saves the day. While this is good the problem is that he is now stuck in the future with no way to return home. The only one who may know that is is Hina but she is missing. Or so he believes. He is amazed when he discovers Hina there in the future with him but there is a slight problem. She no longer remembers him and she is fighting for the enemy.

RANT: I rather liked this anime. Sure it has its problems but I'm willing to overlook them for the most part.

Time travel is a very hard subject to do because the threat of a paradox lures around every corner. This anime is no different in this regard. There are so many possible paradoxes that keeping track of them all became impossible. I essentially just gave up, threw hy hands in the air and said: "Fuck it!"

If you are unable to do this then stop now because nothing I will say will change your mind and this anime will only piss you off. Unless you are a masochist and like to keep track of all the paradoxes. In that case I will salute you because you are a better person than I am.

As mentioned this anime relies heavily on the time travel element and the fact that the viewer is more or less braindead in regards to the paradoxes. One I couldn't let go was the Hina effect. In the final episode you finally learn about her past and what she really means to Aoba.

Anyway, after she saves Aoba by throwing him into the time portal she vanishes from the mecha for....reasons. She actually goes back 10 years before the current time that Aoba now finds himself in.

There she is found by enemy forces and their commander who takes her in. So far so good but for one small detail. Not only is she dropped 10 years into the 'past' but she also suddenly loses a decade in age. This is not how the usual time travel gimmick works. You travel as you are to a time and go on from there. I'm currently 42 years old and if I build a time machine in my basement and go back 20 years I will still me 42 years old. I won't step of the machine and suddenly find myself to be 22 again.

I know they did it to keep the main characters at the same age but it is beyond stupid. Time travel is hard enough to take without throwing this stupidity into it.

I also found how they reacted to Aoba very amusing. After going into the future Aoba finds himself in the mecha and from there joins the fight. Eventually.

After the fight people ask some serious questions about how he got there and who he is. He answers with the truth and is not believed. Not that surprising really unless you start to think about it.

The base that is under attack is very secret and out of the way. Security is very tight and extremely hard to get through. The base is currently under heavy enemy attack, the actual pilot is dead and the hatch of the mecha is buried under a few tons of rubble. Yet here is suddenly one Aoba sitting in said, burried mecha wondering what the fuck is going on.

It becomes even more laughable when you learn that in order to have both pilots working in sync there must be no lag between the 2 machines. They solve this by.... TIME TRAVEL! Yes, indeed. The signal between the mechs is actually transmitted a few nanoseconds into the future to counter the effects of lag.

I wonder how long until they can install this hardware on my ps4 as I get myself shot due to lag on a regular basis.

Anyway, back to topic. The army dudes belief nothing about his story of time travel dispite all the evidence stating otherwise. This was, for me, unintentionally hilarious.

The thing is that the opposing forces have been fighting for close to 70 years with neither side getting a decisive victory. My problem is that for most of the runtime of the anime the Allied side that has Aoba gets their asses handed to them in every encounter. I mean total annihilation. They don't get beaten, they get destroyed and every time only Aoba and crew manage to get away to safety.

Every time this happened I kept wondering how this war was still going on. The Allied were beyond inept and were more there as mobile targets for the enemy. I'm not asking for much here but throw the allied forces a bone!

Let them have a victory, even if it is off screen. Have the enemy forces kick ass and show a news cast telling how shit got real but how a victory was scored somewhere else.

If you like some good mecha action and if you can ignore the time paradox crap than this may be something for you.