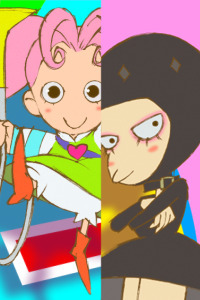 A girl comes there to become a dentist of dragon. She is with other new freshman applicants, but there is no announcement from a senior as a guidance. They are confused and taken along with the senior. The only way is just to walk through freshman's path, which is dark and strange. They do not know where they are. Not knowing what to do, she is approaching to the secret of dragon, but she does not realize yet. The adventure has already begun.

"Every single day as always. The way to home as always... The thing waiting ahead is..??"

This episode is a making film of #12 "evangelion: Another Impact (Confidential)"

MOBILE SUIT GUNDAM series are still favored by various generations [and] passed its 35th anniversary. The animators who played the core roles in the memorable first series MOBILE SUIT GUNDAM are Yoshikazu Yasuhiko [and] Ichiro Itano. We would like to leave the key animations [of] the film production to posterity to praise their achievements, which influenced not only the audience but also the current anime industry.