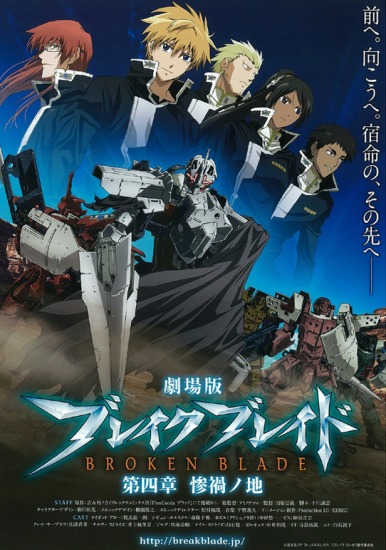 Break Blade Movie 4: Sanka no Chi finally makes the shounen roots known. It was obvious this moment would come, but here we finally get slapped with it. The careful pacing of the first three episodes is changed in favor of a more combat oriented show. While it was kind of obvious that this was going to happen at a certain point, it is no less of a letdown. Still, it is shounen/mecha first and inevitably this was going to happen.

Whereas the writing was restrained and with a measured pace in the first three movies, here Break Blade is finally pushed into the combat oriented territory. The character development suffers from this, as now we get short snippets that are supposed to explain a lot rather than the leisurely pace afforded by the earlier films. The story is somewhat sidelined in favor of introducing a batch of potential boss fights we know are going to happen at some point... and we already get ready for the "loser edit" of certain characters.

"Loser edit" is a term that was popularized in reality TV. Once a character has been decided to be removed, people go over all the footage and look at the reasons for their eventual downfall, in order to present a narrative for the viewers to enjoy. We do this with history ("the writing was on the wall" is a phrase that terms the way we do this in hindsight), and with a load of other things... but never is it more obvious than when it is a way to set up characters to die in shounen manga/anime. And here, plenty of characters come with the "loser edit" built in to their narrative from their introduction.

Anyways, the animation here is a solid showing. Yes, I find the combat animation of mecha battles clunky and an excuse for lower budgets, and this is obviously such a case. Still, within the restraints of the genre, the animation is pretty well done, though lacking a wow factor. The audio section remains unchanged, though the use of surround sound is rather enjoyable (but not groundbreaking).

This is where the series went downhill for me. Break Blade Movie 4: Sanka no Chi forced the pace to be faster and lost a lot of what made the first movies different from your run of the mill TV shows. Still, it isn't bad. Just rather obvious.