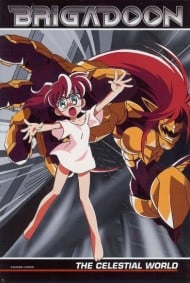 The year is 1969, and strange things are happening on Earth: a strange formation known as Brigadoon has appeared in the sky, and mysterious alien machines have begun to attack a seemingly ordinary orphan girl named Marin! Luckily for her, Marin finds an artifact which summons the alien Melan Blue to protect her – but there is more going on between Earth and Brigadoon than meets the eye. However there is more going on behind the scenes between Earth and Brigadoon. Along with a cast of quirky characters, Marin must get to the bottom of what’s going on, lest both Earth AND Brigadoon be destroyed forever!

StoryGrowing up, I was lucky enough to have epic sci-fi tales told at night by the wordsmith Arthur C Clarke, and out-of-this-world lullabies crooned by eccentric Ziggy Stardust. This gave me a taste, which rapidly developed into love, for the fantastical that still hasn’t left me as I rapidly approach thirty. Whilst browsing Anime-Planet for another rendezvous with the weird, a lone recommendation between Narutaru and the obscure Brigadoon Marin to Melan caught my eye. Going into the show blind with no reviews to read and no friends to comment on this older title, I took a step into the unknown only to discover the inexplicably underrated. Starting out with an overtly childish and juvenile tone, the story initially spends time introducing the title worthy, Marin. The young girl is given a heartbreaking family history and taken out of her comfort zone, only to be plunged into a science fiction nightmare. Keeping the viewer guessing what will happen next, the writers maintain a constant barrage of deeply depressing twists throughout. Each time you think life can’t get much worse for poor Marin, her life is flipped on its head and cruelly beaten into submission. The thirteen-year-old girl has not only blossoming maturity to deal with, but also social issues and philosophical concerns. Brigadoon’s diversity is its strength, and this quickly becomes apparent as this child-like character undergoes some jaw-dropping experiences. Jumping between Earth and Brigadoon, the plot successfully weaves an intriguing back-story for Marin and explains why both Melan Blue and the rest of the alien world would want this ordinary young girl. Playfully keeping the viewer on their toes, the cute cat-looking side characters remain a mystery throughout much of the show and frustratingly imply they know the whole story. In the meantime, the show quickly shifts into monster-of-the-week mode, as the heroic pair confronts new adversaries to fight off. With never a dull moment, Marin continues to evolve as she is thrust into more unfortunate situations and her life goes from bad to worse. Littered with scenes of graphic violence, certain portions may not be suitable for all viewers. Attempting to redress this balance and appeal to a wider audience, there are certain moments where brutal savagery is bizarrely replaced with slapstick and a cream pie battle ensues. However, young teens will certainly find appeal in the alien warrior, Melan. His flashy fighting style is reminiscent of a shounen anime series and this frequently punctuates the dark and psychological undertones of Brigadoon. Dabbling in both this, and other genres such as political war and comedy, the constantly changing face of the show is well suited to an episodic approach. Each twist and nuance, no matter how small, becomes a plot-device that blends together into a fearless climax that shows a total disregard for traditional happy endings.AnimationFalling into the tricky transitional period of the millenium, Brigadoon shuns any garish CG effects and instead sticks to simplistic drawings. With an initial off-putting feeling, Marin’s saucer-eyed charm missed the mark with me and I disliked the cartoonish feel of the show. However, perseverance definitely paid off and a dull palette of greys and browns reflecting an insipid life of 1960’s Japan are soon complimented by gleaming gold’s and blazing blue’s of planet Brigadoon’s scenery. Even though the visuals are nothing special, there is a surprising agility to the characters during the fight scenes that flow easily and are a pleasure to watch.SoundReminiscent of both Fantastic Children and the Hack series, Brigadoon successfully uses a simple vocal harmony to highlight the other-worldly feel of the show as the alien planet interferes with ours. The soundtrack, although unmemorable, defintiely adds to the diverse and ever-changing genres throughout and blends well with the story's circumstances. Dragging down the overall score of this section, the English voice acting was atrocious. With the cartoonish voices echoing the childish animation style, I cannot recommend the original (and excellent) Japanese seiyuu’s performance highly enough.CharactersOf Brigadoon’s gripping storyline, one of the most outstanding features is the complexity of a developing relationship between Melan and Marin. Potential romance between a thirteen-year-old girl and a twenty-something humanoid is wrong on many levels, but their feelings go well beyond this. Starting as best friends, they move through a father-daughter bond, but their eventual reliance on each other is designed to tug on the viewers' heartstrings, and it does it with an unmistakable temerity. There is a constant reminder of Melan's instinct to protect Marin and the effect this has on the young girl, as she starts to question her true feelings for the alien warrior. Causing a great emotional response in viewers, the supporting cast give more reasons to like and cheer on the unfortunate heroine. Minor psychological bullying from classroom adversaries evolves into attempted homicide as both the plot-line and Marin mature throughout the twenty-six episodes. To even the good-guy/bad-guy balance, the lovable make-shift family from the tenement add to the overall craziness with their "anything goes" attitude. Although the only believable tenant is Marin’s grandmother, the comical neighbours come into their own as they reflect the writers’ twisted visions.OverallStill unsure as to the target audience of Brigadoon, I finally settled on the show being a success and able to breach the generation gap, as it offers something for everyone. With a mix of childish looks and vocal overacting, there is a certain ambiance that may put off the majority of serious anime watchers. However, looking deeper will reward the steadfast with a complex tale of love, war and journey through puberty. I hope that this review reaches at least a few viewers out there and inspires them to sample the delights on offer, as this is a show definitely deserving of cult status.

Although Sunrise is responsible for the oversaturation of mecha, they did lots of bizarre series over the years, which are as different as they are flawed. Amongst the most known rough jewels were directed by Yonetani Yoshitomo, who likes to combine childish naivety with dark and depressing stories. Brigadoon is one of them and it’s hard to explain why it’s so good while being so bad. It’s so easy to misunderstand it by the cartoonish bright colored artstyle. Almost everyone will assume it’s kidstuff and not bother with it. The few who will try it out will be confused with what it’s trying to be, since it is full of nudity, mass destruction, and tragedy, while also playing out like a cheesy shojo romance. It’s a great blender of ideas that did not found a way to uniform them properly, like Vision of Escaflowne did. It constantly jumps genres, and does not have a certain age group, meaning it’s not trying to be mainstream and has constant mood whiplashes. The complete lack of mention by retro fans and the mediocre average score are only adding to its obscurity.So if it has so many issues, why do I make it sound like it’s worth a shot? Aside from how unconventional it is for someone who got fed up with formulaic anime, it also has a wide scope and the main characters are very likable. The stakes are high, it is brimming with creativity, it never stays the same for too long thus becoming stale, and it’s so full of mystery, dementia, and intrigue. This is what people who are fed up with anime and are about to give up on them, watch to have their interest rekindle. At the same time, it can make people drop anime because of how offending it is with its constant lolicon and yuri overtones, which can be very cringy, as well as the high amounts of plot armor for the main characters, who early on let you know they will never die no matter the ridiculous amounts of damage they receive. Despite all that, it manages to achieve much more in terms of overall presentation. It’s not just loli torture porn ala Elfen Lied, and it’s not random bullshit strategies ala Code Geass. There are robots, and explosions, mass destruction, most of which need tactics instead of raw power. It never feels pretentious in its themes, or begs of you to take it seriously. The cartoony artstyle is giving an extra punch to the jokes, and at the same time nobody is just repeating the exact same joke without offering something more to the plot. There are even many scenes of calm everyday life, with many locations and events being based on actual places of our history. It feels holistic, not neglecting something in favor of another.But I fully understand the issues many others had with it. The transitions from one thing to another are not done very well, the animation is not always on point, and the creepy fan service could have easily been toned down without damaging the narrative. You need a very specific mindset to get into it, which is something most viewers cannot do. They just want to see generic bullshit with predictable storylines and get easily confused with anything that is different. And I am not trying to sell the show like some sort of underrated avant garde piece of fine art. It’s no Fooli Cooli or Tatami Galaxy. It has lots of issues, yet as a whole it doesn’t feel forgettable as most other series, or that offending as most light novels which are full of deviance yet try to sound serious and deep.It’s a jewel in the rough, which I will always adore for how different it was, for its mesmerizing opening song, and the broad scope of themes and characters. It’s unpolished, but it’s no train wreck. It’s partially sleazy, but it’s also packed with a lot of creativity. Its characters look cartoony and there is a lot of slapstick comedy, but they are not one dimensional and there is a lot more than simply throwaway jokes. It’s very hard to recommend it to anyone, and it has way too many highs and lows to be considered a great series, but for those who seek something special, this is a fine choice. 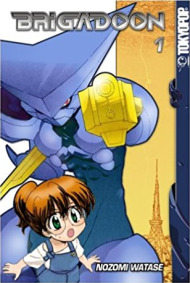