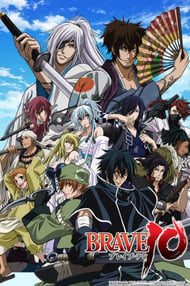 Life is tough during the Warring States period of medieval Japan: lords battle lords for control of the country, while samurai and mystical warriors do their bidding from the shadows. Backstabbing and betrayal are common, and legendary ninja Saizou Kirigakure has had enough. He lives only for himself - until a girl with a mysterious dark power falls into his arms. Saizou quickly finds himself dragged into a struggle between powerful warlord Ieyasu Tokugawa, and the strange but alluring Yukimura Sanada. He becomes one of "Sanada's Ten Braves," who use their mystical powers and ninja abilities to protect the people and things they care about the most.

The Souls of the Gods

The Heart of the Dragon

The Birth of a Warrior

The True Face of Ice

The Start of Tragedy

The Wail of Darkness

The Warrior of Light

Story: The MC of Brave 10 is an Iga ninja named Kirigakure Saizou, who meets an Izumo priestess named Isanami as she's attacked by assassins and he saves her from them. Isanami is on a short journey to go see Sanada Yukimura. Sanada Yukimura is a powerful warlord in the Sengoku era and Isanami is going to see him because her shrine was destroyed by Ieyasu Tokugawa and everyone was killed except for herself. She was told by the head priest, before he was killed, to seek out Sanada for help. Meanwhile, Sanada has been gathering ten warriors known as the Brave 10, who have the power to change history. As they gather one by one, Isanami's own mysterious power awakens. Because the anime was only twelve episodes the anime goes by pretty quickly but I throughly enjoyed the story to Brave 10. I thought that it was quite unique and I never got bored while watching the episodes. Animation: I really enjoyed the animation and thought that is was very well done. Sound: I enjoyed the majority of the music and positively loved the voice acting. . .especially Kamanosuke Yuri's voice it suited that particular character to perfection. . .it only added to the mystery of Yuri's character lol. Characters: The characters were, for the most part, fantastic! I enjoyed Saizou's rough personality and his sense of honor. I personally didn't care for Isanami, but I LOVED Kamanosuke Yuri and often found myself getting all giddy whenever he came on the scene lol. I liked how different each of the Brave 10 were from one another and enjoyed each of their individual personalities and odd little quarks (especially Yuri's! I did warn you Yuri was my favorite didn't I. . .).                      [my Kamanosuke Yuri fangirldom shining bright and true lol] Overall: I really enjoyed this anime and sincerly hope that they make another season. . .

Pretty decent anime for a reverse harem theme, Alot of hot bishounens :) so girls are going to love it. Entertaining action scenes, the characters are the best part. They all have their own personality, and very well drawn. The Main girl Isanami shes kind of annoying but not to bad. Their are other female characters in the anime, my favorite was Ana. She reminded me of someone from Dead or Alive video game. Overall the anime is pretty decent to watch for 12 episodes. I have a feeling there is going to be a 2nd season just the way it ended. 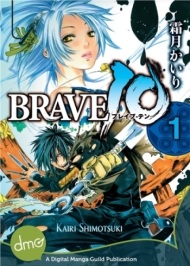 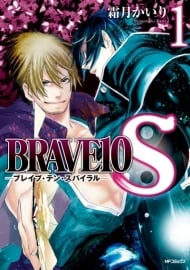