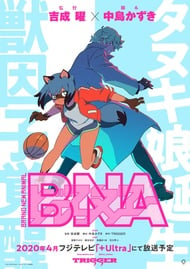 In the 21st century, the existence of animal-humans came to light after being hidden in the darkness of history. Michiru lived life as a normal human, until one day she suddenly turns into a tanuki-human. She runs away and takes refuge in a special city area called "Anima City" that was set up 10 years ago for animal-humans to be able to live as themselves. There Michiru meets Shirou, a wolf-human who hates humans. Through Shirou, Michiru starts to learn about the worries, lifestyle, and joys of the animal-humans. As Michiru and Shirou try to learn why Michiru suddenly turned into an animal-human, they unexpectedly get wrapped up in a large incident.

This show, especially the last episode, felt like a love letter to studio trigger, by studio trigger. If you look closely, you can see little elements and charms from previous studio trigger series, and they managed to show that you can still feel the studio trigger charm, without the controversial sexualization.  The story tackles problems such as racism and prejudices, without feeling like they were shoving politics down your throats. It has a fun cast, with bright, studio trigger feeling colours, and a wide range of emotions. It's also shorter than the other popular studio trigger series that we are so used to seeing, so you could easily binge it in a night or two. Yes, it is a show full of furries, but it is very easy to forget that it is in fact, a show full of furries, so I am sure that people who do not like furry content, will probably be fine with a show like this. This show is a show you can show to someone you want to share the studio trigger charm with, without being questioned your sanity! What more could you ask for?? Be careful listening to the OP though, because it really is an earworm! (Lol) So do I recommend this show? Yes, absolutely.

The overall story seems disjointed. It almost seems like they wrote it as they went along rather than having planned out the plot in advance. That being said, nearly every single episode is satisfying in some way. It delivers on action, excitement, drama, and even mystery to a small degree. While the artwork is lo-fi, don't think the artists were slacking. It was certainly a choice that serves to immerse the audience in this world. The animation is top-notch. It's definitely been influenced by western cartoons which contributes to this show's unique visual personality. The characters actually have depth. Nobody is stagnant. Whether this is due to actual character development or the unveiling of new information to the audience depends on the character. The soundtrack and effects were great. The musical scenes, which were few and far between, always seemed appropriate and never felt forced. The leadup to the finale was totally tight butthole in spite of being incredibly predictable. I never thought this would turn into a thriller. Unfortunately, the last episode was marred by an unfulfilling conclusion, likely due to the writers only having a single episode to wrap things up. They even went so far as to skip the intro to pack in more content. It really seems like there should have been 1 or 2 more episodes. While the end was still satisfying to some degree it could have been substantially better and is practically the only reason this doesn't have a perfect score. Overall, 8.5 out of 10. Definitely would recommend to anyone regardless of their tastes. It's got something for pracitaclly everybody. This one's going in my top 5 single season animes.

After getting a notification by Netflix (which I normally ignore with a passion) and checking out this anime's trailer, I instantly put in on my "Want to watch" list and began clearing up my "Watching" list to find time for this. Story I'm not joking when I'm saying that I never was this thrilled, purely by the intensity of the plot in an anime. It had tons of action even to an extent that I just had to take a break for a few minutes, because, whatever was the most likely thing to happen next, was too much for me to deal with. The general storyline includes a lot of plot twists, but the main downside is that you often see them coming. As soon as you get some new information, if you think about whatever happened a few episodes ago, things seem to fall into place, way before the character(s) realize. The only other thing that's kind of "meh" with the plot, is that, altough the action was really intense and it had me stunned, it had no emotional impact on me whatsoever. The only reason for that, which I can thnk of, is that maybe it's my fault for not having created a deeper bond to the characters, but I doubt that it's rare for that to happen. Characters The main characters all had a clear personality and typical string of behavior to them. Also, the great variety in character design, which was complemented by the human/animal shift, even made some minor characters unique and memorable. But speaking of minor characters, they all were quite flat in terms of personality, although the cast isn't even that big. Cowboy Bebop for example, has ~millions of characters which all have their own individualities. I think one thing which led to that, was that, altough the minor characters did a lot of stuff, which to some extent might even have been important to the story, they rarely showed reactions as in face expressions. These help out a lot to learn more about someone's thought process, without ever hearing a single monologue from them. Animation This is the first anime I watched, which kind of has a more of a cartoon-esque animation style (in my opinion). The upside is, that I feel no shame when watching this. With almost all anime I watch, I have this feeling of shame when watching them, because I know that they're very much not appreciated in the society, so I would try my best to hide others from seeing me watchig them (btw, JoJo is the only other exception I can think of, but that's because of the plot). I almost behave as if it's NSFW, but that's not a problem with an animation style like this. Oh and one more important thing: I absolutely LOVE the vibrant colors. It's something that fits the animation style perfectly and was implemented very impressively. The downside is... non-existent (yay). Oh actually, people who are always on the look-out for female body parts will be disappointed terribly. And I just wanted to add: Michiru looks so cuteeee UwU Sound After listening to the opening [Original Song // Michiru Kagemori - "Ready to"] once again for this review, I have to admit that it's a goddamn banger (in my opinion). Because Netflix unfortunately takes the job of skipping the opening out of your hands, I feel like I've missed out on the song a bit, but I added it into my playlist so I'll get my enjoyment at a later point in time. The ending [Shin Sakiura ft .AAAMYYY - "NIGHT RUNNING"] is a even better song though (in my o-... yeah). I can imagine this song playing on some GTA radio station, if the lyric weren't in japanese. It's very nice to listen to (and it has secured its place in my main Playlist). The BGM generally had a good variety, as I never conciously noticed anything repeating itself. HOWEVER, for some reason the dudes at Studio Trigger thought it would be a good idea to use the ending song as a nostalgic plot device, which was played 4 times (+ the opening was played once) during the episodes. That kind of dried out the ending song, but it's not that big of a deal. Final words The story, altough predictable in some cases, stays very interesting throughout the entirety of this series. The characters have untypical looks which make you more interested and intrigued. The animation, although not the norm for modern-day anime, looks amazing. The sound, in terms of OP and ED, definetly is a must-hear (in my opinion). All in all I'd say that it's absolutely worth it to check out this short, 12 episode adventure on Netflix. I even had a huge selection of dubs and subs to choose from, in case you want to use this to learn some different languages. 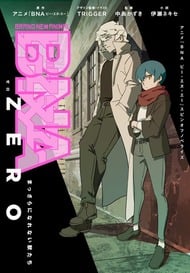