In a possible future, mysterious devices called plates create robotic "Antibodys": Brain Powerds, or Grand Chers. In this world, a monumental structure known as Orphan lies at the bottom of the sea, slowly making its way to the surface to fly into space; however, its success would result in the death of every living being on the planet. Already, natural disasters are prevalent due to its ascension. In order to stop Orphen from obliterating humanity, the organization known as Novis Novah uses Brain Powerds to battle it, while Orphan searches for more plates and defends itself using Grand Chers. In the middle of this war is Hime, a girl who found and mastered a Brain Powerd on her own and joined Novis Noah, and Yuu, a boy who has served Orphan all his life but now decides to escape and fight alongside Hime. Can these two young people make a difference in this war? And what is the true purpose of Orphan?

Man, was this one a drag! It gives you the impression that it will be an interesting and weird series but in reality it is totally boring and simple. This is one of the worst titles Tomino (the Gundam dude) ever made and studio Sunrise was out of its mind when it allowed for this thing to be made. ART & SOUND SECTION: 5/10 [Awesome intro, lukewarm viewing.] Hell, the intro was full of naked chicks and weird imagery. And the song was catchy too. It really managed to make me interested in the series. And then the series begins… And it’s nothing much to look or listen to. Where is the nude? Where are the weird / spiritual backgrounds? -The general artwork is just your average looking mechas, military bases and rural countrysides. -The character figures look very generic. -Motion fluidity was kept at minimum. -Colors and details are done in simple ways. And the visual effects are very crude. Just laser beams and energy barriers for a few minutes per episode. Even the funky disks that were creating meckas wore off quite soon. -On the flip side, voice acting was decent. And the context of the dialogues was full of science, metaphysics, teen angst and more. Too bad even that was ruined by repeating words. Terms like ORPHEN, BRAIN and BIO-ENERGY were spoken at least 20 times per episode, making the dialogues quite repetitive and tiresome.Final saying: Although not bad, the graphics and sounds are quite distasteful for their time. STORY & CHARACTER SECTION: 3/10 [Interesting story, snoring plot.] The story? Alien powers threaten the balance of the world and a team of teens piloting mechas tries to salvage bio-energy disks and prevent the destruction. In the same time a secret organization plans to release an alien ship that will devastate the world, save for its chosen few believers to the cause. It’s not a typical “one-eyed monstrous aliens vs kind-hearted humans” story. It’s selfish people vs selfish people, so it is quite dramatic at times. The alien part is a plot device rather than the main story. The main theme is not really “saving the world”. It’s more like “mommy doesn’t love me” and “my family is obsessed and lost its way” kind of story. The several flavor details concerning science, philosophy and mystic powers help to create a very good founding for an interesting story… But what was built atop that founding was without an architect’s supervision. -The characters are cardboards. Stereotypes that you can find in most mecha series. Undeveloped to the point of not caring about them. With generic looks and movements. There is no reason to remember any of them. -The story is so slow-paced that could easily be summed up in 6 episodes. It really didn’t deserve 26 boring episodes.-The battles are awfully simple and short. I skipped them without missing a thing.-The conclusion was sudden and rushed. The producers must intended to create a movie sequel to wrap things but eventually didn’t; leaving us with a completely vague and dry ending.Final saying: This could easily be made into a fine mini series. Dragging the story with repeating words and boring battles only managed to ruin the show. VALUE & ENJOYMENT SECTION: 2/10 [Low, even for my strict tastes.] I find no value in this series. Characters aren’t there, story is an illusion, ending sucks! It is boring, slow and anti-climactic. The only thing I really enjoyed was the one and a half minute opening song. VERDICT: 3.5 / 10 Quick! I hold him, you bring the tar and feathers. SUGGESTION LIST Successful mix of Mecha with Religion and Metaphysics series: Neon Genesis Evagelion, Ghost in the Shell, Zegapain, Ergo Proxy, Argento Soma, Betterman, Soul Taker and Rahxephon. 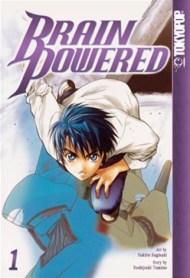