Boys Before Flowers: The Movie - Reviews 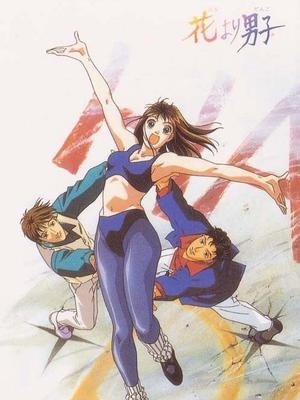 Story
First a little bit of information: this is a story that isn’t related to the Hana Yori Dango TV universe at all. It’s a 30-minute movie with the same characters involved, and they all carry the same personalities as in the TV show. Frankly speaking, there is no way this 30-minute movie can stand on its own. I don’t know whether to rank this movie as a 1) fun "what-if" TV series side story or 2) standalone show that you watch without having seen the TV show. I strongly recommend that anyone watches the TV show first. It will make it a lot easier to watch the movie and will certainly remove all of the "Huh? What? Que?" questions you’ll have. You wont feel connected to this movie the least bit. Watch this movie as a little "what-if universe" piece of animation. I recommend anyone reading this review to check out my TV review for a lot more information about the show and it s characters.

On to the show. The upper class people of the TV show are rehearsing an important Broadway style performance while Tsukushi, a dance trainee who dreams of becoming a star in the future, mops the floor. Not unexpectedly Tsukushi soon finds herself face to face with the rotten arrogant part of the group, and with Tsukushi’s "I won’t let you talk down or do as you please with me and my life" attitude we soon have some drama and tension developing. Not unexpectedly the same dude who sort of helps her out in the TV show helps her out here as well. As I wrote earlier, the characters act like in the TV show.

As a "what-if" side story it’s a good and nice watch and I’ll rate it 7 based on that.
Animation
Following the same style as the TV show, it feels a bit older than it actually is. The backgrounds are almost solely watercolor which gives the show a more softer feel. The character designs are well done and when it comes to facial close-ups it seems like these are the predecessors to the designs the guys who made Sol Bianca and Armitage III â€“ Dual matrix uses. Which brings me to the good points. I really liked how they drew the lips and noses in the close up shots. The lips are clearly accentuated, as is the nose. It’s not like some of today’s designs where you can barely see the nose or the lips. The lines uses for the characters are black and solid ink. There is some recycled animation every here and there, but it’s not bothersome. The dances are well coordinated and detailed. For those who wish to watch the female cast in tights, well here is your chance.
Sound
The sound is pretty much of the same quality as the TV show: a bit muddy. The VAs do a good job in bringing the characters to life and the VA for Tsukusho once again performs well.

The background music is great. It’s a mixed plate mostly with classic pieces. There’s also some catchy saxophone and piano tunes. Seeing as the movie is about dancing it’s only normal to assume that most of the music in the show would be something one could dance to.
Characters
It still managed to convey the essence of Tsukushi: hard on the outside with an attitude and guts on the inside. She has a very "work hard to make life better and pursue the dreams" mentality. On the inside, she’s dealing with emotional turmoil that runs rampant at times, due to misfortunes happening constantly. There is only so much a person can take before even the most optimistic thoughts turns into pessimism.

Most of the other staff are true to their TV show profiles. The true friends are supportive and reliable, the rotten eggs are... well... rotten and arrogant to the core.

I will once again rate this section based on me having watched the TV show first. Even standalone I’d give this section a high rating though.
Overall
This movie was a nice side-story-alternate universe flick which rings true to the Hana Yori Dango TV feeling. It’s very stylish with its darker smoother visual appearance. The relationships between the characters and Tsukushi are portrayed well, with Tsukushi being the one who against all odds keeps on working hard despite her life-situation; she keep on trying and ends up acting very human and might as well inspire weak-willed people to try a bit harder, to not give up all that easy. Once again, rating is based on having viewed the TV show first.

It’s a bit sad that the show is completely over now. But hey, there are 36 manga volumes out there for those who know Japanese, and currently 9 out in English.