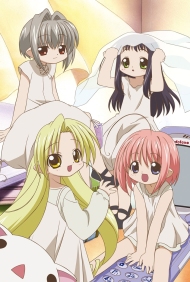 Kururu, Chiriri, Sarara, and Hororo are four faries who aspire to become human. To do this, they leave the fairy world to study for a year in our world. Aided by their friends Sensei-san and Tama, they have fun learning about topics ranging from school graduation ceremonies and sports festivals to romance and caring for flowers. But as the end of the year of study approaches, will they have learned enough to realize their dreams?

StoryAfter suffering through a recent deluge of epically engrossing shows, I was looking for a quick anime fix. Having seen several amusing AMVs related to a short series known as Bottle Fairy, I knew I'd found what I was looking for. However, with adorable characterisation that quickly became a vomit-inducing bowl of sugar-coated aspartame, Bottle Fairy's short length was ultimately a god send. In this case, the AMV creators clearly had far more creativity than a professional production studio. While the story follows the quirky daily adventures of four bottle-occupying fairies, the girls' naivety soon wears thin as sweet innocence turns into borderline stupidity. The pixie quadruplets add their own spin to Christmas, Golden day and New Year celebrations as they interpret many human, and more specifically Japanese, cultural events. I learned a great deal about festivals and customs, and although it becomes obvious that Bottle Fairy's target audience is pre-teens, there is still much a non-nippon native can glean. As an older viewer, I found the childish jokes to unfortunately be hit and miss; while I sometimes cracked a smile, the puerile shenanigans and trite one-lilners mostly caused me to frown in disbelief or gaze with a blank expression. Bottle Fairy's writers had every intention for viewers to fall in love with their adorable and innocent creations, but any self-respecting pervert will instead see them as a lolicon's dream. In particular, the July swimsuit episode screams more of fan-service and less of cherubic purity. Numerous costume changes are quite often the focus of a pretend plot-line, adding to the paper-thin story. Every episode consists of a rinse and repeat visit from the farie's neighbour, Tama-chan, who sets the dense girls into a spin as they attempt to understand her lacking explanations. To top it off, the ending feels far too sudden; although the final episode holds a glimmer of promise that would benefit from a second season, the banality of the preceding twelve-episodes make me question my own conjecture. Perhaps it's because I’ve indulged in too much cuteness recently - the exceptional Shugo Chara Doki topping the bill - but Bottle Fairy proved one of the weakest moe comedies I have seen since Paniponi Dash!. Cuteness and silliness without substance does not a good anime maketh.AnimationClean lines, bright colours and a simplistic artistic approach suit the overall tone of the series. The diversity of the mystical girls culminates in four identical faces framed with different hair and blotches of eye colour. Although simple and inoffensive, the artists take no risks with the artwork; routinely recycling the backgrounds, very little variation is furnished on the visual lives of the fairies. Instead, the show focuses on the chibi mannequins parading round in charming cosplay-type outfits.SoundIn a heroic attempt to sample more animation with a dubbed cast, I plunged into the deep-end to embark on what can only be likened to a painful crawl through a bed of nettles. For some reason, the Japanese language and seiyuu always seem well suited to the high-pitched kawaii-ness of young girls - if only this were true for the English voice actors. Instead, the sub-standard vocal performance heightens the shrieky shrillness of the fairy four and makes me question how these people make a living out of a career in dubbing. Chock-full of intelligent lyrics such as “Lan, lan, lan, la, la, la” sung by Chipmunk wanna-be’s, the opening track is going to appeal to only those with hearing impairments. For people with more reasonable musical tastes, be prepared to skip the first one minute and ten seconds of every episode. However, the lyrics should be read at least once to get the background to the bizarre story. The closing track is bearable, consisting of crooning romantic lullabies that help obliterate the aural rape that came before.CharactersBottle Fairy, as a story written for younger viewers, moves the focus away from character development and instead becomes a competition to discover which charismatic sprite you prefer. The fab four each have their own distinctive personalities designed to make the viewer favour one of the group. I found the militant Sarara the most affable, with her determination and drive often causing trouble for the innocent additional trio of sprites. Although, this was not a difficult choice when faced with the backward Hororo, bossy Kururu and overly emotional Chiriri. The idiosyncracies of each fairy complement the others perfectly and the teeny troupe would be engaging, if not for the fact that they irritate the hell out of you. To make matters worse, the girls’ human companion, Sensei-sama, serves no real purpose in the show. His two-dimensional character could be easily replaced by a non-speaking cardboard cut-out and nothing would be lost.OverallFor a show aimed at a juvenile crowd, Bottle Fairy lacks action/romance/comedy/plot-line to appeal to most anime fans. That said, there is a certain innocuous charm in a show that will teach the viewer much about Japan. If there was a little less immature comedy and a little more character development, this could have been an excellent gag-filled apprenticeship in culture. Instead, frivolity takes the lead, both obscuring the dainty leading ladies and making Bottle Fairy as a whole an annoying chore to watch, rather than a pleasurable pastime.

First off, this is really stinking cute. It really was created for little kids to learn about their culture and in turn, it actually helps us understand a bit. It goes threw the 12 months and what happens in each month in Japan. It has a little bit of comedy in it, more in the sub then the dub because of word plays. The English does still have Japanese words in it and try to help explain them but it’s somewhat hard to understand when some of the pronunciations are off. One thing that I do wish they would have done was explain how they came to be and how they found Sensei. I also wanted to know what Sensei’s real name was.The characters are easy to know who is who in personalities… infact, most of them can be seen in Lucky Star as well. Kururu sort of becomes the leader for most of it, rather athletic and loud. You can see her in Konata Izumi though not so much an otaku. Chiriri is the sweetheart, think Miyuki from Lucky Star if you need to. She is sweet, gentle, and motherly. Sarara is pretty much the Kagami of the group. She is pretty much a harsh character at times similar to a boy. And then there is Hororo… and she is sort of like Tsukasa and yet like all the others together. She is very spacey, always hungry, and extremely quiet. I guess you could say she’s the slow one.Tamachan is really off. That’s the grade schooler next door. She always says things that sound really smart and I guess if you were not really up to par with culture, you might think what she was saying was true some of the time, but she really isn’t right. She says a lot and yet doesn’t seem to say anything at all sometimes. Every once in a while, she will be right in some things.The art style is very moe. Those that don’t like moe will cringe and maybe weep if they had to see this. Colors are pretty much all pastel and gentle, there are three primary colors that are all over and each one goes for a special character, Kururu is blue, Chiriri is yellow, Sarara is red, and Hororo is green. Each in turn, you can sort of tell when someone is the main character on screen from the background.The music is alright, though the opening is a little bit sappy. It really shows that it’s for little kids in that aspect. In the dub, the Sensei sounds a bit dopy and not as good as in the sub. The girls also sound a bit too high pitched as well. They don’t really say the names right and the pronunciations also lack. Things just seem a bit off in that aspect. It wasn’t one of my favorites for the dubbing and I liked the sub better.

Kururu, Chiriri, Sarara, and Hororo are four fairies who live in bottles on a student's desk. With each passing month, they learn more about the human world from the student and a girl who lives next door. Their misinterpretations of various Japanese customs and celebrations are a source of light-hearted comedy. This is a ludicrously cute anime, but it's pretty fun to watch. The episodes are only 12 minutes long.