Alt title: I Shall Never Return 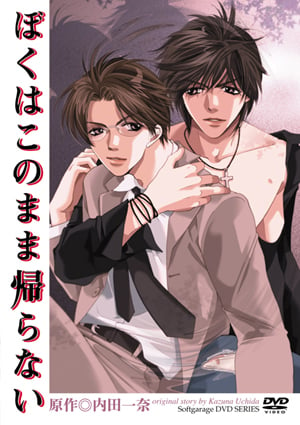 Bear in mind that this is written from the perspective of someone with no previous experience viewing Shounen-ai.

KonoMama is a lust story which is billed as a romance. It explores the romantic and sexual lives of two males and one female who have known each other from childhood. Given the short running time, the plot is relatively interesting and explores some of the finer dynamics of sorting out one's sexual affinity.

The focus of the story is placed on the stress such a process puts on those around us, and this is relatively successful, with the writing avoiding some of the more obvious cliches and pitfalls of such an effort. The execution is somewhat marred by a couple of unwisely crafted clip sections that take up valuable time in what is otherwise a succinct and almost poetic viewing experience. The only events that could be classified as twists in the plot are logical, but tame and don't really contribute much to the drama. Despite the story's shortcomings, the conclusion feels well thought-out and even somewhat satisfying.

Animation 6/10
The characters are all distinctly drawn and easy to read. There's an obvious lack of moe and other visual cliches that post-date the production; that said, this OVA is without doubt old and beginning to show its age. There's nothing that really makes any of the characters stand out from similar portrayals in other productions; and while some attention is paid to the beauty of outdoor landscapes, all of the interior and night-time scenes are about as dull as can be.

Not a single musical moment in the score managed to wow me or for that matter really appeal in any fashion. It seemed as though efforts to sync emotional moments with appropriate music were half-hearted at best. That said, more or less all of the '80s synth beats and dance tunes were tolerably bland, with nothing that stood out to me as offensive or made me want to stop watching.

Aside from minor bit parts, the seiyuu are decent to good at their work; however, with so few moments of emotional poignancy on screen it doesn't feel as though they're given enough of a chance to shine.

For a production that's billed as a romance, there was a decided lack of romantic motivation on display. Granted, it's very difficult to delve deep into the heart of any character in the 28 minutes they chose to devote to this effort.

The female 'third leg' of the romance triangle, Moeko, is probably the most developed character overall, and she holds her own quite effectively - being the only person to show genuine human pain or affection, and even having some marked insights into the lives of the two male leads. However, what does it really say about your characters when the person most worth watching isn't even set in a leading role?

In the end I found the OVA to be a somewhat interesting diversion, but nothing spectacular in any regard. For my first experience with the genre it was somewhat bland, but it did leave me open to the possibility of finding something more enjoyable in the same vein.

It's quite funny and all but the storyline is pretty weak, even for a YAOI anime. (Note: When I watch BL I don't want to see any annoying straight love action...)

Also: It seemed a lot like they tried to squeeze every possible scenario into 25 minutes!!