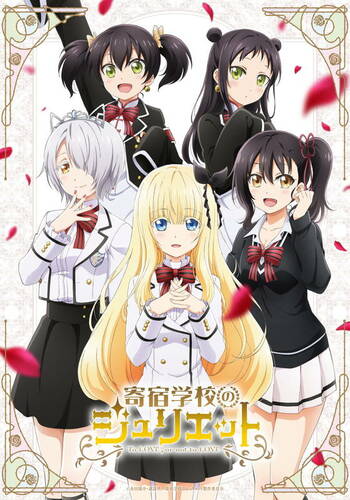 This anime is one of my favourite, there is a plenty characters that you like and don't like, really good romance/rivalry and TON of humour, it's one of the funniest anime I've seen.

I can't believe I watched Goblin Slayer over this in 2018, just watched it recently in december 2019. The problem with this anime ... is it has just 1 season.

People say it wasn't popular in Japan. Internationaly it was a super popular in 2018 Fall.

This makes me sad, despite not having 2nd season and left completely open.. it was still 10/10 for me. This anime satisfied me.

For starters this not your normal Romioxjuliet story,  It focuses more on the romacome than the bureaucracy and drama, in my opinion the anime was pretty decent and enjoyable, it was quite enjoyable to have the not dense MC that does what he has to do when it's required, although there's a bit lacking in his personality but in my opinion that let a space for character development which was apperant through the series, heroine wise it was just as satisfying Persia aside from her cuteness, her personality is quite likable, even though she wasn't aware of her feelings toward romio she accepted his confession in order to see how he will change the world, she becomes more aware of her feelings through the episodes  knowing more about romio and how much he will go to ensure her happiness and safety which made her want to do the same for him, although the anime major aspect is the light-hearted romance comedy yet it wasn't confine at that, there's the hint of drama here and there between rejections, conspiracies and so, adaptation wise the anime was decent covering the important part of the manga,, although the OP song was kinda misleading, since it let you think that a certain part will be included in the anime where it won't, well i just hope that you give it a chance and enjoy it as much as i did

While the anime "Kishuku Gakkou no Juliet" a.k.a. "Boarding School Juliet" is a romance story similar in some ways to the classic Romeo and Juliet, it is not a completely sad story, being more about how you meet obstacles in life and it can be entirely up to you and the effort you put in overcoming them.

The story is about a guy Romio INUZUKA, belonging to the "Black Dogs" faction, who was secretly admiring a girl Juliet PERSIA, belonging to the "White Cats" faction. As their factions are rivals, he was never able to express his feelings towards her as it would spell betrayal to fall in love with the enemy, not only for him, but for her as well if she were to accept his feelings. The only way they could ever have a relationship is if they keep it secret, but obviously that brings lots of issues with it, and there is no way it could be future-proof, unless they have the power to change the world.

The characters are not really that complex, although some of them come with a twist, but you can figure them out rather fast and I would've preffered to see more growth in them. Because of this, their progress towards their actual goal felt rather stagnant. There is not much to be shown in their developement and until the last few episodes, as most of the shown story is about them trying to figure out how to be together, rather than actually working towards their goal. While they do overcome hurdles, and while some of those do take an important role in their initial goal, it still feels like the progress towards it is lacking. Maybe a second season would cover that up and focus more on their personal growth towards accomplishing their ideals, rather than accomplishing their love desires (no, not that kind of  "love desires").

In the department of sound and animation it is what you would expect from your average anime. Nothing in particular to be bothered with, but nothing revolutionary either. Although the sound sometimes felt off for the scene, I don't think it's a big deal.

It looked to me like it was a comedy with a (forbidden) love theme rather than a love story, as things are seldom treated seriously, but there are scenes that do leave an impact if you get into the story. While it has its fun moments that distract you from their actually sad situation, when it comes down to it, it can bring out the right feelings. It was rather enjoyable and somewhat relatable, however this can be only said subjectively. You should give it a try if you're into love stories with a touch of comedy... or maybe comedies with a touch of love and drama? Either way, I think it was a decent anime regardless of the genre confusion.

It's so completely bland. They take the base trope of a hidden relationship and run it through the mill of every scenario you can think of, while basically nothing changes. The main character is mostly annoying and randomly cool, but the gap and inconsistancy is noticeable and extremely awkward. The main girl is fairly bland, basically upset at pointless things while letting other things slide seemingly at random.

According to readers of the manga, it doesn't really get much better.