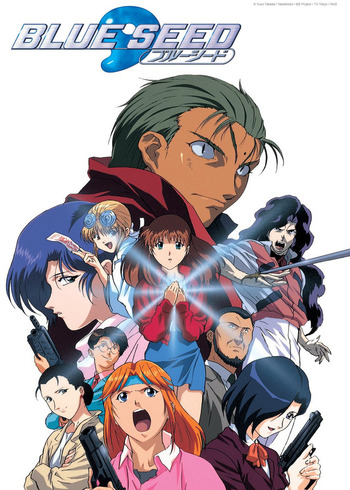 Story
Taking place in Earth, in what seems to be the 80s, Blue Seed follows the story of a young woman named Momiji as she learns of her fate as the Kushinada. Japan is under attack by Aragami, creatures that appear to be monsters, but the general public doesn’t know much about these occurences. The Kushinada is supposed to be fated to be sacrificed, because only the Kushinada can make all the Aragami disappear. For bumbling Momiji, this means being thrown into a life of monster hunting, as well as being paired up with the unlikeliest of partners: Kusanagi, a part human part Aragami fellow.

Blue Seed has two very distinct arcs or stories. First is the monster-of-the-week plotless streak which lasts almost the entire series, at a good 19 or so episodes. The last 6 or 7 make up the only plot driven section of the series, which is akin to something you’d see in X TV or Silent Mobius.

The monster-of-the-week section has some serious problems. First of all, there’s not really a plot. Literally every episode is Momiji finding a new Aragami, and the gang defeating it. This reminded me a great deal of Vampire Princess Miyu TV, a show I absolutely hated. In addition to this boring monster-of-a-week crap, it’s filled with a lot of unnecessary panty shots and fanservice. Not the huge breast type, just the fact that Momiji is always falling down and exposing her underwear. In a story that’s supposed to be serious and isn’t a series that’s supposed to be saturated with fanservice, I found this tasteless and didn’t feel it contributed to the series in a positive way at all. In general, this section bored me to tears and I must say, I had a very, very hard time finishing the series because of the episodic monster hunting. I don’t mind episodic series, so that’s not it at all. For some reason these episodic monster hunts just didn’t appeal to me, even though I’ve liked similar things in the past. The characters were boring, there was no real plot, and in general it became repetitive really fast.

The second section is definitely more interesting, and has a post-apocalyptic type feel to it with plenty of story to go around. Unfortunately, this is only 6 or 7 episodes of the entire series. What were they thinking? It’s one thing to have half filler and half plot, but to have 2/3rds filler and a small amount of plot is ridiculous (especially when the filler really isn’t that good). This horrid pacing throughout the series makes even the last part of the story unenjoyable to some extent, and that’s a shame. Really, this series could have been 10 episodes and would have been great.

In general, the series poorly tries to combine romance, action, and comedy. The romance itself between Kusanagi and Momiji seems childish and forced. I always hate the whiny girlie girl who constantly is screaming OMG YOU ECCHI HENTAI and can’t seem to learn how to act more than 10 years old, and Momiji fits that stereotype perfectly. The best romances are between the secondary characters, which really says something. Comedy-wise, the fanservice is supposed to be the root of the comedy, but it really isn’t that funny. And action? I don’t find attacking a new monster in each episode to be that compelling, and the good stuff doesn’t even happen till the last 1/4th of the entire series.

Thus, a poor score in this section. There are very few series that I’ve seen that have been seriously impossible to try to finish, and that’s definitely not a good thing. I find it amusing that every review I find online gives this series 4/5 or 5/5, and talks so highly about the "complicated" story and great mix of romance and action. I keep wondering if I was even watching the same series! I found nothing so exciting about Blue Seed, and I can’t understand why some people would.
Animation
Regardless of when it was made, I was really not impressed with the animation. First, let’s talk about the ugliest part of the series: the character designs. I couldn’t get Kusanagi’s snakelike eyes out of my head, he always looked somewhat fake because of it. Momiji has the world’s worst head shape, and due to the shading also appears to have no neck. In general her head and face reminded me of some sort of mutated giant turtle. Very, very unattractive. All the other characters looked like, well, badly drawn 80s characters.

The colors used were very dull and lifeless, combining browns, dull greens and blues. Shading was minimal, and action scenes weren’t very fluid. Everything had a grainy look and in general was unappealing to look at. The best part of the series was definitely the monsters who tended to look fairly badass no matter what they were physically. I did like the mitama and what the skin around them looked like.
Sound
Standard boring synths, period. There was nothing amazing or exciting about the music in any way. There was a pseudo-orchestral track that was played quite a bit, especially around the end of the series, that was good but still uninspiring. Stayed in the background, but was too uninteresting to really matter.
Characters
Though we were introduced to a variety of characters, I didn’t find myself becoming attached to any of them. First, there’s Momiji, who had a remarkably Miaka (from FY) type feel to her, something I absolutely despise. The typical girlie girl, Momiji would always be ranting about her panties being visible and was generally useless until the final few episodes. Kusanagi was a bit more badass and quite frankly, I’m not sure why he ever had any sort of interest in Momiji. Why do the whiny girls always end up in potential relationships?

Plenty of secondary characters could be found, including the gun-toting butch chick, a nerdy co-worker, and one of my favorite characters, the agency’s boss. Also, there’s a mystery character that I won’t spoil by talking about him/her, but he/she plays an important part in the series as well.

In general, I just wasn’t attached to any of them. The buildups and situations that occur that are supposed to make us empathize with the characters just weren’t effective in my eyes. The romance between Kusanagi and Momiji seemed force and fake (but it always does when a relatively normal person somehow gets involved with a whiny girl that acts like she’s 12). The characters, though spending lots of time together, didn’t feel like they grew together in my eyes. I don’t know, I was just really disappointed in this area.
Overall
I originally picked up Blue Seed because it’s the top recommendation for Blue Gender, and I really enjoyed Blue Gender. After watching all of Blue Seed I can say that I was disappointed to say the least. The pacing is uneven (and has not enough plot by any means), the character relations were weak, the music uninteresting and the animation unexciting, even compared to other series made in the same time period. It could have been 10 episodes, and it was 26. It could have had a plot spaced out throughout the entire series, and it didn’t. It ended up being mostly an ecchi monster-of-the-week series, and finished off with a better plot arc, but ultimately that still couldn’t save the rest of the series.

I probably would have scored this series lower if it wasn’t so much better in the last 6-7 episodes. If you can handle the monster-of-the-week thing, you might really enjoy these episodes, if you can pretend the previous ones didn’t happen. Otherwise, don’t consider it to be like Blue Gender. If anything, it’s a lot like Silent Mobius, 3x3 Eyes, or potentially X TV (see the Anime Recommendation Database entry for more ideas).

And I still am wondering why so many people seemed to love this series. I guess the mystery will never be solved...

The reviews here will pretty much give you the best report on this show, so I'm just here to throw in my two cents.

I felt the story slugged along as our team of nerds and gunners and our sacrifice girl battled plant-monster after plant-monster, with Kusanagi saving their butts many and most times. I think the idea here was to get you to understand the weaknesses of the monsters and to deepen relationships, but... it's just too shallow and unengaging for you be riveted. Then the story becomes too rushed as the plot actually begins developing and finally leaves the monster-of-the-week theme behind. This new arc centered on saving the world from plant domination, which sounds very exciting! But don't get your hope's up laddy - it's too confusing to follow what's going on and things go too perfectly regardless of the struggles that the cast have.

The characters themselves deserve a solid 8/10 on the generic scale. The romance between the couples gets better later on and felt more natural at least... other than that there's not much special or absolutely likeable about them, which is a great disappointment as usually the characters are what can make up for a heavily lacking plot.

This may have been a bit more than two cents, but basically I would say you can do better than this. This show is an ice cube that fell from the fridge, whose only purpose is to be kicked beneath it and forgotten.

I loved the story. It mirror’s the real folklore even if it is in the here and now. I don’t really like Momiji much. She seems a lot like a whiny little bitch that gets what she wants. She is always getting into trouble and needing someone to save her. She does grow but I don’t think enough. I always get mixed up between the name Kushinada and Kusanagi. They are way to similar and I wish that I wish they could have changed his name so I wouldn’t have that problem. Sadly, its part of the manga as well and so it’s really Yuzo Takada’s fault. There is a lot of talking and when it does get to the fighting, it lacks much in drawing me in. The reason I love this story though is the underlining Romance. It has a lot of couples, from the high school crush to the adult business man love. I also like the little Omake’s at the end of the episodes.

The animation is alright, though very very vintage. Colors are rather milky and dull, sometimes making it hard to see little bits of the show. Sadly, even the characters look rather gray. It skips a lot as well, making the animation look a bit choppy. The designs are pretty much puffy heads and wide eyes for all the characters and a lot of fan service with Momiji. It seems not every girl is in the fan service, just her which feels just wrong. It’s like more care had been done to her skimpy outfits rather then when she is normally clothed. The fighting scenes are lacking in movement and sometimes you can’t tell who is the good guy and who is the bad, making them feel like a big mess.

The voices… well it’s a hit or miss and I like most of the English ones with one or two exceptions. The Japanese feels a bit to stiff then I think it should be delivered but it could just be the amount of business people in the story. There is a lot of taking, and heavy on business and science which does get in the way.