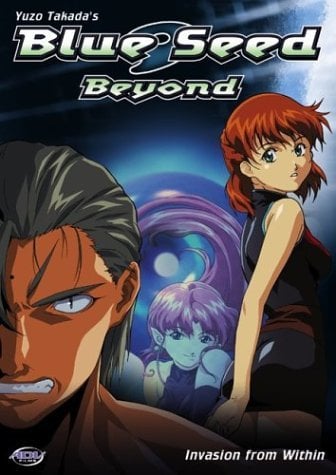 StoryAfter the events of Blue Seed, the Aragami have been destroyed, and the world is safe. Unfortunately, this relatively short period of peace is upset when the Aragami return, this time on the other side of the world in San Francisco! Of course, Momiji and co. go there to check out the threat, and thus the story begins. Blue Seed 2 has some major, major problems. First of all, I’ve never seen a several part OVA (as a sequel to a TV series) work. From Fushigi Yuugi to DNA to El Hazard Magnificent World 2, these standalone arcs always seem boring and uninteresting, and in general, that they were created just to make a few extra bucks from the fans. Blue Seed 2 is definitely no exception, but I found it to be even worse than the typical short OVA following a series for a few reasons. Let’s start with the actual plot. Without spoiling, I’ll just say that the "twist" related to where the Aragami actually came from this time is uninteresting and uninspiring. It really, really seemed like they just wanted to pull out any sort of plot so fans would watch and buy this. Not to mention, the story is less about the Aragami attacking and more about insecure whiny leechy Momiji falling into neverending pits of angst, trying to get Kusanagi to like her. I HATE these kinds of characters in anime series. You know the type: whiny, clingy, insecure, low self esteem, and desperate to get a boy to notice her. In addition, this type of character usually mentally ponders why she’s not good enough for the guy, always is overreacting and seriously has more angst than a 14 year old goth. Admittedly, in Blue Seed, there was a bit of a budding love story between Momiji and Kusanagi, but it turns into a full force soap opera this time around. Quite frankly, I can understand why Kusanagi would have his reservations being with this immature child, given how incredibly annoying she is and how emotionally (and relationship) stunted she is as well. Good god, can you please stop whining for five seconds and beat the goddamn Aragami? Ecchi-wise, there weren’t as many panty shots, but more naked or breast shots. Then the onsen episode, of course, was over the top. Then there’s the fact that the three episodes weren’t a solid arc. The first two had the same focus (figuring out where the Aragami came from, going in depth with Valencia and seeing what’s up with her), but they still seemed a bit disjointed as far as their focus in each episode. Then the last episode was thrown in for pure fanservice and god knows what else. The girls travel to an onsen where they have a bomb threat on their hands. Of course, this involves plenty of ass shots, naked shots, and weird monkey cuddling. This episode didn’t fit with the other two at all and I’m wondering why it was done in what should have been a continuous several-part arc. After all was said and done, I felt that watching Blue Seed 2 was an utter waste of time, and the story was the culprit. It felt absolutely useless in every way, and I wish they wouldn’t have made it in the first place. AnimationThe animation in Blue Seed 2 was much, much better than the original TV series. The character designs looked slightly less terrible, including Kusanagi, who no longer completely resembled a snake. Momiji was slightly better, but still looked like some sort of handicapped giant turtle with her insanely large neck and weird facial features. The other characters were much newer looking, which was a nice change of pace. Colors were vibrant and interesting, unlike the TV series which was dull and lifeless. Detail was done well, backgrounds were beautiful, and overall, the animation was just much better than before. I also enjoyed the monster designs quite a bit. SoundAs with the TV series, the intro song definitely managed to impress. Very 80s sounding but very fitting for the content, as far as I’m concerned. The rest of the music was synthy and perhaps fitting, but stayed too much in the background (as in, I don’t remember most of it because it was uninteresting). Though it seemed to fit the scenes it didn’t stand out in any way, and thus, only slightly above average points in this section. The voice actors did a fine job for everyone involved.CharactersThe characters are back, but that’s about the only good thing I can say about them. Relationships have ended or are on the rocks, Momiji and Kusanagi’s angst-ridden tango is irritating and childish, and in general, there is no new development. That is, unless you count Momiji whining every 5 seconds or thinking she’s useless because Kusanagi won’t give her the time of day! GET OVER IT, YOU LEECH! Seriously, this reminded me of Fushigi Yuugi, which I felt was complete and utter crap as far as girlie romances. Ironic given the plot was supposed to be about Aragami, not middle school dating quarrels. I found the characters to be essentially useless and in Momiji’s case, she made me want to bitchslap her with a textbook for being such an idiot. OverallI can’t give this a score on the same level as such shit as Angelique, so I’ll rate it a little higher at a 3. Regardless, Blue Seed 2 offers almost nothing to anyone, including fans of Blue Seed. If you wanted a compelling plot, you won’t find it here. If you wanted lots of fanservice, you won’t get that either. If you wanted anything other than a back-to-school special caliber teen dating story with angst up to your ears, you won’t enjoy this. The animation is better and the music is decent, but other than that, there isn’t much that’s memorable or even good about this short OVA. If you enjoyed the TV series, leave it at that and don’t tarnish your memories with this garbage.

I’m not going to lie, what the hell happen? I loved the first series and all the fun Omakes that were in it. And then this one came out. It changed the story around badly. The ending of the first one was perfect and really didn’t leave any room for a second series to be made unless they wanted the bad guy from the first one to come back angry again but this one has a bad guy and in America no less. Basicly the whole secret organization that was in the first was picked up and brought to America and I’m pretty sure the American government would have never said alright to this! There is a lot less action and a lot more fucken drama between Momiji and Kusanagi which really makes me feel stupid for even picking this up and thinking it would be good. It’s one of those things that I want to be in my own little world and say that there was no season 2 and there is no way they could make a season 2 but here it is in my face. (God I hate reality sometimes.)The animation is more shotty then Gonzo, which says a hell of a lot in my book. Character designs have been changed for the worse, what action there is (And that is not much) is speed lines, hold posses, and even just cut away’s where they cut to someone talking and then back to the now killed creature.*Face…. Palm*Voices are ok, close to the original if not the same characters but I really couldn’t pay much attention to that as the whole thing was really making me feel sick for even watching this. 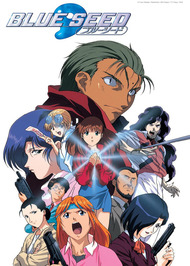 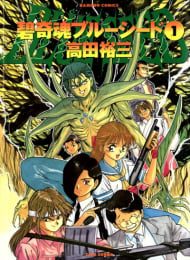