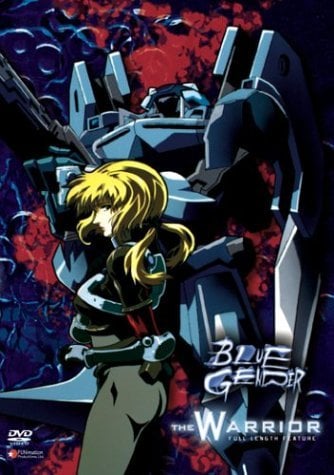 In order to truly review Blue Gender: The Warrior I am going to have to refer to it's predecessor multiple times throughout this review. The reason being Blue Gender is not a sequel, it condences the original Blue Gender into One Movie with a couple new idea's thrown in and a different ending.

First Lets talk about the story. The story folows the same route as the original Blue Gender but it only has 2 hours to finish instead of 26 episodes, it's a given that they are not going to be able to include every awsome scene so I was curious as to how they would go about cutting and how things would progress. During the first 10 or so min. it follows the original pretty closely with the exception of Yuji not pissing himself and having long hair after coming out of those sleep capsules... during this first few min. I felt the movie was an improvement, and although the animation wasn't all that much better, (I think they may have even used some parts of the original scenes.) it still felt better condenced and changed that way. However, after that I started having major issues in how things porgressed. They left many MAJOR parts out of the movie and elected instead to start going into the sickness called Prophesy Syndrome which allowed the sleepers to see things that made people originally think they were crazy. I felt these parts were not a good enough improvement to the story to omit the other content they left out. Key characters such as Elena and the guy who took them to Vikanore space bace were ommited completely. The relationship between Yuji and Marlene was hastened in a not so great way and many of the best scenes between them were also omitted. Each secondary character on the team to rescue Yuji was not seen enough to be able to understand how humanity changed so much and Yuji's conflict with the new way humans were. If you were coming from watching the original, this could be okay with you, if you were only hoping to get out of it a different outcome in the end (no matter how lousy it is). However, as a fan, in my opinion, the movie as a whole was a dissapointment and the ending was one of the biggest disapointments out of the whole thing. I won't spoil it for you. However, should you watch this. Go into it without ANY expectations from the previous Blue Gender.

The animations was sadly not much better than the original... though to be fair it was only made in 2002 vs. 1999 so there's a difference in only 3 years. That being said, I've seen much better animation come out of the early 2000's. Also, it seemed like many of the scenes were just cut and pasted onto the new movie... especially the bacgrounds of some scenes. Overall, the animation did become slightly clearer though and some of the abnormalities had been taken care of in this version.

I rated the sound 5/10 because of a few different things. First, if they are improving things from The original they should have improved Keith's voice in his first appearance in The movie. I couldn't help but laugh at his rediculous speaking growl (english voice actor) which was the same reaction I had when I watched the original too cause it didn't change. Also, the background music especially the fighting blue music is the exact same as in the original. This should have been changed, it does sound like something that would put you on edge but at the same time, it sounds annoying and hearing it too much will give you a headache. Otherwise the rest of the voice actors did a decent job. I didn't really have an opinion of the opening or ending songs.

The Characters are another flaw here, I almost marked the character's above average because I like them in the original. However, based solely on what you get in this movie. Many of them are underdeveloped and lack justification. Also it's difficult to care about some of the characters who are very worth while in the original because they just don't spend enough time letting you get to know them. Also, as I mentioned before, there is a critical flaw in the development of the romance between Yuji and Marlene.

Overall, I'd say don't bother with this one, unless Blue Gender is one of your favorite anime or, maybe it would be better if you don't see the original first, that way you don't have expectations... though you might be confused then.

Blue Gender is a 26-episode series created, co-directed and co-written by Ryousuke Takahashi (Kikou Ryohei Mellowlink, Taiyou no Kiba Dagram, Soukou Kihei Votoms: Koei Futatabi) that was broadcast in Japan from 1999 to 2000. Blue Gender was animated by the Japanese studio AIC and distributed in the United States by Funimation. There is also a compilation movie (Blue Gender: The Warrior). Which I highly recommend you to skip, forget and never watch. Anyways, Blue Gender has quite a story to tell you, which is impossible to show only in one movie. With that being said, only watch the TV series.

Yuji Kaido was diagnosed with a serious disease and since there was no cure for the unknown illness, he was cryogenically frozen. Twenty years later, he wakes up to see the Earth like it has never been before—the humanity is almost eradicated, because of the alien bugs called the Blue. However, the humanity still lives, a few selected humans have retreated to the space station called Second Earth. Yuji is taken back to the Second Earth, where he finds out that there are people that have been also cryogenically frozen and now they will be used as a force to combat the Blue.

The story might sound generic at first and I would agree with that thinking, however, once you dive into the world that Blue Gender depicts, you will actually like it. Indeed, this is something only a mature audience will understand, since the series is extremely dark, violent, and contains sex scenes. However, everything shown in this series serves it purpose. What I am trying to say is that nothing is overused, the story-line has enough unique elements, as well as the fact that overall it makes pretty good sense.

Animation wise, even though the series aired long time ago, the animation is pretty good. From character designs to great action scenes, Blue Gender offers quite good animation, since it is able to set the atmosphere well, being dark when needed.

Sound wise, no voices feel out of place. The English actors show quite a bit of flexibility as they rocket through the almost non-stop action pace presented by the series. So feel free to watch it either subbed, or English dubbed, both versions are equally good. In addition to this, Blue Gender had quite an OST to boast about. Do not skip the OPENING, it is amazing.

The real strength of Blue Gender is the story. Part Aliens, part Starship Troopers, Blue Gender borrows from strong sci-fi thrillers and takes it in a different direction. The story telling is well paced, the cast might look a bit simple and cliché at first, however, the protagonists undergo some amazing development that you need to see. There are so many things that you simply have no time to even breathe and rethink what is happening.

All in all, 10/10. This series is a must see for old school sci-fi fans. Blue Gender even today is one of the most well-written and dark sci-fi stories. Being extremely dark, Blue Gender is the story only a true connoisseur will appreciate.

Story: To sum it up the same as the Animation

Animation: it was a little better then the show more detail but not by much

Sound: spot on with the sound had no problem