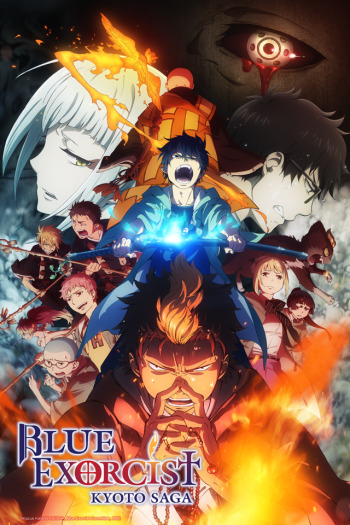 Blue Exorcist is finally back!! This story takes place after the group finds out that Rin is the son of Satan. For those of you who might be confused the ending of the first season was just a filler arc and didn't follow the manga. The first episode does a pretty good job of explaining this by showing a clip of where this story is continuing from.

The animation is beautiful and much better than it was in the first season. The sound is good(still getting used to watching blue exorcist subbed), the song at the end was good, wasn't as great as In My World from the second half of season one.

The characters are good, just that some got on my nerve for treating Rin the way they did and Yukio can still be annoying(still like him as a character).

overall looks like this season of blue exorcist was worth the wait and I can't wait for the next episode.

Stupid sequel.  I hate the "totally ignore the end of the first season and restart from half-way through it" BS. Either stick with what you did or don't bother with a second season.

Finally! This latest isntallment of blue exorcist has brought justice to the most dissapointing uncannon ending of season 1. This installment takes place immediantly as rin losses control and his power is revealed for the first time infront of his classmates. It takes the actual plot from the manga and sticks with it, and for me, that makes me extremely happy. Bringing justice onto the manga and making up for that extremely upsetting and dissapointing plot that followed that event.

I was pleased with it.

Kyoto Saga is an amazing follow up from the first season of Blue Exorcist.

At first, I couldn't get into the story, but as the episodes progressed, I started to like it and got hooked on it. The ending was amazing, and left me with goosebumps.

Rin has developed from the first season, and has become more likeable in Kyoto Saga. All the characters haven't developed that much, and have stayed the exact same people they were from season one, apart from Renzo Shima, who didn't want to help out and is really unlikeable, whereas in the first season, he was willing and caring, and wanted to help out.

The animation was brilliant, and has a fantastic contast of colours.

In advance, I have to note that the season does not follow the end of season 1. Episodes 18-25 were not canon and accordingly, they do not exist in season 2.
Don't get confused by this.

Ao No Exorcist only follows the manga in the second season. However, almost nothing changed. This season had exactly the same problems in terms of characters, story and tension.

The plot was far from creative and nothing developed. In the end there was a final battle against a demon and that was it.

The characters and their relationships were at least somewhat in the foreground, but they all felt quite weak.

Compared to the previous season, this one has almost no qualities. Sympathy was maintained, but nothing could match the average.

You can see the whole plot from beginning to end in the description. The protagonist is suspected because of his origin. Someone tries to animate a monster and at the end there is a final battle. The whole thing was felt with a lot of average conversations.

The animations are a bit duller than their predecessor, but they are still satisfactory and the individual scenes worked well with the musical support.

So far it hasn't happened that the characters have developed great. Hardly any change on the part of this season, except that the relationships had to be maintained again.

The intro was pretty weak this time, both in terms of performance and music. The Osts are still very noteworthy.

I expected more from this season, given that it finally followed the manga. Unfortunately, this arc lacked not only excitement, but actual content. This course of action was very uncreative and transparent from the start.