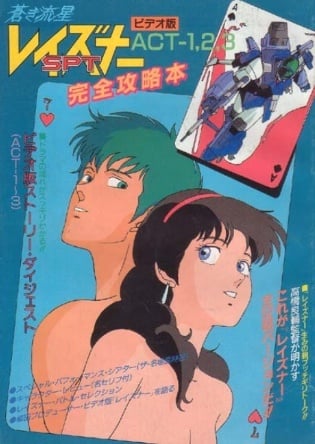 SPT Layzner was originally a 38 episode tv series. The creator of this series is the same guy that created Armored Trooper VOTOMS. This OVA consists of 3 one hour episodes. So you can imagine how much was cut out of the tv series to squeeze 38 episodes into 3 hours. I never watched the tv series, but it's obvious that it's been heavily edited. Characters come in and out with little development other than the main cast.

The story is good. It's set in the future (1996). Earthlings have bases on the moon and mars. Well one day one of the bases on Mars is attacked by alien mechs. These aliens are out to conquer the Earthlings. We meet our main of Eiji, Anna, Roan, Arthur, and others. In the 3 episodes we watch them grow up. We see them take different paths. These aliens share a very important past with Earthlings. We see these characters struggles and nice mech battles.

The animation is very good for it's time. It looks just like Zeta and Doube Zeta Gundam who both came out around the same time and were produced by Sunrise. The mech battles are illustrated with detail and are fast paced. It's a nice looking anime. The sound was good. I really liked the intro and ending songs. The ending song had very nice lyrics.

The first episode is the weakest because it contained 20+ episodes in an hours. It was choppy. The second and third episode are better. I want to see the tv series some day. Though the OVA is compressed and lacks development it's a good watch. If you like sci-fi and mech anime check this out. It has an interesting story and characters. It's also nice to look at. Good music too.