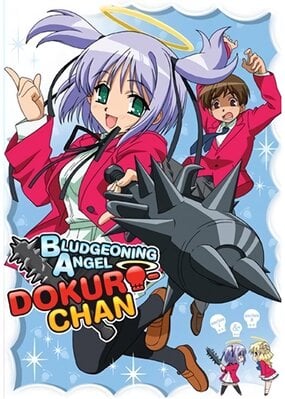 StoryComplex and deep it ain't but the series sure makes up for it with a sick and eccentric premise. There really isn't much else to say apart from what is in the AniRec synopsis without ruining the viewing experience. The story opens innocently enough with Sakura and the girl of his dreams Shizuki walking home to a gentle melodic theme, lulling the viewer into thinking this is another mediocre slice-of-life. Once Sakura gets home, however, the entire series changes to a new and shocking track! It was a wise decision to make this a short series of mini episodes (roughly 13 minutes each) because every instalment stops short of tedium, keeping the viewer refreshed for the next little mishap. It also means the story remains focused on Sakura and Dokuro's relationship, developing it with every gory murder and cute-but-short-lived reconciliation. They even manage a couple of wee subplots with the supporting cast. What I like about this series compared to others of its ilk is that, although silly and random at times, it mostly sticks to definite plotline using coherent scenes. There is a lot of violence, liberal use of bodily fluids of all sorts, and daydream sequences of the Scrubs variety, but never did I feel they served no purpose.AnimationVisually, the series is nothing special, but then that's not what you're watching it for. Big eyes, cute mouths, a heavy dose of ecchi and frequent manic contortions of the face; anything better or more complicated to look at would be a waste of budget and would probably detract from the effectiveness of the humour anyway. Besides, as long as you can tell which part is Sakura's head and which part is his blood gushing out, the viewer should have no problems.SoundThe soundtrack is 99% forgettable (and I swear it was all done on a synthesizer) but, that aside, the OP is what really makes this series. I never paid much attention to OP lyrics before because most of the time they were predictably vague due to translation or inconsequential - I just wanted to like the tune. Dokuro's little ditty on the other hand first makes you do a double-take and then doubles you over with laughter. Definite download factor of 10. The voice acting is suitable and effective. Sakura's speech is often really fast, which I assume has to do with the necessary comic timing (and maybe because he's trying to babble himself out of getting killed), but it directed my attention to the tone and rhythm of dialogue as well as the actual words spoken. Dokuro's crazy giggle during the ‘river' scene was my personal favourite. In any other context, it would have been cute but, at that particular moment with Sakura so obviously frightened, it just conveyed ice cold vengeance.CharactersIt is not the characters we take away from this series, but the humorous situations they find themselves in. Sakura has only one purpose, and that is to be tortured by Dokuro. Likewise, Dokuro exists only to torture Sakura. Their relationship is really like any where a male protagonist has to share life and living space with an uninvited female guest e.g. Chobits but with more, er, domestic unrest. Dokuro, like Chii, can be very adorable in both looks and her unwavering loyalty to Sakura. Her heart is definitely in the right place, it's just a shame about the bat. Sakura is an unwitting pervert with a questionable destiny, but this doesn't really impact much upon his personality in the here and now; it's something to make you laugh, not something for him to agonise over in any meaningful sense. Unsurprisingly, character development has no place here, but with another series to go, that might change.OverallThere really should be another section for this anime titled ‘Humour' for which my rating would be a sick and solid 9. Comedy in anime is all about expressions for me because randomness rarely pushes my buttons. Bokusatsu Tenshi Dokuro-chan has it in bucket loads, and pulls it off extremely well. The only problem might be its rewatchability factor which, as you can imagine, is quite low, but if you wait long enough (say, a year or two) there's no reason it shouldn't tickle your fancy again.

Bludgeoning Angel Dokuro-San was recommended to me as a very funny comedy anime. This is the first anime I have outright dropped in years. Despite that, I believe I can still write an accurate review. It's pretty hard keeping the rage in, but I'll do a proper review. You want comedy? You will only find frustration in this anime. Animation/Sound There's not much to say about sound and animation. The sound is average at best and the animation quality is not even average for a 2005 anime. But, interpret that as average. While there are panty shots, it appeared to me that the ecchi is toned down compared to other ecchi anime, which is a surprising blessing. Either that or I just didn't notice it too much. This anime is available in both English and Japanese. I'll be honest both versions are bad, I hated the voice of one character in the English version and hated the voice of another in the Japanese version. But thats just my opinion. Story Now for the real review, the story and characters (because good animation and music don't make a good anime on their own). The story goes that an angel Dokuro has been sent from the future to protect a certain young boy called Sakura. Another angel, Sabato has also been sent from the future, but to kill him. Why the clash of interests you may ask? Well one of these angels has rebelled against orders. Which one? Sabato? Nope, Dokuro is actually the rebel. Why? The boy she protects goes onto accidentally discover immortality technology. Not a bad thing right? Wrong, the effects of the technology causes all women to stop aging at the age of 12 leaving them as (Moe characters) kids. The accident? The guy was actually researching something to do with Pedophilia, in other words he's a pedophile. Sounds like bullshit? You're on the ball. But wait, the character Dokuro wants to also stop this, its just that she wants to do it without killing off Sakura. Noble intentions? Maybe... Characters As for the characters themselves the side characters are the usual normal folk, though they are all pretty stupid in that they won't believe Sakura, whenever he actually does no wrong. That and all the guys bully him (in the usual cliche fashion) because Dokuro lives with him, apparently likes him and they find Dokuro is physically attractive, so there's obviously jealousy there. Sakura himself is your average perverted schoolboy, yet for the most part he doesn't do anything wrong. All he wants to do is live a normal life and have a relationship with the girl he has a crush on, Shizuki Minakami. Watching this anime, you actually feel sorry for the guy. Sabato is an angel just doing her job to stop Sakura from discovering the fucked-up immortality thingy and in order to do so, Sakura must die. At times she tries luring Sakura to his death using feminine wiles (Sabato is also apparently physically attractive) and you can just tell, its so predictable, of course she never manages to pull it off. At times you just wish she could do it and get away with it. Dokuro is a frustrating character. Also an Angel who possesses a bludgeon called Excalibolg and can revive people. She wants to save Sakura and help him right? Only the former is correct. She is constantly killing Sakura, often for accidentally being a perv like landing with his face up her skirt or noticing her white school uniform is wet, allowing her breasts to show through. She's constantly harming him and killing him for no reason. All the while it appears that she likes him, she even crawls into his futon overnight. But wait, isn't she meant to save him? Her angel abilities allow her to instantly revive Sakura. In other words she is just torturing the poor soul by repeatedly killing him and reviving him, only to later kill him again. The very definition of this character is Tsundere (though not literally, Dokuro has something to do with bludgeoning). I hate this character with a passion. Conclusion This is meant to be a comedy right? It would be closest to toilet humour and literally too as when an angels halo is removed, as well as loosing their angel powers, they also have constant diarrhoea, their body looks decayed and they appear to have a troll face. The constant killing of Sakura at the hands of Dokuro is meant to be funny. Meant to be funny. I didn't laugh once. And its not like I don't have a sense of humour. I laughed at the comedy bits in Angel Beats, I laughed at so many of the parts in Kare Kano. I even remember laughing a lot during Baka & Test. Heck I laughed today at, what some would argue to be, childish humour on a youtube video. If this isn't funny then whats the point in this anime at all? Its certainly not the characters since you end up hating Dokuro and its certainly not the story since there is literally no progression. I'm grateful that I didn't just rage and fill this review with 100 lines of 'THIS IS SHIT.' Man was I tempted to. I may change the overall rating once my rage has subsided. Family-friendliness Rating: 3.5/5 The ecchi isn't overboard and there isn't any nudity (lower is better) Overall Rating: 1.5/10 (higher is better)

Bokusatsu Tenshi Dokuro-chan should have been funny and isn't. If you want another yet another ecchi parody. It has another standard doormat male lead that constantly gets beat up and made fun of, that for some unknown reason girls like. Fan service appears, but the bad animation doesn't allow it to shine. The voice acting is terrible, and proudly so. The female lead's voice is downright annoying. The crude animation doesn't help. It is stupid beyond measure in the entire approach. For a 2005 anime, it looks far older than it should. Even the visual gags are outdated. Really, there is no artistic redemption here. Of course, artistic redemption wouldn't have been necessary had the writing been good. The story is terrible, naturally, but as a parody it falls flat, as a comedy it is subpar, and even in ecchi standards it is trite rubbish. This could all have been avoided had the characters had something interesting or special about them. Yet even their looks, let alone anything else, are downright dull. Bokusatsu Tenshi Dokuro-chan is absolute crap, and you would be better served by watching newer and funnier shows with better animation *and everything*. Don't watch this garbage. Modern garbage is better executed. I suppose a decade ago people might have still thought this was funny, but this show aged horribly and should be expunged from reality. 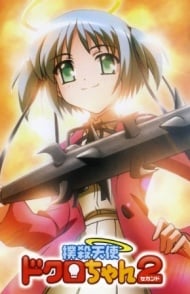 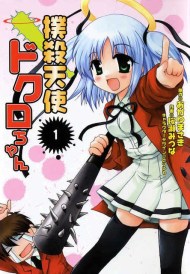