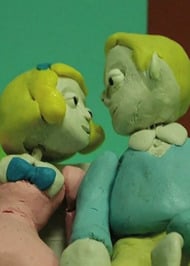 A girl and a boy lovingly sit beside each other in a park and lean in for a kiss, when they are interrupted by a man who pops up from behind the park bench, chopping the boy's head with an axe. Terrified, the girl runs from the boy's lifeless body as fast as she can, hoping to escape the carnage...

Oh, a short anime film that isn't by Yoji Kuri? That's automatically a step up. Story: While the story is very simple, it's still quite engaging for a silent short film. I actually found myself getting creeped out a bit by what was happening. Animation: If you're looking for typical anime then you won't find it with these short films. I'm actually quite impressed by the quality here, this sort of stuff is not easy to do and there is clearly a lot of effort put into it. I also love how innocent it looks at first, it kinda throws you off guard. Sound: The music can be a bit annoying. It starts off rather light hearted but that changes with the story. I didn't really care much for it though... Character: The killer family is fucking creepy. I didn't think claymation characters could be so  scary... I actually found myself rooting for the girl to make it out alive. Overall: I'd say this was five minutes well spent. While it's no masterpiece, there is clearly a lot of effort put into it and it's entertaining enough.

Story: The main story is about a father trying to feed his poor family (and his demon goat). We follow him in his struggle to provide food and shelter for the people he loves the most: his wife and his disabled daughter, who lost one of her eyes in a horrible accident (and his demon goat). The secondary plot follows a young girl trying to hinder the man's good intentions. She breaks into his house, murders him, cripples his wife and terrifies his innocent daughter. She also messes with his goat for a while. Animation: An extremely fluid animation, with a small number of static frames, with clay like characters, that have an uncertain color for their bodily fluids, contribute in creating the gruesome atmosphere of the show. Sound: It is pretty annoying! On the plus side, because it changes with the advancement of the plot, it really helps to accentuate the action. Characters: Not much you can say here. Because of it's short format, we don't really get to understand the motivation behind the characters' actions. We receive enough information, but it leaves us wanting more. Overall: The right amount of blood, information and creepiness for a 5 minute show. Time well spent! Reviewed for Secret Santa 2017

Story: I seriously can't stop laughing at how hilariously bloody and fuckballs disturbing this was. Starts off with a girl and a boy, about to swap spit when OH SHIT A KILLER LEAPS OUT AND KILLS THE BOYFRIEND! Right in the fucking head. With an axe. That pretty much sets the tone for the rest of this hilarious bloodfest, which is about blood. And some nice decorations, but mostly blood and stupidity. Quite frankly, the plot is shit but the hilarious events, that table room and that fucking hilarious ending give it marks. Hilariously fucked up, I should say, and hilarious when you think about it. A pity about the dub being shit, but more on that later. Art: I mistook the purple matter for blood, but it proved to me that blood is still red and that wasn't censorship, just brains. Which are purple. I don't know, but they covered the girl. But the blood, fucking shitloads of it. Lose something? Fountain of blood. No jokes, fucking fountain of blood pours out and they can still get up. Other stuff? How about that crappy ass framed drawing? Fucking shit is what it is and it's near to some abstract modernism piece that deplicts the sins of humanity in the totaliarianism regime of society as a demonic whole. Know what? You're here for the blood in claymation. Sound: Once again, I watched the dub, and it was a shitty ass dub lacking the original's music. But it had some commentary, stuff about rape, bad voice produced music, bow-chicka-wow-wow and apart from that, it's a silent movie. As Popee the Performer mostly proved, you don't need voices for shit. Funny at times, but still pretty crappy. Characters: Her boyfriend for all of 15 seconds looks a wee bit older than the underaged girl. Might be because he's a bit fat around the belly, but it's just kinda creepy. The girl herself shows some promise but is still kinda dumb, the others... creepy as fuck. Except for the older woman, she's got spunk. But that kid, seriously creepy as fuck. That table scene was on the border of hilariously disturbing and for that, most of the points go to him. Or her. It. Overall: I can't score this higher than Chainsaw Maid or constant rape face pig of Pussycat so it ends up with a 6. It's hilarious, it's bloody, hilariously bloody; it's creepy as fuck, you need no morals or lunch, no sense of sanity or anything remotely logical. Tune in for the blood, the creepiness and unintentional hilarity. But it truly depends on your mindset: Either you'll find this hilariously bloody and disturbing, or you'll be disgusted at how people can like this shit. I'm sure you know which group you fit under.