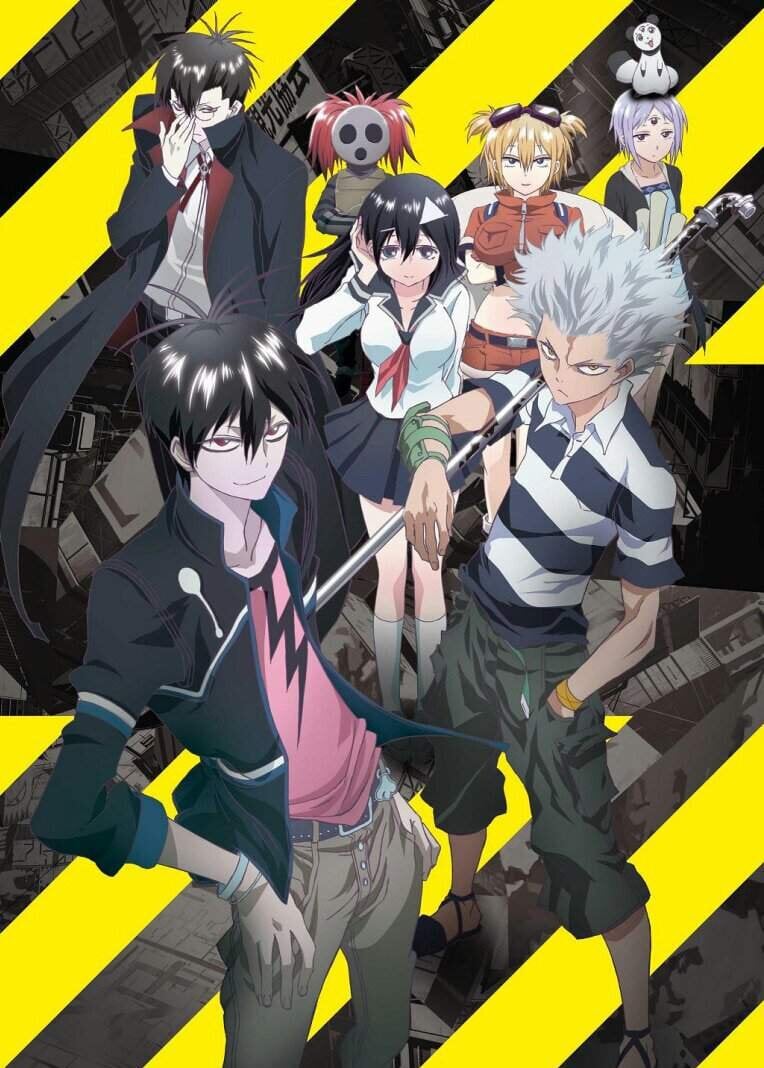 ART: You will most definitely remember the art of this psrticular show. Not because it is bad but because it is so good. With just a few visuals you are immersed in the world of the demons. It helps that the world is very similar to ours but it is still an impressive feat.

SOUND: Music and sound effects were fine. Voice actors have fun with their parts and characters such as these lend themselves to having fun.

CHARACTERS: Main character is Staz. As a vampire he is entitled to living an easy live in the upper levels of Hell but chose to life in the lower regions instead.

Fuyumi is a human girl who finds herself transported to Hell by accident to the utter joy of Staz. As an otaku he wants to know everything about the human world.

STORY: Staz is a powerful vampire noble who lives in the lower parts of Hell where he rules over a small section of it. When a human girl finds herself in Hell he is overjoyed and wants to talk to her about his hobbies. Before he can do this she is killed and turned into a ghost. He then vows to return her to live and bring her home. Unfortunately this means that he has to go home and face some personal demons.

RANT: First off let me state that I reaaly liked the anime. The characters were just the right type of weird and I had a lot of fun watching it. What did me in was the line on the DVD box which stated: Complete series.

This is a lie. As is sadly the case the last few years this is one of the many anime made that is in fact very incomplete. For whatever reason the story just stops with nothing much resolved and you have more questions than answers.

I can not begin to tell you how pissed this makes me. It is a slap in the face of the anime fan to give us such an incomplete story. You give us this amazing world with fun, interesting characters and then flip us off. If I want to know how the story ends all I can do is get the manga.

Fine but guess what? I'm Dutch. Many manga series are out of my reach and the space I have in my room is limited. Pretty much everything I own comes from Right Stuff which is rather expensive for me due to shipping and taxes. So you give me an incomplete 'complete' series and then tell me to get the manga if I want to know the end?

I have 2 words for this. One starts with F and the other starts with Y. You get only one guess.

Blood lad had a bit of everything. Awesome fights, a completely dorky yet awesome vampire (Staz) with amazing powers, which we don’t get to see the full extent of until towards the end but he's got the most wonderful sarcastic dorky personality in the world so it's okay. Some of the characters seem to have love hate relationships which makes everything even more amusing. It's funny; all the other anime/manga reference especially to goku had me giggling. The poor ghost girl has her work cut out for her trying to get herself back into her body with the help she gathers. Werewolves, vampires and various other shape shifters oh my. The story was good from beginning to end (which was open ended and left room for another season which I hope they make). I highly recommend this whether you are looking for awesome fight scenes or humor. It touches on most categories (minor love interest but not the main selling point so don’t worry it isn't overly mushy). All in all a good watch. 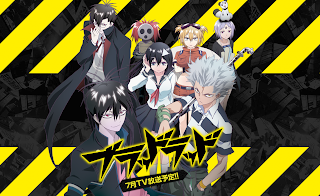 Oh, damn, those vampires again, it seems they are everywhere, and why am I complaining when I am reviewing a vampire anime? First lets make it clear I picked up this only for the fact that it seems like it would be a comedy and for the Seinen tag. Turns out it is mostly a comedy anime but I don't understand why its Seinen? This is typical Shounen manga with damsel in distress formula with a supernatural comedy twist, but definitely not Seinen ( some uncalled for ecchi doesn't make Seinen, sorry), so stop advertising false information. 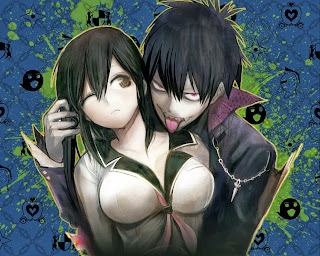 The story of Blood Lad follows our "hero" Staz who is a vampire in the makai(demon world) who doesn't drink human blood & is also an otaku, he is a leader of a small portion of demon world but mostly spends his time watching anime, reading manga and playing Japanese video games. One day our "heroine" Fuyumi accidentally wanders into the demon world and ends up in Staz's territory, Staz is so excited to finally meet a human girl but when he was a bit busy protecting his territory Fuyumi gets killed and turns into a ghost. And thus the story begins as our hero decides to revive Fuyumi into a human again. But wait there is a catch, Staz is not as heroic as it seems, actually he has a strong desire to drink Fuyumi's blood so he secretly wants to resurrect her for that. And thus our heroes trial begins as he tries to find ways to reach his goal. The story was a bit boring at the start but after a few episodes it starts to get a bit interesting, mostly due to some nice side characters most of whom actually are cliche Shounen characters but none the less likeable. The main likeable thing about the story is not its premise or the character backgrounds (which are too generic if you ask me) but the comedic side of it, the continuous pun at typical Shounen's like Staz trying to use Kamehameha was really funny stuff and it keeps the show enjoyable but when the writer tries to make things a bit serous with romance and family chemistry stuff then it starts to fall apart cause the main storyline for this anime is not original at all, we really have seen all those cliche stuff way many times before.
From me story gets 6.5 out of 10.

The characters are not the strongest aspect of this anime, Staz is actually alright when he acts his funny self but his back story and all other aspects of his character are to bland for me but at least he is better than our heroine Miss-I-am-so-innocent-and-dumb-and-typical-with-unnaturally-big-breasts Fuyumi, come on we had these kinds of heroines for so long its just unbearable now.  And those unnecessary ecchi stuff, provocative dresses and shameless fan service is just too awful to waste my breath on.
But not all is lost in the character department either because of some strong side characters, I mean Braz, Bell & Liz are almost impossible not to like and although a typical rival character I did like Wolf, and other side characters like Staz's gang members (Deku,Saty,Yoshida) were written with quite a lot of care it seems. So all I can say about the whole character business is that if Kodama would have given his main characters the same level of care as he did most of his side characters it would have been a way more better anime in my opinion.
The characters get 7.5 out of 10 (and that's mostly for all the characters minus the main two). 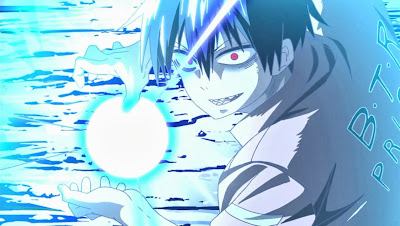 Unarguably the animation is top notch and the best thing about this anime, the action sequences are colorful and a delight to watch, the character designs are lovely and the whole animation is fluid and crisp, it is one of the things to be amazed of in this show. But sadly that is not enough, you need good story and solid main characters to tell the story with your nice animation.
The animation gets 8.5 out of 10.

Sound
The sound effect is appropriate for the show but nothing that really pullsyour attention into it. The Opening theme is "ViViD" by May'n which is a nice opening for the show but doesn't really makes you want to get the listen to it as a separate form of entertainment. The ending theme is "BLOODY HOLIC" by Yuuka Nanri which is rather bland is my opinion and really doesn't go with the show, it tries somehow force the romance into the front of the situation which unfortunately I say is not the strongest aspect of the show, its the comedy that is, the opening song at least acknowledges that.

The sound gets a 6.5 out of 10 from me (its okay but really nothing to write home about).

In the end of the day the writer did try to make a show which tries a different take on the vampire theme and the otaku twist is nice with the pun at other animes & manga bit is nice but unfortunately it seems that he himself sometimes forget what his initial intentions were and tries to inject serious stuff into the fold and force some unnecessary ecchi and romance into the mix which turns a otherwise quite innovative and fun idea into a cliched mental anguish for the viewers.

Great anime! This one was a sleeper hit for me because I genuinely did not think it would be as good as it was. It's nothing out of this world, but it keeps you entertained all the way through. As the plot developed I couldn't wait to keep going from one episode to the next. The characters themselves are good fun. The romance, however, can be a bit generic. The fights are also well animated and captivating. Alas the worst thing about this anime is that there is no season 2! You are left on a bit of a cliffhanger with the only other option being the manga.

The story was sound but nothing truly groundbreaking, it was well paced and well done. The animation was quite fun and it matched well with the style of anime, but their were a few moments where some of the animation just did not seem right. The sound was fun for the anime and the closing, I was not a fan of the opening theme as it seemed more distracting and flashy then a proper opening. The Characters, while very well done, seemed to be the same types that are in most series out there. I did quite enjoy some of the characters that were introduced later in the series and then just seemed to get minor develpoment. Overall it was a fun anime to watch and a good interim anime to watch between large and longer series.