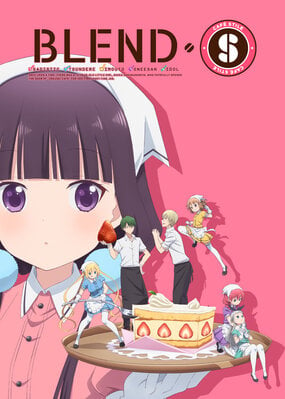 If I had to use one word to describe Blend S, it would be "disappointing." The premise is great and drew me in immediately, but it is executed so poorly. In a show like this, the two most important things should be the characters and the comedy, and the show falls flat on both ends. The two main characters, Dino and Maika, are both unbelievably irritating. They are constantly acting cringey, stupid, and unrealistically. Dino was particularly painful to deal with every time he was on screen. In fact, these two are so poorly written that the only time I found myself enjoying the show was during scenes that they weren't in at all! The rest of the characters are generally more enjoyable than Maika and Dino, but unfortunately they don't get much screentime, especially the most interesting three characters of the show, Mafuyu, Hideri, and Miu, all of whom get barely any development at all. Then we get to the comedy, which is at most points in the show incredibly painful. A lot of the show's attempts at jokes aren't jokes at all. For example, one of the major characters, Kaho, plays a lot of anime mobage. The show has many scenes of her playing these games, but these scenes have no actual punchline, and it feels like the show is trying to say, "Hey, viewer, you like anime and mobage, right? Well, so does this girl!" It gives no real attempt at being funny, instead hoping that being relatable will be enough to get a slight chuckle from the audience. The animation is lovely and cute and the opening theme is great, but these two aspects can't make up for the lack of substance in the rest of the show. All in all, I wouldn't recommend it.

This is a spoiler-free review! :) This series is adorable! I am one to fall for cute animation styles, and this did the trick! While there isn't much of a story going along at this point in the series (4 eps) the main character Maika is making friends and having a good (?) time at her job at the Cafe! I would not consider this an every-day-life anime, however you do follow her adventures at the Cafe being a 'SUPER SADIST' (or trying to be, at least.)  The Animation of this series is pretty average, I have nothing to complain about. (Not as good as Kimi No Nawa, or as bad as Tsukihime animation wise) Soundwise, there's nothing to see here... move along.. As I said previously, the characters are all totally different, (MC x Manager 4 life) and all have complementing personalities that are interesting to watch. As a small note, there is some down low references to sexual humour, but no fanservice. Overall, a very fluffy, light-hearted anime.

Now I didn't really write a review for this anime, but I did make a video review of Blend S, saying essentially what I think about the anime, and the reason I gave it this grade. Blend S Review: Click Here for the Video! 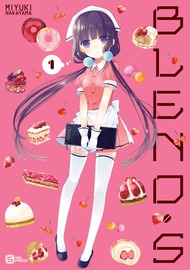