Bleach Movie 1: Memories of Nobody - Reviews 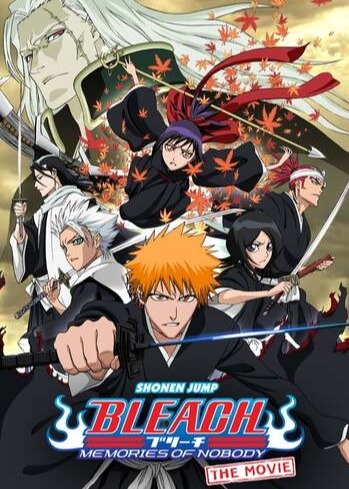 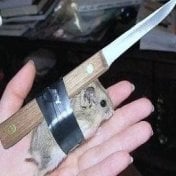 "Back in the real world, Ichigo and the gang have returned to eliminating normal hollows, but new dangers await them. After being attacked by strange white spirits known as "blanks", Ichigo and friends are saved by the female shinigami Senna – but she's no ordinary shinigami. For Senna cannot remember her squad number, yet retains memories of the past; and she is sought after by Ganryu, the leader of a group known as "Dark Ones", who was exiled from Soul Society. Ganryu is trying to attain an item known as the "Memory Rosary" in order to take his revenge on those who struck him down, and he needs Senna to do it. Who is Senna, and how does she fit into Ganryu’s nefarious plans?"

Bleach: Memories of Nobody is the first of three movies residing in the Bleach universe. If you are a Bleach fan, you'll be mildly entertained. If you are not a Bleach fan or have no idea what Bleach is, don't even bother with this anime.

To say the least, I was not exactly pleased with Bleach: Memories of Nobody's story. The biggest problem being that it falls into the trap that tends to plague all movies based on a series. That is, they managed to just copy and pasted 4 regular episodes together to make a movie. While this isn't exactly bad, Bleach must be doing something right considering it is still running after 250 episodes, it doesn't really have the polish that I would expect from the increase budget of a movie. It’s the safe way to do a movie, but also the least inspiring.

Another problem with the story is that it gives you almost no Bleach background information. I understand that when you make a movie based on a show, it is common to expect the viewer to have some experience with the series. However, they typically give the viewers enough background information that they can at least follow the movie. I promise you right now that if you have never seen Bleach before, you will have no idea what the hell is going on, and thus, you will be asking yourself "What is this XXXX?"

On the plus side, the pacing of Bleach: Memories of Nobody is respectable, and the ending managed to get a little emotion out of me. By little, I mean very little. Also, as stated above, 4 Bleach episodes slapped together doesn't make for an awful story, its just nothing to write home about. The amount and length of the fight scenes were completely rediculas and entertaining just like the series.

Frankly, I thought the animation of the movie looked exactly the same as any other episode of the Bleach franchise. Characters are unique and well drawn, and the backgrounds are slightly above average. Like the series, the fight scenes are especially well done. So why a 6? Its because it has the same damn animation quality of any other Bleach episode. I expect a noticable increase in quality in animation for a movie, and it just wasn't happening.

Like the lack of polish in animation, if you have heard the sound from one Bleach episode, you've heard all the sound you'll get from this movie. Intro and ending songs are nothing special. Like I stated before, I expect more from a movie, and as such, I judge the sound of the movie much harder than if it were just from the series.

You have all the returning characters... with no good explanation on who anyone is. God help you if you haven't seen a Bleach episode before. However, I have always liked the Bleach characters, and felt that this movie showed at least some growth, especially in Ichigo.

The bad guys were forgettable, but newcomer Senna impressed me. She manages to pull off the cute, but not annoying, female character. I found her fresh, and she was really the only thing that reminded me that this is a movie and not just another episode of Bleach.

The biggest problem is the lack of polish I would expect from a movie based on a series. However, if you like and watch the Bleach series go ahead and enjoy this mediocre movie. It takes the safe route, and sticks to the tried and true method that has entertained fans for years. While there is nothing special to be found, you'll definitely find it at least mildly engaging. If you have never seen a Bleach episode, stay far away from this one.

This is the first Bleach movie and I must say it ended up being better than I expected. As far as movies go, you can of course expect far better production values and flashier battles. Yet it has something more than just an excuse for a parade of special attacks. It is by all means nothing more than a filler mission but it had a metaphysical aspect that went beyond the simple plot of “Let’s save Soul Society for the millionth time”.

First of all, if you haven’t watched any episodes, stay away from the movie. You won’t understand the new twist to the cosmology of the setting without prior knowledge of the general story and cast. Plus, the action may mislead you, as it hardly gets so good in the series.

Second, if you do know of the series and go for this movie, chances are you watch Bleach just for the battles as neither the story nor the characters are deeper than a rain pond. Still, the main idea behind the Blanks and the Memory Rosary are very good as an extra aspect of the otherwise simplified and polarized good souls – bad souls and it would be quite catchy if they had it inserted in the main story from the beginning. It would leave room for side stories in the Valley of Screams and excuse a lot better those out of place fillers. Too bad they didn’t.

Animation and sound wise, the movie is very good. It uses cinematics, greater than those in the initial episodes (how do I miss those) and makes the story to look dramatic, like a good samurai movie. The level of lining detail is more or less the same, though there is a higher plethora of colors and a much lower amount of static images and repeating frames. I must say that as far as atmosphere in a title like Bleach goes, the movie did a wonderful job.

Of course, most will not care about this as much as the action part. Yes, there is action and it generally good. If you are into superpower battles, you will not be disappointed. Still, don’t expect any realism or decent choreography, as the whole deal was, and still is, just people yelling the names of their attacks and then their swords magically change shapes and spit all sorts of elemental spells. Thunders and lightings fill the screen and buildings crumble and dimensions merge. Still, the showdown was very disappointing as the villains in the story weren’t much of a threat in close combat and only their run-of-the-mill “Let’s destroy Soul Society from afar” plan was their only slight change of winning.

What else… Ah, yes; voice acting. Can’t say it was any better than in the series. It is still mostly one-liners and yelling of the names of transforming swords and spells. The dramatic tension is almost lost because of all that. Thank goodness there were some semi-psychological dialogues around existentialism issues that saved the movie from complete boredom. I never say no to some intellectual flavoring to a fighting shounen.

The characters are, as expected, more shallow and uninteresting than in the series. Not by too much though, as all of us who know of Bleach are aware that there was never much meat around those bones to begin with. It is a filler movie and you get nothing extra, other than seeing all the captains attack and do a cameo parade of special attacks before Ichigo storms in and saves the day in the same fashion as always. The movie villains were all talk and no personality. Unless you consider a “kill everyone as revenge” attitude as personality. Senna on the other hand was quite an interesting character, both as a girl fooling around the serious Ichigo but also as a character with issues around the meaning of life and being. I actually sympathized with her more than almost anyone else in the whole series.

The story has a simple and expected plot. Soul Society is in danger; Ichigo to the rescue, everyone fights the minions and lets the lead take on the boss. But the main idea behind the otherwise simple plot was very interesting. Imagine being given a bunch of memories, not of your own. Are you a different person than before because of them? Are your thoughts the thing that defines your soul? Great food for the mind although it is not really looked upon and you’d probably care more about the battles than this issue. Still, the story overall is quite weak as you hardly believe these Nobodies (literally speaking) were actually a real threat for the captains of Soul Society, with their imba cannon and their imba bankais and the imba lead on their side. By the way, everybody was just trying to deal with the villains that were created by the very misdoings of their leaders and no one seemed to think how getting rid of their scheming leaders would stop bringing their world to the brink of destruction every 2 months. Not to forget to mention that once again Ichigo was fighting to save a chick and not to save the world. Somebody needs to explain to him one day that a random chick he has no real interest about is less important than the rest of the world.

Value and enjoyment ain’t much. I have dropped the series and deleted all the movies months ago. I lost interest in shounen that are nothing more than brainless action and lame attempts at drama. There are far more interesting shounen, as there are far more dramatic and realistic samurai movies. So, aside from the fanboys of the series, this movie is more or less a quick watch without guaranteed satisfaction.

So, at best you can enjoy another half-baked movie about yet another series that went down the drain after a while. I for once liked it more than the second Bleach movie.

Plot was a basic big bad/group abducts someone to get what they want and to hurt who they want. Of course this is Bleach so it has its twists. Not saying it was a bad plot, but it was ok.

Animation was well done, nothing really new. Fight scenes were great as usual.

Sound was good, was not fond of the first battle scene music with the hollow. I just don't think it fit with the movie/series. Ending theme was pretty good as well as the rest of the in movie music.

Characters in this one were pretty good. In addition to the original series cast we get introduced to a new character as well as a new group. In combination with the new characters though I saw no need to cram in more of the original cast who didn't do anything at all through the movie.

Overall it was a good movie to watch for Bleach fans and further develops the Ichigo character. Recommend this a watch for the fans.