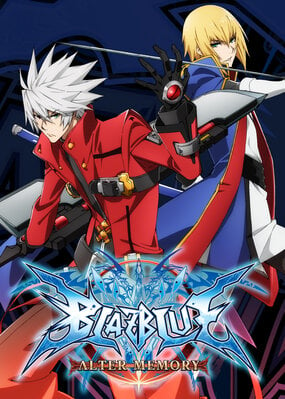 The basic instruction that I can give anyone who watched this anime is, "Play the games. This is an anime for the games. If you watch this anime without playing the games and liking the story, you're screwed." BlazBlue: Alter Memory is as compressed as can be expected for a series spanning 2 3/4 worth of games' stories (Looking at you, Capcom style additions like "Extend" and "II"). It cut the entire first game of BlazBlue: Calamity Trigger down to about 2 1/2 episodes, which neatly summarized Ragna's "True Ending" in that game. The last 9-10 episodes retells Continuum Shift largely from the perspective of Ragna the Bloodedge, Noel Vermillion, and Jin Kisaragi, making a couple stops now and then to show you: -What government rebels Kokonoe, Makoto, and Tager have to say about what the main characters are up to, -What Rachel Alucard thinks of the bullshit caused by Hazama and the government, and -Big Bad Hazama appearing to demonstrate that he is the worst person ever, and nailing it into your head that he will corrupt Noel's friend Tsubaki Yayoi just for fun. Now, you may be thinking, "Why didn't they expand upon a lot of the characters? Why wasn't there more screen time for [Character X]? Why didn't they explain more of what was going on with the world? WHAT THE HELL IS A BLAZBLUE AND A MURAKUMO UNIT?!" I can give you the answer to that: play the games. This story is COMPLETELY INACCESSIBLE WITHOUT PLAYING THE GAMES. Say what you will of adaptations of videogames, but arguably, this story isn't so much an advertising ploy to get people to play the games, NOR is it, in my opinion, a good way to introduce someone to the games. The whole plot essentially exists to be: 1. A FANSERVICE, SOMETHING TO APPEASE PEOPLE WHO ARE ALREADY FANS OF THE GAMES, OF WHICH I AM ASSUREDLY A PART OF. The scenes showing Ragna's relationship with Noel, Rachel, Taokaka, and Lambda are largely for this purpose: further, the curtness of the fight scenes is arguably there because THEY HAVE 12 EPISODES TO GET THROUGH THE PLOT AND IF THE PLAYERS OF THE GAMES WANTED TO SEE FIGHTS, THEY WOULD PLAY THE GAME. The money of the show is the fun dialogue between the characters whom the player is already familiar with. (The pinnacle of the above point is the fight between Ragna the Bloodedge and Carl Clover, infamous for being the worst character in the game: the fight lasts for under two minutes and Carl is knocked unconscious by a piece of metal falling on his head, never appearing again in the show). The only other conclusion that the plot seems to imply is that: 2. THEY REALLY WANT YOU TO PLAY THE UPCOMING GAME CHRONO PHANTASMA TO SEE WHERE THE STORY IS GOING AND GET AN EXPLANATION OF WHAT THE HELL YOU JUST WATCHED. If that is the case, then BlazBlue: Alter Memory is a cashcow, nothing more, nothing less. However, the director of the games has stated before that he had always intended to make BlazBlue an anime-- quite frankly, for fans of the games, this anime was the realization of that want, that dream. BlazBlue: Alter Memory is what a BlazBlue fan invested in the main few characters (at least, speaking from my own perspective) could want from an anime. All of the music from the games is re-composed, the scenes in the game are nicely reconstructed, nods are made to certain story paths, and overall, it is a loveletter to those who sat through every route of the game to get the True Ending, in both games. OVERALL: IF YOU HAVEN'T PLAYED THE GAMES AND YOU'VE WATCHED THIS ANIME, I AM SO SORRY. YOU PROBABLY DIDN'T UNDERSTAND A SINGLE THING THAT WAS GOING ON. BLAZBLUE HAS ADDITIONAL PARTS OF THE GAMES LITERALLY DEDICATED TO EXPLAINING THE LORE OF THE WORLD, AND WITHOUT THOSE BITS, THE WHOLE SHOW WAS LIKELY NONSENSICAL AND RANDOM. To watch BlazBlue without playing the games is to watch one of the Harry Potter movies towards the end of their run: you have no context, and thus you'll likely have no fun. However, IF YOU LIKE BLAZBLUE'S STORY AND CHARACTERS, THIS ANIME IS BEAUTIFUL AND IT WILL MAKE YOU HAPPY. To those who criticize the story for being random and incomprehensible, YOU NEED A LOT OF CONTEXT FOR THIS STORY. To help amend this, THERE WAS A WEBSITE THAT LISTED ALL THE INFORMATION ABOUT THE LORE TO ASSIST YOU. However, it was in Japanese and likely didn't explain enough. Furthermore, COMPRESSING SUCH A COMPLICATED PLOT INTO SUCH A SHORT AMOUNT OF TIME LEFT NO TIME TO EXPLAIN TO THOSE WHO DIDN'T ALREADY UNDERSTAND.  IF WE WERE GIVEN A LONGER ADAPTATION, WE COULD'VE HAD FLASHBACK EPISODES TO EXPLAIN WHY EVERYONE WAS SO ANGRY ALL THE TIME, BUT UNFORTUNATELY, THAT WAS NOT THE CASE, AND THUS, THIS ANIME IS REALLY JUST FOR PEOPLE WHO ALREADY LIKE AND UNDERSTAND THE GAMES. Final Score for Non-fans: 6.5/10, You'll be confused. Final Score for Fans: 9/10, It's a dream come true.

Allright. It's been a while since I've done something like this so bear with me as I try to find my way again.I did quite a lot of them in the past on a different website which you can find here: http://legendsofsatura.net/index.php/forum125/6-reviewing-guild.html ....They probably aren't very good though but please do stop by if you have the time and inclination. Originally the site was for writers, mostly original but also fanfiction. Also I'm Dutch so there will be spelling errors. If you find them annoying give me a shout and I'll try to fix them. Oh, I will try to keep spoilers to a minimum but there will be some. Usually the worse I rate an anime the more spoilers this will contain. You have been warned So, you have probably already read what the animation is about in the discription given by Anime-Planet, which is the same as on the box. I will therefore try not go into the story that much unless I'm ranting about something (spoilers). ART: One of the few good things that I can say is that the art is great. Characters are easily identifiable and the action is easy to follow. If any CGI was used, and it probably was, then I didn't notice it. SOUND: Like the art it is pretty darn good. You never got lost in what was happening in screen and the sound effects only added to the fun. CHARACTERS: Main character is Ragna the Bloodmage who is wanted for trying to destroy the Novus Orbis Librarium. Little is known about why he does this as the NOL is instrument to guarding the world peace. One thing is clear is that he will stop at nothing to complete his personal mission. Jin is a high ranking member of NOL who goes apeshit after hearing about Ragna. Goes AWOL in an effort to kill Ragna. Noel is an officer of NOL and is tasked with bringing Jin back to NOL. She ends up traveling with Ragna instead. Rachel is mysterious young girl who wields incredible power and, for reasons unknown, helps Ragna from time to time. Yuki Terumi is a mysterious character who seems to have deeply infiltrated into NOL. Although known there as 'Hazema', Ragna, knows him as Teruki and he is very high on his kill list. STORY: Uh oh. An anime adaptation of a popular game....This can't end well and it doesn't. The main problem with these sort of anime is that it is essentially for the fans of the game only and let me explain why: I HAVE NO CLUE WHO ANY OF THE CHARACTERS ARE! Seriously. Characters just appear out of thin air, do something and then fuck off into oblivion. It is clear that they paid a role in the games where you got to know them and and stories, here they just appear and you have to figure out where they stand. Kokonoe is a prime example of this problem. She plays a prominent role in the anime and is featured, briefly, in many of the episodes. There is no backstory given about her and her partners and every time she appears you are left to wonder who and what she is in the series. And dispite her short appearences she has some major influence on the story arc. The character problem is something that plagues pretty much all game adaptations. It is not that the story it itself is bad but the studio tries to cram as many characters from the game into the anime. Street Fighter did a similar thing and it resulted in totally pointless scenes that were only created to show a character that played no role what so ever in the overall plot. In fact these scenes often completely took the pace out of the anime and slowed everything down to a crawl. I would have much more preferred it if the scene was used to actually explain some background on either the world or a main character. One such useless scene is when Jin is walking around a town and is suddenly attacked by some guy you've never seen before for something that Jin did while he was a NOL officer. There was no reason for that scene to be there other than give strange new guy some air time simply because he was in the game and therefore had to be in the anime too. Funny thing was that Jin was hurt at the time so dude calls out to him and gives his reason for wanting him dead before attacking. Guy notices that Jin is already badly hurt and in no condition to fight so breaks off his attack and takes him back to his place to nurse him back to health so that he can fight and kill Jin when he's healed. Wha...? You are trying to kill this dude right? Why the fuck would you care if he was hurt or not? Healed up he would probably kick your butt into next week. Yes it is stupid and yes they part as more or less friends. If you are a fan of the Blazblue series and have played its games than by all means enjoy this lovely looking anime. For me I wished they picked just one character and fleshed that one out in a full length anime series. Whatever my misgivings about anime like these I often find that the side characters are more than worthy of their own stories and I would like to someone create it one day. 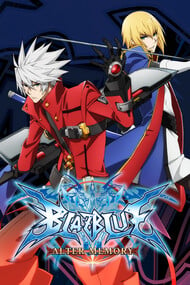 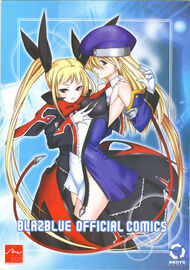 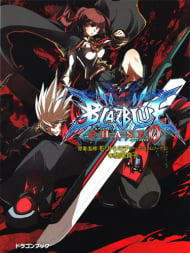 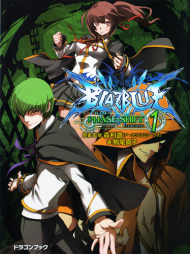 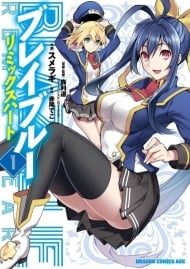 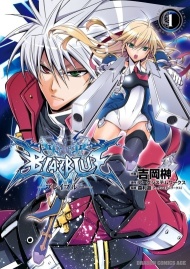 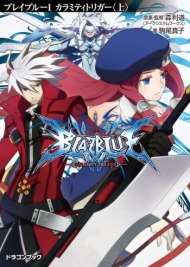 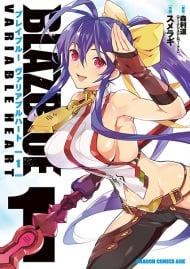