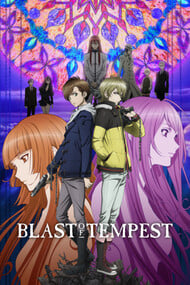 Hakaze, princess of the Kusaribe mage clan, has been betrayed and marooned on an island by her own people. They seek to revive the Tree of Exodus, an incomprehensibly powerful entity of alien origin, to save the world from the tyranny of its antithesis: the Tree of Genesis that powers their magic. Hakaze, however, believes their efforts put humanity in jeopardy; and with her power limited, she can only reach out to the world to beg for aid. Her call reaches Mahiro Fuwa, a young man grieving the mysterious death of his sister, Aika. He and his friend Yoshino agree to help - on the condition that Hakaze track down Aika's killer with her magic. The deal is made, and the battle that will determine civilization's fate is begun: but who will play the part of its villain, and who its savior?

[Spoiler Free/ Shorter Review] This series is for adults, not children or teenagers, as such it should be given the "seinen" label. It's difficult to place this in any particular genre, since it distorts and inverts many of them. Shounen action with magic powers? It inverts that, the MC doesn't even have particularly powerful abilities, the most powerful abilities are in the secondary characters. How does that work for a shounen genre? It doesn't work, you see how that doesn't work especially since the end is a fight against the Last Boss? The closest I can classify this would be visual novel, eroge, romance, and drama with some magic in it. Sprinked with some sci fi elements such as in Steins;Gate and Hamlet/Tempest plays. The first half, the 12 episodes, is a tightly plotted thriller and drama, with shounen themes. The conflict at the end isn't a boss fight, it's an actual debate, something most Westerners know nothing about since debate and rhetoric isn't useful for a bunch of serfs and slaves. Only educated people would know anything or be interested in such. A sign of a decadent civilization, the one we live in, not the one being eroded in the series. If you played RPGs and wanted to mind manipulate characters instead of killing them or fighting them, this is a good thing to try betting on finishing. The amount of talking and description of rules, is something I normally expect in visual novels, not anime series. Many conflicts are resolved through negotiation, something FBI negotiators and Gitmo interrogators know more about than your average clueless civilian or weakling serf. Thus while the show often has shounen action themes, it doesn't necessarily cater to that demographic. Too much talking in negotiation and interrogation, you see. As for why I call it an eroge, there is no particular 18+ content, it is just the setting is set up like that. The relationships between the 3 main characters are incredibly deep and mysterious, unraveled over time and there's some big shockers even at the end of the 24 ep series. The romance is a major part of several sub arcs. All in all, it encompasses about 6-10 episodes in total. It fits well with the plot though, but is jarring when the first arc of fighting finishes, so this is why I don't consider it for teenagers, shounen demographics, or anything of the sort. For adults that have experienced a wider breadth of experiences and life challenges, this makes sense to a point. To children, it doesn't make sense, at all. Btw, in the US, sometimes you are still a child 25 or 30, because of circumstances. So don't take that label as anything definitive. The drama is mostly in how tightly plotted the thriller ride is in the first half, 12 episodes. Later on the tone changes greatly, given the division between first half and second half of the series. Generally speaking, the second half was more interesting on the emotions, but the first half was more fun from a thriller pov. The ending was satifactory. It gave that nice nostalgic feeling after putting in long hours on a visual novel or light novel, even though I didn't do any work. I especially liked the female characters in this series. Gyaku moe characters, in the sense that their physical appearances don't actually consist of their internal selves. The character build up is a hybridization, so it can be pretty confusing. It turned out well in the end.

Blast of Tempest was a show that left me wanting more. While it did conclude properly, I often feel that with most other anime I've watched, there should be at least an episode dedicated to the relationships built at the end of a series. Besides that Blast of Tempest had a compelling storyline. A fine mix of drama, romance and the supernatural, it appeals to a very wide audience. I felt drawn to the main character Yoshino and his story, the loss of his girlfriend and the need to hide it from her brother (aka his best friend). The loss of his girlfriend was indeed depressing, especially since they seemed to have such a wonderful, fun relationship. I was less impressed with Mahiro, who throughout the series is dealing with coming to terms with his step-sister's death and his feelings toward her. It's not as if he is unlikeable, I think it was more a question of personal taste than anything else. Hakaze was another interesting character and without spoiling anything, the development of her ties to Yoshino and Mahiro are interesting to watch unfold. Blast of Tempest is an amazing show that I'm glad to have watched. While I did come away with mixed feelings, this show is both immersive, dramatic and compelling. I can guarantee you'll be happy with the way everything turns out, but it's worth giving it a shot. The journey is far more important than the destination.