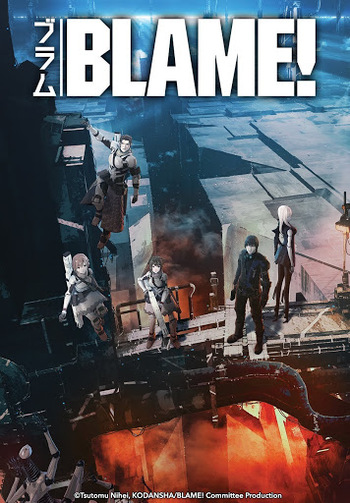 With the backing of a major multimedia company (Netflix) Blame! has been boosted forward into the spotlight. As many know, Blame! is an older manga series that was adapted into this movie. With that, unfortunately, we cannot see the true depth of the story and characters. All this movie needed was an hour and a half to bring in and capture your attention,
and it certainly did such.

Like most of the Anime movies, you don't have much to go on when you first start. However, it doesn't take long to grasp the dystopian
world that the characters live in. Scratching only the surface of the manga, this anime still serves a great adaptation getting the essential parts of the plot and leaves the viewers wanting more.

The animation is heavily set in 3D which may put some people off, I thought some parts were fairly noticeable but the overall scenery surrounding made up for it. This could be related to the Knights of Sidonia style of animation. After a few minutes, you should get used to it and focus more on the story. Though some might view 3D rendering as a disadvantage, I think here, it serves this action/adventure style really well and I look forward to seeing many more uses in future films.

Overall, with the time allotted, Blame! is a great choice for both new and veteran followers to the series. An easy story to get into but enough action to keep you pulled into the story. Character time might be limited but there is only so much they can do in an hour and a half. 8/10

Blame bears some resemblance in look and style Blade Runner, I-Robot, and even the Matrix but it's story is similar in some ways to the Terminator series.  Some of the main characters that fight as allies with humans do not appear to be human themselves.  Kiri has robotic eyes with a HUD and he apparently feels no pain or discomfort from severe injuries which he can somehow heal from or repair himself afterwards.  It is unclear just how human he is or if he is some kind of superhuman,l cyborg, or even a full android himself.  Even though he declares himself human and is not affected by devices intended to weed out the hostile AI from approaching humans.  Cibo is much the same way but looks even more mechanical.  How she got that way or if she was ever human to begin with is unclear.  Since the movie leaves so many unanswered questions and has a somewhat murky ending that will make some viewers a bit angry with no sense of a full ending, this affects the rating score.  Like many anime series and movies, the viewer is thrown in to a world without a sense of full disclosure or to be more precise, as if you are put into the middle of a story so fast it makes your head spin and are not given a full setting to understand the story.  Often stories like this throw you into several chapters into the story as if you already read a fair amount of it before watching the movie. It works more negatively than other stories because you will probably feel a bit unsatisified by the end due to lack of information and answers submitted from the get go.

We know and learn little about how the humans of that society got there or how they survived.  The concept is more muddled by Cibo's quest to get a type of anti AI cloaking device which is implied the humans either already possess or are protected by.  This is further made confusing by the destruction of a power source and the wasted effort of Cibo to install another device.  Other missing revelations come from the fates of at least 3 major characters.  If compared to the mangas and original source material, many of the main characters in the movie are not even mentioned.  The ending is made a bit murky by the revelation of the narrator which, we as viewers are not even aware of existing until nearly the end.  It is further infuriatiing, that the narrator who somehow takes over the story fails to reveal the fates of several other major characters.  What happens to the major character Tae is quite perplexing.  Something is shown happening to her but the sequence offers few clues what exactly that is and nothing further is ever divulged.  So in essense, aside from a handful of major characters and sadly, mostly those that die before or by about half way through the movie are the only characters whose fates are disclosed to the viewers.  In all fairness, most of the main characters, we have little to no clues what happens to them by the end.  The movie looks good artistically and graphically sharing similar visual style to the Sydonia series that Netflix also produced.  It is a brilliant blend of CGI style art with a sense of realism and traditional style anime characters.  The landscapes look like more mainstream style work but the characters are a near perfect blend of CGI, realism and the cutesy type looks most anime characters possess.  Sounds are loud, clear, well timed and voice work more or less matches the characters.  The only complaints are maybe how a few of the major characters always sound frustrated at the world or perpetually pissed off.   It lowers their depth as characters showing a narrow range of behavior and emotion.

The story is quite refreshing except that it lacks resolution to the destinies of most the major characters and a detailed enough setting or at least a detailed enough grasp that is not even revealed enough later on.  What we do see of the characters are pretty likeable even if they are missing a few details like their fates, pasts, or personal motivations and information.  The characters are displayed for the most part as communal with out much of a sense of personal individuality.  It gives the feeling of being manufactured as a story and perhaps even rushed to some extent.  We almost need another story or OVA follow up to understand this movie adequately.

Blame! offers one of the best and most intriguing settings in sci-fi, the concept of a Megastructure, that is, a structure so large that "At one point even the Moon, which used to be up in the sky above, was integrated into The City's structure". It has been suggested by author Tsutomu Nihei himself in his artbook Blame! and So On that, the scale of The City is beyond that of a Dyson sphere (a hypothetical megastructure that completely encompasses a star and captures a large percentage of its power output.), reaching at least Jupiter's planetary orbit (for a radius of around 5.2 AU, or 778,547,200 km); this is also suggested in scenarios such as Blame! vol. 9, where Killy finds himself having to travel through a room roughly the size of Jupiter (roughly 143,000 km)." -Wikipedia

The structure started on Earth and was created by humans that at some point lose control of the city, who had kept expanding at an uncontrollable rate for an unspecified amount of time, creating a massive labyrinth and since then, treating humans as vermin to exterminate. The main protagonist is looking to regain control of the city, while humans doing their best to survive this hostile environment, not knowing if there are others out there.

For me, this is the first and only time I had ever heard of a concept such as this in any media. I've been wanting to see this story in anime form for quite a while. This movie's story is not an adaptation of the manga, but rather a new original story created by the author himself, and it serves really well as an introduction to this world. The upcoming movie is supposed to start adapting the manga story, but we'll have to wait for its release to confirm that.

This concept is not explained in the movie, but it helps to know it in order to appreciate what you are seeing.

The animation has incredible visuals, Polygon Pictures really has excellent 3d technology and they know how to leverage what 3d does best, like photorealistic backgrounds, camera movements in a 3d environment, interesting textures, shadows, and lights. Add to that a good choice of artistic composition to every frame and interesting color palettes. This movie's visuals are the best 3d has to offer!

The audio is of exceptional quality as well, from sound effects to interesting music that helps to set the mood for each scene without being overwhelming or distracting. The dub is excellent! And I highly recommend it so you can focus on the visuals (unless you speak Japanese of course).

The story has no comic relief, instead, every character is serious about doing their best to survive, bringing a sense of reality and we still see some character development, despite the short timeframe the story takes place.

Overall, I would recommend this to anyone who likes sci-fi, action, serious plots, mysteries, and hypothetical theories about the universe we live in. 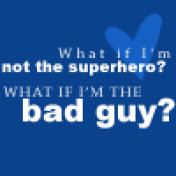 This movie has a very similar feel to the Matrix and Terminator. Typical style for apocalyptic "Earth" where machines go somewhat rogue and humanity is considered an insect; in this animes case as illegal residents. Story opens up with a little back-story into the entire animes history; though it seems to follow more closely to a single "Village" of humans and their run in with the main protagonist, Kirri. Without spoiling the anime, it follows the typical "human extermination" anime trope where humanity is being wiped out with machines taking dominance due to a reason that is very vaguely described and, as pointed out by another charter with a time stamp of how long they were "waiting", several hundreds of years. The ending of the movie left much to be desired, raising many, many more questions than are answered and leaving it up to the viewers to interpret what happened/will happen.

Most likely, this is an attempt to either reinstitute the series, or try to draw new fans into the series; being as the Manga covers much more than any of the animated incarnations of this series. This movie did just that and piqued my interest to at least give the Manga and look and see what the actual history/plot points are for this series.

The animation is relatively good and reminded me a lot of Knights of Sidonia in a sense, and a bit of the animated version of The Matrix at some points. Sound wise there were a lot of good effects that had a good oomph to them, but there were a few times where the sounds seemed a little off or overly played up. The character design for both the humans and machines are very good and detailed. The machines have a "hunter" feel to them, and with the name Exterminators give you a sense of dread when they show on screen. The only failing point is character evolution and detail in their own sense; however, being a little over an hour, there isn't much time to develop or properly introduce the characters. What is able to be done, is however done well.

Would I recommend this to someone? Yes and no. If you're into the trope of machines killing off/exterminating humanity, then this is at least watching the 2017 movie and seeing how you react. This movie is very interesting and played a slightly different angle to the "Humans made machines, now they're killing us" anime trope. Honestly am excited to read a few chapters of the Manga and see how BLAME really is.