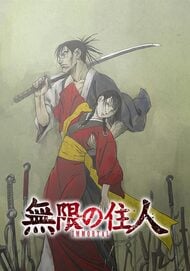 Manji, the Slayer of Hundreds, has been cursed with eternal life — but in the dark of his existence shines a final glimmer of hope. If he can slay 1,000 evil men, Manji will finally be able to end his life of infinite misery. When a young girl named Rin asks him to help her take revenge on the group of master swordsmen who slaughtered her family, Manji finds some resemblance to his lost younger sister in her and decides to come to her aid.

This anime is really good if not a bit Japanese. It mulls over ideas at a leisurely pace, often to a non satisfying but realistic conclusion. The show is often very understated too. I would say it is a combo of mushishi, samurai champloo, and samurai jack. The animation is really good and the fights are very satisfying. The characters are all generally well fleshed out. The characters also all have clear motivations, and are well written which makes them interesting. The story gets very dark though so watch out for that. There is an extended torture plotline without a satisfying conclusion. The show starts out slow but if you stick with it I think you will enjoy it all.

At the moment of this writing, this anime is seriously underappreciated on the rankings of this site! Probably didn't reach the right audience due to the level of violence, realistic approach & vulgar language; and yes, if you are squeamish about that then this anime is not for you. Nevertheless, this is a masterpiece! Despite the supernatural elements, this anime feels extremely realistic, although I'm not sure how much historically accurate it is? It really feels like a window to an era of the past when the law barely protected the people and justice needed to be carried out by your own hand. The characters are simple and easy to understand and/or identify with, and although you may not always agree with their way of thinking, it feels quite believable that people of that time lived their lives the way is presented here. There is also a great level of character development and not only for the main characters; their reasons for being the way they are, are explored thoroughly within the story, letting you see their point of view. This story doesn't romanticize the Samurai way of life the way most shows do, in this sense is closer to Shigurui: Death Frenzy, where the futility of a life full of violence is explored among other themes. The story starts as a simple tale of revenge, but it evolves into much more, exploring many themes through the eyes of different characters. The life and point of view of the antagonists are explored too. All characters receive development and this is one of the very few animes that actually has an ending! Although my only complaint is that they seem to have run out of budget & time for the ending episode, as the fights are cut in a way that doesn't let you see what exactly happened, and they underperformed in comparison with the fights that we have seen before, such a shame for the final battles! But at the same time, by this point, the fights are not the most important part of the story and are mostly meant to show the futility of war. The animation is on another level, the style is superb and quite beautiful despite all the carnage it showcases! Just watch the first episode and you'll know what I mean. The music is excellent throughout the show, both background music as well intros/outros. All aspects of the show are top-notch, including voice actors for both Subs & Dubs, that really bring these characters to life. Overall, I would say this is a must-watch for any mature audience. If violence is not your thing this is probably not for you, however, just because you avert your eyes to violence it doesn't mean that it will disappear from the world, which is in many ways what this anime is about. 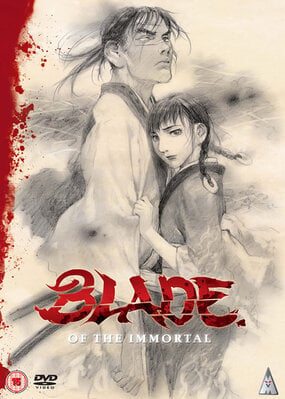 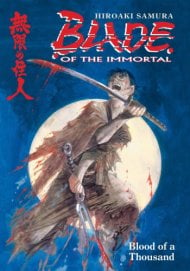