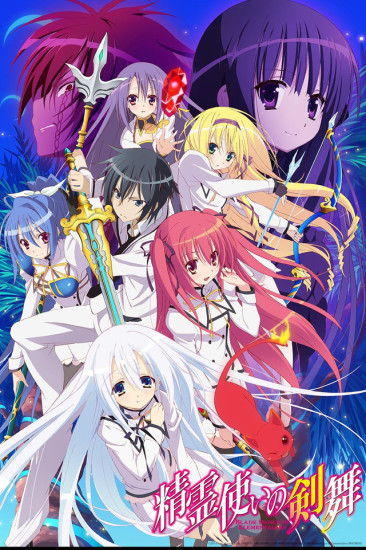 If you're looking for anime similar to Blade Dance of the Elementalers Specials, you might like these titles.

Negi has just discovered that his father is still alive; thus, he decides to travel to Wales and find him, and prepares to say goodbye to his students. When some of his class learn that Negi may not return to the Mahora Academy they form the Ala Alba – a club with the purpose of finding Negi’s father and returning to school safely. Following their grueling training the Ala Alba – under the guise of the British Culture Research Club – is ready to depart for Mundus Magicus. However, before they can leave the Ala Alba has to contend with other classmates who want in on the action, as well as Negi’s jealous childhood friend, Anya. At this rate, will Negi and the Ala Alba manage to make it to Wales?

Saekano: How to Raise a Boring Girlfriend: Fan Service of Love and Youth

After six months of hard work, the high school doujin circle Blessing Software has almost completed its first game; but to finish, they need to take a few picturesque background photos. So the gang makes their way to a hot springs inn by the scenic mountain forest, where they can lose themselves between the trees and take advantage of the sultry open-air bath. Tomoya, founding member and the club's only male, is focused on the task at hand; but to get through this trip in one piece, he'll have to survive the advances of the playful Michiru, obsessive Utaha, aloof Megumi, and his childhood friend Eriri!