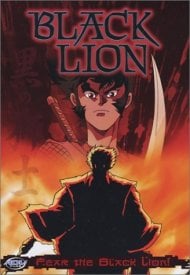 In the year 1580, Nobunaga Oda is on a warpath to obtain rulership of Japan at any cost, and ninja and samurai alike are banding together to try to put a stop to his tirade. But when the invincible warrior Ginnai Doma – also known as the Ninja Killer – enters the picture, more than just a little blood will be shed. It's up to Shishimaru of the Iga Ninja and other powerful fighters to take down Ginnai once and for all, but little do they know that aliens, cyborgs, and even strange technology are somehow involved!

StoryNOTE: though I was careful to avoid spoilers in the synopsis and screenshots, this anime is just too hilarious to not put specifics into the review.  I don't necessarily think the things I'll discuss are spoilers compared to what every other site says about the anime (not to mention you find these things out in the first 10 minutes), but be forewarned if you are particularly sensitive. Picture, if you will, a morose scene set in 1580 where an invincible and powerful warrior lunges at limber ninja and samurai, striking them down when they stand. In a desperate attempt to bring him down, one lone ninja puts the warrior into a headlock to prevent him from pursuing and killing his comrades. However, what he didn't anticipate was the warrior... EJECTING HIS CYBERNETIC HEAD AND FLYING THROUGH THE AIR, LAUGHING AND SHOOTING AT PEOPLE WITH LASERS!!!!Seriously folks. CAN IT BE ANY MORE AWESOME?!Black Lion, like Crystal Triangle, has the most absurd and confusing story ever. It starts out reasonably normal: in the year 1580, samurai and ninja are fighting against Nobunaga Oda, but a new "Ninja Killer" has emerged who seems to be unstoppable. The only caveat is, the killer is... a cyborg! And he's been changed by seemingly otherworldly aliens who are orbiting the planet in a ship. Oh, and let's not forget the random bits of technology strewn about Japan, which only certain people know about. Black Lion also has immense amounts of terrible dialogue, but the real kicker is that nothing is ever explained, and the ending is open and useless! Truly, Black Lion is one of the worst things ever. Without all of the fantastical elements, Black Lion would be a boring and generic slasher flick; but with the elements, Black Lion is a Mystery Science Theater 3000-style comedy that everyone should see. Don't get me wrong - the good stuff doesn't kick in until the 45-minute OVA is almost complete, but trust me, the flying head scene makes it all worth it. AnimationAnimation is not the strong point of Black Lion - but then again, you wouldn't be watching it for the animation. Character designs are generic and bland, action scenes seem slightly awkward and shaky, and colors are generally muted (which doesn't help the gore look very shocking or horrific). The true gems of the animation lie with the cyborg depictions of Ginnai in all of his Terminator-ripoff glory (and of course, the flying head and laser sequence). SoundMuch of Black Lion is devoid of any background music. Parts that do have an accompanying track tend to be forgettable, though. Typical synths are used, along with the occasional flute. CharactersThe ninja Shishimaru is easily the only memorable character of Black Lion - barely. He loses someone close to him at the hands of Ginnai, which sends him on a fury-filled path of revenge. Other characters include a rival ninja girl whose back story we see to some extent, and a whole cast of "red shirts" (for you Star Trek nerds out there) who have their heads crushed open or bodies torn apart by T-1000... I mean, Ginnai. With the exception of knowing about a few of the characters' pasts, none are developed to the point where we care about any of them. And then there's the characters who just make no sense at all! Like the "aliens", the man who has a freaking science lab in his 16th century hut, and Ginnai himself. It's like Go Nagai pulled out a Mad Libs tablet and filled in the blanks, "_____ and _____ in an _____ world". Of course! Aliens, cyborgs, ancient samurai! The flying head scene does make Ginnai the best character ever, though.OverallThe majority of Black Lion is unforgettable and terrible; after seeing 2/3rds of the OVA, I couldn't help but be disappointed that Black Lion was bad (and not bad enough to be funny). However, then the flying head sequence arrives and blows all expectations out of the water. Truly, I think that Black Lion is worth seeing for this scene alone, but the additional alien/spaceship/cyborg scenes make it hilariously awful as well. Don't watch Black Lion expecting anything good, and don't watch it expecting a typical Go Nagai piece (this is one of his least ecchi titles). Do watch Black Lion for how incredibly outrageous the story is, and expect to laugh it up. Big time.

note: I havent watched this in a while- so Im going off of what I remember-apologies if anything is wrong <3-----------------------------------Im sure you're probably thinking-"Ittermat you only gave it a two out of five in your actual rating...why is this review higher than that?"well I'll tell you-Its because the movie so batshit insane its fun to watch!Really- The storyline makes absolutely no sense...none... nothing is ever explained...nothing.Why are there Lasers and fully functional cyborgs in an era where they had no electricity? What caused this Crazy deformity of history?Yep...Aliens... Aliens helping out A crazed snotty wimp of a dude named Nobunaga. Why are they helping him? We dont know! Why do They do anything? We dont know!Did I mention he has a holographic computer hidden inside of a mountain? no... well he does.About the only thing we do know are the reasons for two of the main characters doing what they do.Ninja Killer Ginnai for example... Well he friggin KILLS ninjas! Wow! I never would have guessed that!Why does he kill Ninjas?come on guess... this is an easy one!No?because they Killed his familyWhy did they kill his family?....yeaa... uhm... that one I dont know. Or I just dont remember...It DOESNT MATTER ANYWAY.Lets move onto our other main character ShishimaruHes after Ginnaiwhy? because He killed his girlfriend.Why Did Ginnai kill Shishimaru's girlfriend?Because she was a ninja.whoa can you handle that explanation? because thats pretty much all you're getting.The rest of this movie is basically a bloodbath of different ways they can kill each other and can try to kill Ginnai (who wont die!)Im not kidding either... theres a part where they Slice his head in half...and he simply attaches it back on and it Solders itself back together...... without TOOLSHow the....What?thats it... Random nonsense is tossed in... Too much technology and the story is hard to follow.... theres also a part where Shishimaru tries to get Ginnai high on marijuana...(Im completely serious here.) It doesnt work...but seriously what is WRONG with you ninja boy?Did I mention that the ending is a complete nuclear explosion (thanks to Ginnais head)...but our main characters come out unscathed?Do I REALLY have to tell you how or why this happens?well okay fine...SPOILER ALERT------------------------So what do I think honestly? Its a bad show... but its so bad its kinda good. And I have to admit that when Im angry about something, there is nothing like simply watching Ginnai Kill ninjas and random people and just... everything. When I feel like I want to do that. I watch him do it for me. (the same reason I toss in Gungrave:Overdose when im angry- satisfying!)That and I will ALWAYS love Shishimaru yelling to his enemy ninja as he slams a door. "I do not like Koga ninja! Their women are too loud!"Classic.Just classic.So yea if you're looking for something terrible- watch this- its terrible- but you might find you enjoy it because of how bad it is.Maybe?who knows.~Ittermat

This is great classic from the early 90's. It has all the bells and whistles. The story is set 1580 with  Nobunaga Oda trying to unite Japan. Two ninja clans fighting, a psychotic killer, and creepy aliens all blend in together to make this an exciting romp into the past. This was basis for Basilisk. The hero of this story Shishimaru is rude and crude but he has the support of his clan "The Iga". Ginnai Doma, "the ninja killer" is on a rampage to exterminate all ninja. The Iga and the Kouga have to band together to defeat Ginnai. But this will be tough due to alien interference. This is an all out action anime! Sword fights, explosions, and secret ninja tricks. Who will win? Watch and find out! Animation and sound are great for the period. All ink and paint with classic sound effect. 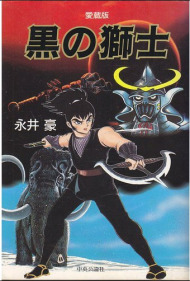