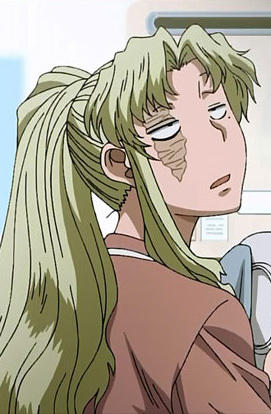 Since nobody has done a written review nor is there a show description (not that it needed one considering what this is...) I've decided to write a review of sorts

What story? it's a collection of random shorts where the characters act in even more exaggerated fashion than in the main show

The animation in all cases is much lower framerate than the main show, not that it matters much since it fits with the omakes better.

Sound is rather simplistic but gets the job done, considering that most of the time is just very funny, reminds me of kiddie anime that I used to watch

Oh my where do I begin on this... All the characters are either really high on drugs or they're just in an alternative universe, but either way they're acting like extreme versions of themselves while still have a rather deranged humor to it.

Watch this after you've finished both seasons, otherwise you won't understand much at all. This little omake is loaded with dark humor...

Watch at your own risk

And in a total swerve, these are VERY very funny. You do have to have seen the main anime to understand them tho.

The main cast, acting out some silly fanservice skits. Ugh...