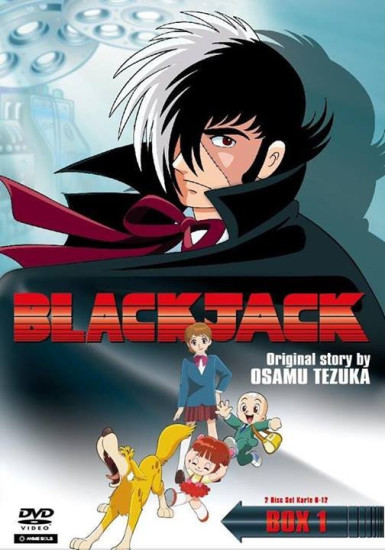 You have to ignore the biological blunders to enjoy this series. I do like the character idea & stories. I just have to turn off biology 101 or I will hurt my neck wincing.

A demon with a scalpel and his assistant strawberry will save your life when no one else can... for the low low price of ¥100,000,000.

STORY Black Jack survived being exploded as a kid only because of the amazing skills of Dr. Honma. In the present, he has become just as skilled as that late doctor. BJ always charges killer amounts, but even though he can seem heartless in that sense sometimes you see light shine through his cold façade. Anyone who's sick didn't have a choice to be that way, so who can blame them? Why BJ charges so much is never explicitly stated, so we are left to theorize here. Perhaps he keeps using it all to buy more private islands to save them from being developed...

Each episode has a short story of its own. I was surprised by how the themes hit home a bit too hard - from climate change and overpopulation, to not ignoring the elderly, this series points to things way beyond the operating room. The operations aren't graphic and go by quickly, since the true focus is on the story rather than his exact solutions. Showing his techniques might have just been too difficult anyway when he solves some made up diseases (ie: shrinking, or even a sick extraterrestrial?!).

ANIMATION You know me. I love older stuff like this!! Tezuka Productions' more cartoony style but always incorporates a lot of facial diversity. If you hate it I would watch Young Black Jack first, and then come to this after you've fallen in love with BJ's moody character. Watching that made me crave more of BJ and here I am. ...The cut scene they use for BJ transitioning into his scrubs is so flamboyant. It's perfect!! >0<

SOUND Intros actually slapped, but you can definitely tell it's the early 2000s.

CHARACTERS  Black Jack won't save you unless you agree to his outrageous fees. He does seek justice, but most just see him seeking money... "Even ¥100,000,000 is a small price to save a life." This gave him his ruthless, greedy reputation, not to mention he's unlicensed! But if you've tried everything else, he's your guy. His skills speak for themselves so he never brags that he's a perfect surgeon. His every fiber radiates coolness but also melancholy from his regretful past. He thinks rationally so don't mind him if he saves the cat before he saves you, since it was in worse condition.

Pinoco's backstory is hidden until episode 44 so I don't think I can tell you much about her beside that she can eat infinite parfaits. She looks 1 but is truely 18 years old, however as much as she says she's BJ's wife that is untrue. I find it funny though that not once did BJ say "we're not married." He just keeps on talking like she said nothing at all lol

OVERALL Each episode is unconnected so you can really pick and choose the best if you're not up for all 61. I however binged them all and couldn't find one I wished I'd have skipped! Each has exciting action and/or drama to offer, and thrills as they deal with life-death events. I think I learned more about humanity than about medicine, and that was what took this series to a higher level. Without learning about the lives behind the patients, there wouldn't be any meaning or long-lasting imprints from the anime. So, get a'watchin!

Yes, this anime has a few medical and biology mistakes, but overall it's amazing. I don't think it was meant to be 100% accurate in terms of biology. For example, in the manga there is a disease which causes organisms to shrink until they die. Obviously that disease doesn't exist. Pinoko was literally a teratoma who was saved by Black Jack and put into a human suit. Osamu Tezuka combined his experience as a doctor with his own style of story telling.

Plot 8/10: The plot revolves around Black Jack helping patients and sometimes Pinoko will tag a long. There are a few episodes that differ, but are still enjoyable. The patients have their own stories and lives that are shared with the audience, which I really liked. There are a lot of great themes as well like not underestimating the strength of the human body.

Characters 7/10: A lot of the patients are likeable, but they almost never reappear in the story with a few exceptions. However, Black Jack is a badass character and his backstory is well written. He still has his own conflicts and beliefs and they add to his character. A lot of people find Pinoko annoying but I think she has purpose to being with Black Jack. She keeps him stable and down to earth and I definitely think she had an impact on him. Pinoko is both comedic relief and a strong character in the series. I think they are some of Tezuka's best characters.

The only complaint I have with this anime is that it's toned down compared to the manga. The manga has a much more dark tone and this adaptation doesn't fully follow the source material. I'm new to writing reviews but I just wanted to review Black Jack and say that it is worth the watch.

It was a fun thing to watch, i enjoyed the plot and how many of the operations were demonstrated. I find this anime somewhat semi-realistic the way how the expresions were drawn on the characters mostly Jack Black during operations just shows how intense the operation is, which i thought was quite nice since most animes tend to posses that fiction notion.