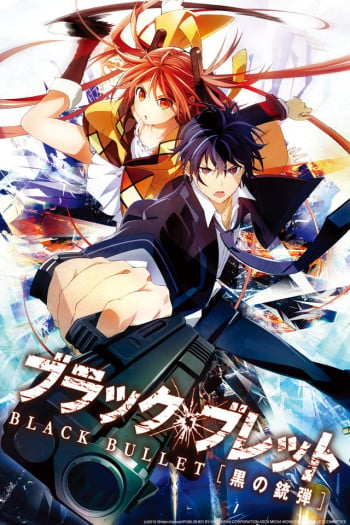 Japan, Year 2X65, Tokyo. As the population continues drop due to a mysterious disease, through a certain incident, the fates of two young men, the orphan Noel, and Rikka, the heir of a distinguished Mafia family, will cross...

Many years after a devastating war, Earth is now being watched by a group of beings known as The Third, named for the third red eye on their forehead that can access various computer systems. Navigating this barren, apocalyptic landscape is Honoka, a jill-of-all-trades who uses her powers to keep her friends from The Third's deadly grasp.

Takes place in the world after the "end" and follows machine soldier Lear, who has been following the "Last Order" and continuing an endless war for over 100 years.

It’s the year 2125, and a strange plague called “Cagaster” appears. One-in-a-thousand people is infected by this disease, which turns humans into monstrous cannibalistic insects. Two-thirds of humanity is decimated... 30 years later, young expert bug exterminator and mercenary adventurer Kidou and newfound friend Ilie struggle to survive in this brutal new world, while delving into the mysteries of the plague and its causes. Kidou is tasked with finding Ilie’s mother, after being entrusted with her by her dying father. Meanwhile, the battle continues to rage against the mutated population of Earth, with the code possibly being cracked to finally end the nightmare.

The third season in this second installment of Hive.

The series is set 150 years after humanity lost half of the planet due to a mysterious "black fog." To contain the "black fog," 3,000-meter-tall (about 10,000-feel-tall) walls were erected to split the world, and the half of the human population that survived now live in cities called "Arks." Shidou Enishi, one of the few Japanese survivors, runs a detective agency on the ninth ark. While pursuing a male suspect in a burglary, he learns of a massive conspiracy, one that may be tied to the Rivigarudo syndrome that is mutating its victims into something inhuman.