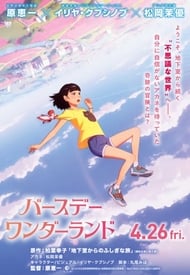 On the day before her birthday, young Akane meets the mysterious alchemist Hippocrates who brings her through a basement and into a fantastical world full of magic and color. He reveals that this world is in danger, and as the "Green Goddess" it is her destiny and responsibility to save this world. The only problem? Akane just wants to go home.

If you want to watch a good adventure anime with an interesting world and an exciting story, I suggest you look elsewhere. Whilst this isn't exactly boring, and it is somewhat entertaining, there isn't anything about the story, world or characters that stands out at all (at least not in a good way). Story The story itself isn't too bad, but since it's basically just dumped on the viewer through dialogue at the beginning and end of the movie, it doesn't have much presence in the movie. The rest of the movie is the characters traveling from point a to point b, during which nothing really happens. Which normally would be fine in an adventure movie, as that is the part of the story where all sorts of fun stuff happens, and we get to see all the weird stuff that exists in this fantasy world. And whilst there is indeed some weird stuff in this world, nothing interesting really happens with it. The story lacks a sense of urgency, which could make for an exiting race to get to their destination, but it also doesn't take the time to explore the scenery and all the interesting seeming things the characters come across. The characters just kind of pass through this world, without the movie ever giving it a chance to be more than a fancy backround to an otherwise okay story. Animation The animation looks great throughout the movie. Especially the backgrounds are beautiful. There are some parts in the beginning of the movie where the characters movements seem oddly exaggerated (which seems to be on purpose, but it bothered me), but otherwise everything looks great. Sound The music is good and fitting, and the sound seems generally great throughout the movie.  Characters All of the characters seem to only have the purpose of moving the story along. They don't really feel like they're meant to be characters at all, but rather set dressing.  The main character, Akane, seems to be more of a side character throughout most of the movie. She doesn't really do much besides occasionally giving a small comment on what is happening, and is basically just tagging along. The other characters that accompany her seem equally as useless, but since there is no real conflict or danger on their journey, that doesn't really matter anyway I guess. The antagonists don't really feel like antagonists, even though they are introduced as and portayed as such throughout the first half of the movie. They keep purposefully destroying random things (basically going out of their way to do so), but that is basically all they really do. Throughout most of the movie, they completely ignore the protagonist, making them pretty useless as antagonists. It almost seems like they just exist for the sake of there being an antagonist (which seems pointless to me). Conclusion If one can look past the story being dumped on the viewer as it is, and the characters not really having any character at all, it is a good way to pass some time, but nothing more than that.

It's not a bad movie but also not the best one. If you search for something to just watch for fun it is worth giving a try. Animation was nice nothing special tho, but characters had really nice eyes (fr i have never seen eyes drawn like that)