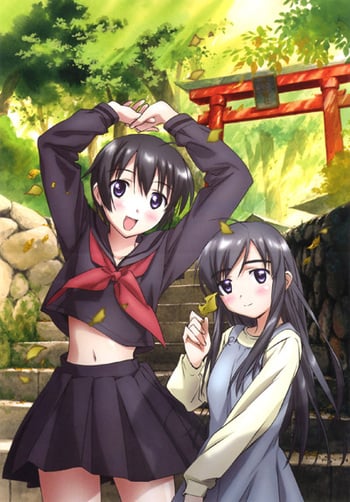 Binbou Shimai Monogatari (Poor Sisters Story) Plot: "Asu and Kyo are two orphaned sisters; their mother passed away some time ago, while their father abandoned them due to gambling issues. Asu and Kyo now live in a rundown apartment complex. Asu, the younger sister, is responsible for all of the housework while Kyo is in charge of living expenses; and together, the two sisters work hard to live a comfortable and enjoyable life. Looking to one another for support, Asu and Kyo experience the hardships of daily living, but are still able to welcome each day with a smile." Story: Ever wondered how life would be if you had no parents, no relatives, living alone with only your own sibling at your side, in an one room appartment without bathroom and finding happiness just by relying on one another or being able to have meals toghether? Someone like me that always had someone at my side to protect, help and support me will probably never understand such a thing. Usually this type of life is specific for adults but its much more heartwrentching when kids face it. Such things do happen in real life as well, and Binbou Shimai Monogatari (Poor Sisters Story) definitely catches and ties up toghether this concept in just 10 episodes. The story is centered on two orphaned sisters Yamada Asu the younger sister, an elementary school student and on Yamada Kyo, the older sister, a middle school student. Their mother passed away at the time she gave birth to Asu and their father had to abandoned them because of a huge debt. Having no one to rely on other than on themselves, they took the weight of life on their backs and with a positive conception about life they always welcomed tomorrow with a smile. I know, this may sound a bit too melodramatic, and to be honest i expected a much more dramatic story in this one, however i received another Minami-ke type, which casted away its heavy comedy aspect and embraced a more realistic view. Asu is in charge with housework, cooking, laundry and shopping while Kyo covers their life expenses. Even though day by day they struggle to put something on the table they always smilled and led a enjoyable life. Of course it may sound a bit ridiculous, finding comfort and joy just by being able to eat something, for some of us who are used to these things we may never understand, however this two sisters show that life does not resume only to materialist stuff and wealth, living a simple life is also a way to pursue and obtain happiness. With funny moments and with dramatic moments, Binbou Shimai Monogatari was a nice experience for someone like me that always looks for life references in anime shows. Screw supernatural shows or other fantasy, unrealistic shows that are only meant to remove us from reality. Facing it is much better and i think much more satisfying, somehow it feels like you can become more experienced in life by learning from other people experiences, it may sound lame but this is how i felt. One thing is for certain, we should learn how to cherish life rather than finding happiness by being materialistic. Nothing much to complain about the story, probably the only thing that dissapointed me is the lenght of it, i wished it had more than 10 episodes, and reveal more experiences of the two sisters. Sufice to say this is one of those shows that really worths re-watching in my opinion. Animation and Sound: Regarding the animation, it was fairly good, the background scenes, the character designs, it was pretty much acceptable for a 2006 production. The sound as well was pretty good, enjoyable soundtracks and cool voice acting done by one of my favorite voice actors, Maaya Sakamoto. Characters: Since this is a short anime show, we don't have a big cast, the main focuse is on the 2 siblings Asu and Kyo and some other secondary characters that appear from time to time and not in each episode. For such a short slice of life show i was surprized that the producers managed to develop the main characters and even the side-characters so well, they must defintely be credited for this. I was glad that the past of the two siblings was revealed a bit as well, to do not leave a huge plot hole. Overall: Slice of life fans, if you guys really want to watch a good show that suits your tastes then don't avoid Binbou Shimai Monogatari. Despite its short lenght its a very entertaining and heart warming experience that will definitely impress you. Those that also want to watch a more realistic show with a "not so common situation" should give this one a shot but those that are entangled in the "action" types should avoid this little slow-paced gem. ~Enjoy and Cya around~

There are few things that can really make me irritated in an anime. One of them is when seiyus lack emotion - like in Whistle. Than there is ugly CG (like in Bantorra ), lack of common sense (like in Sacred Blacksmith ) lack of ending (like in Berserk ) ... the list is long. And finally there is an issue, when anime instead of improving the quality of the manga diminishes it. And that's the case with Binbou Shimai Monogatari.Story - 5.7/10When I've read the show's description it sounded like a tasty meal for a Slice of Life fan. 2 poor sisters, living together and fighting against a cruel, money-driven society. I could almost picture the potential drama - struggling against the prejudice in the class,  some deep arguement, when one of the sisters snaps and shouts some really nasty stuff, and finally reconcilation. There were many possible patterns that I could think of, but all of them had one thing in common - they would lead to a story made of a mix  of laughter and tears. Unfortunately, the tough life in BMS isn't so tough after all.So our poor 2 sisters, are loved by almost everyone in the world, and their pseudo-struggles with the money, are only there to bring more moe scenes of them being over-the-top happy. Amount of sugar that is hidden in this anime could kill a man suffering from diabetes in just 2 episodes. While living their everyday live, sisters find many good people, who can't help but lend them aid. With the happy-go-lucky theme of the world, I'm not even gonna ask about the common sense of 2 girls living alone in a society that have institution of childcare.But that would still be acceptable. I've read the manga and It was nice, heartwarming story. The main problem is that the manga is a title, that consists of only 4 volumes, composed of really short chapters ( 8-20 pages ). The anime is made out of 2 of those volumes, stretched to a point that most of the "heartwarming mood" dissappears in the boredom of waiting for anything to happen. Good slice of life shows manage to use that time to their advantage (Aria for example is master in that art ), but it's thanks to music and animation. And in that parts BMS fails flat.Animation - 7/10The pastel-like background and nice character designs should do the trick, and make this a good slice of life, right? WRONG. Animators made sure that any attempt of nice mood build-up would be shattered due to sudden attack of cheesyness. So when the two sisters are so happy, that the sugar is almost leaking out of screen, the producers had to make it even more obvious and add a falling sakura petals in the background. I don't know what is the basis for that brilliant idea, but I suppose the creators just thought that watchers are so stupid that they won't read the mood unless they are hit with a giant sign "THIS IS WHERE IT IS SUPPOSE TO BE HEARTWARMING,  YOU CAN SMILE NOW" ...As if that wasn't enough there is an issue of main characters cheeks. They are constantly in the state of blushing, for no real reason. Is this some sort of overdose of moe? "They look cute when they're blushing, so let's make them blush 24/7". It's even more annoying when you notice, that this rule doesn't apply to all characters. For example Kinko can live without her cheeks being red all the time.Sound - 5.5/10The story is not as appealing as it should be, the animation is making the good scenes look cheesy... at least they should do well on the sound, right? Unfortunately wrong again. Most of the background music sound as if they were midi tracks from 90s SNES game (and even there I heard some of the better pieces ). When "danger" appears the music changes into what should be suspense, but instead is a big pile of  cheesy. The only tracks that sound normal are the ones based on piano, they aren't really special though - just decent.Both opening and ending are failures. Female singer who sung the OP sounds as if she had a cold during the recording ( if that's her usual voice, than I pity her ). The ending is simply weak.The only part done well was the voice acting. Seiyus yet again didn't disapoint, and managed to express character emotions. There wasn't anything extraordianry here either though.Characters - 5/10 The Yamada sisters were really likeable characters. Even with all the poor execution, I couldn't help but smile at the moe overdose brouhgt by those two. With the way they understood each other and accepted their lifestyle, they seem totally unrealistic, but cute nevertheless.The Echinose sisters are the type of characters you want to smack with a golf club. Their whole existence is nonsense ( rich girls buying stuff from  supermarket, just because the elder girl likes "economising"? Give me a break...) and the poor attempt at tsundere is just making this more annoying.The rest of the cast is made of side-characters and they are really suffering from the lack of the content from other 2 volumes of manga. The landlord manages to say most of the lines he had in the comic book, but the writer from the next room is barely used (hell we don't even learn she is a writer unless we read a manga ). The most annoying fact is that the most interesting characters (Yamadas aunt and her mother) are left out of the story completely (though again - it requires reading the manga, to notice how they butchered this title). Overall - 5/10If you are a big fan of  slow paced slice of life you might like it a bit ( I found some mediocre enjoyment in that moe overdose this show provides ). If you are in a real need for sugar it also might bring you some level of entertainment.  But even then I'd still reccommend reading the manga instead. And if you aren't one of the 2 cases listed above,you should probably stay away from this title. 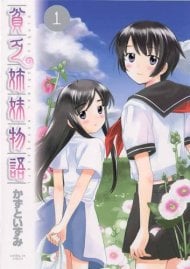