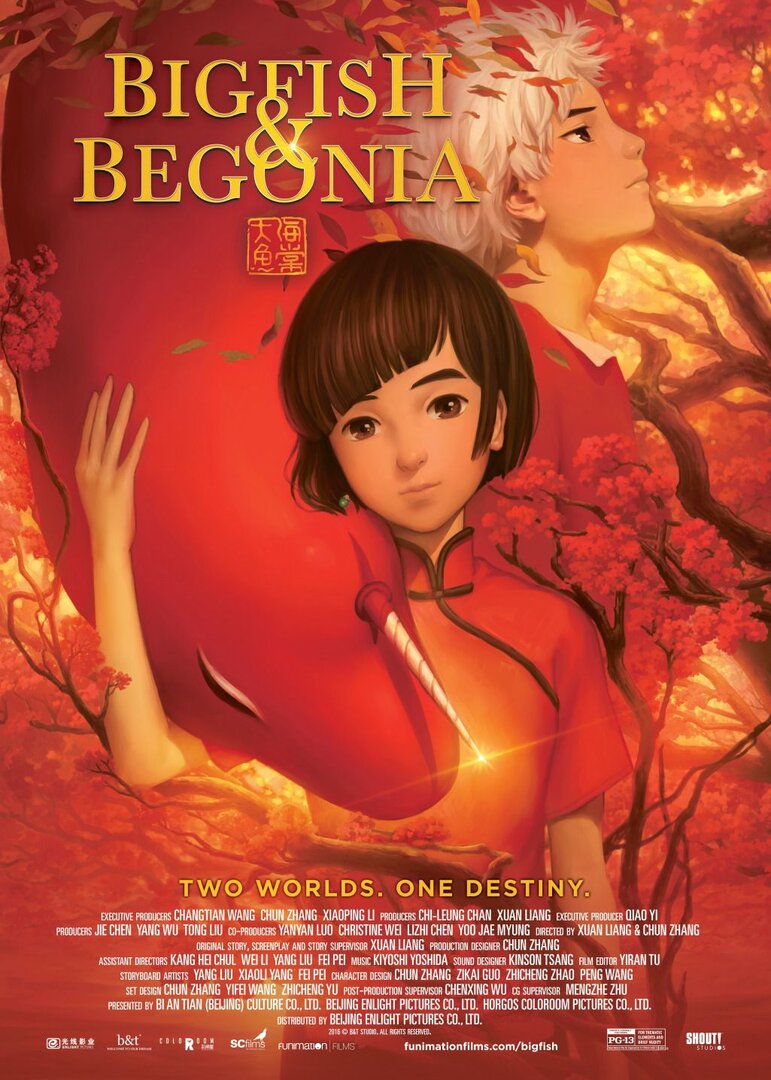 Beyond the human realm, there is a magical race of beings who control the tides and the changing of the seasons. One of these beings, a young girl named Chun, seeks something more—she wants to experience the human world! At sixteen, she finally gets her chance and transforms into a dolphin in order to explore the world that has her fascinated. But she soon discovers that it’s a dangerous place and nearly gets killed in a vortex. Luckily, her life is spared when a young boy sacrifices himself to save her. Moved by his kindness and courage, she uses magic to bring him back to life only to learn that this power comes at a serious price. On a new adventure, she’ll have to make her own sacrifices in order to protect his soul until it is ready to return to the human world.

The first thing I should mention about Big Fish and Begonia is that it is visually stunning. I do not recall seeing many Chinese animated productions (although I wouldn't be surprised if I had inadvertently stumbled upon one without realizing it), but this is one of the most visually impressive I've seen from the country. Like a magnet, it seduces you from the first frame and keeps you entranced for all 100 minutes. In a way, this film reminded me a bit of Laika's recent Kubo and the Two Strings. That film, while not a tightly plotted story, was nonetheless so visually stimulating that one could not help but be glued to their seats throughout. Big Fish and Begonia is the same way. Describing the plot, it's sort of a mixing pot of The Little Mermaid with shades of Spirited Away and Chinese mythology. Basically, this film imagines an "alternate world" way beneath the ocean -- a sort of mythological Chinese flavored kingdom whose inhabitants are some sort of humanoid "spirits" with powers who are responsible for guarding the balance of nature. One of its residents, 16-year-old Chun, participates in a sort of "coming of age" ceremony, in which she is transformed into a crimson colored dolphin and swims to the surface world. Here she comes face to face with a human boy and his little sister. But the visit turns tragic when she is trapped in a fisherman's net. The boy courageously rescues her, only to drown. Feeling responsible, Chun travels beyond the boundaries of her village to some sort of one-eyed demon (Lengpo, the Lady of Souls), where she strikes a Faustian bargain. The boy will be reborn as a dolphin, whom she will have to tame and grow until he is old enough to return to hid world. But the price is two-fold. First, she must give up half of her life force to revive the boy in question (whom she names Kun), and whatever pain he receives, she'll receive too. The second and more dangerous outcome involves unnatural disasters such as rainstorms, maelstroms, and even snow which threaten to destroy her world's existence. Only her closest friend Qiu, who secretly harbors a crush on her, might be able to set things right. As mentioned, Big Fish and Begonia is absolutely breathtaking to look at. The film is also rich with metaphorical imagery, particularly when talking about matters such as life and death. In one scene, for instance, when an old man dies, he is reborn as a tree. His similarly deceased wife, incidentally, is some sort of peacock who comes to rest on the tree in question. In terms of character development, Big Fish and Begonia isn't very heavy on it, but Qiu, oddly enough, emerges as the most interesting of the characters. When we first meet him he appears to be somewhat mischievous and playful. But he also has a very serious dedicated side to him, and ultimately goes to great lengths to help the person dearest to him. The rest of the cast don't stand out as much, but with the possible exception of one fairly negligible potential baddie (who lives in a rat-infested sewer), nobody comes across as truly unsympathetic. Only issue is that there are a plethora of minor characters who only have about five minutes of screentime, to the point where we don't get to know them as well, but that's my only issue. The dub by Studiopolis is well done for the most part, with no noticeably bad performances, although I DID detect some mistimed lines at least in the first half hour -- I do find it jarring to see a character's mouth start flapping only for no sound to come out until the second one, and this unfortunately sometimes happens in the beginning. Thankfully, this problem disappears in the second half, and other than that, as mentioned, everyone plays their roles well. Stephanie Sheh and Johnny Yong Bosch, in particular, do great turns as the lead characters, Chun and Qiu, respectively. Perhaps the best way to describe this film is that it is more visual poetry rather than a cohesive plot, but it also offers a sincere heart that somehow manages to win the viewer over. The ending is also bittersweet and will surely wrench tears. (I know I was crying toward the end!) Directors Lian Xuan and Zhang Chun spent more than 12 years(!) working on this film, most of it being a series of starts and stops. According to the making-of-featurette, this film started off as a wildly successful 7 minute short made in Flash, but acquiring funds for expanding it into a feature proved problematic, and nearly disbanded the animation studio B & J. So what saved the day? Crowdfunding, that's what. The amount of interest from said crowdfunds prompted a Chinese distributor to take a chance and fund the film. Xuan and Chun's lengthy labor of love was greatly rewarded: the film was a smash hit in China, the second most successful animated film over there, in fact. I wouldn't say Big Fish and Begonia reaches the echelons of say, Studio Ghibil, but it doesn't have to. If you're an animation fan and want to see something this breathtaking and emotional, you can't go wrong with this one. Every second of it will have you nailed to your seat.

So I do not know where to start with this one. but i will say anyone who is soft in anyway it may make you cry and to watch after the credits as there is more to help you understand what happens to Qiu now im not going to spoil it any more but all i can say is to watch it as it is very hart toching. i will reccomend to my friends to watch it and for you to wach it it is a marvelous creation of  a story about a youn girl and boy who go through alot togeter and alone. im not going to go into detail as it would ruin the rest of the story line so plaes go and find out for your sefls and do have an open mind when watching as it will help. 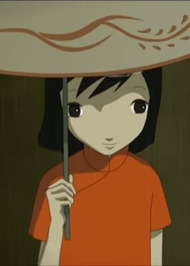