Beyond the Boundary Movie: I'll Be Here - Past - Reviews 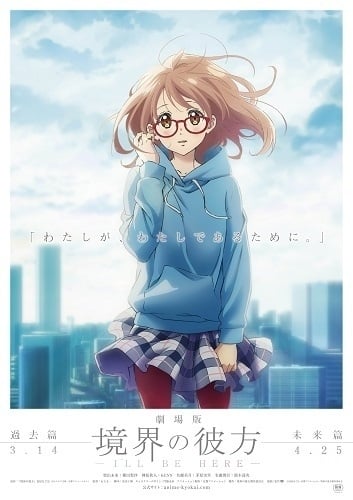 This is a decent movie, but I highly recommend watching it only after first watching the show. The movie is nothing but a recap of the most important scenes in the show, and while it does tell a linear story, it doesn’t make as much sense without having the background the show provides. Scenes are snipped so that you wouldn’t know where the characters are or how they got there if you hadn’t seen the anime. Also, characters pop out of nowhere without any explanation. More than an error, I think these factors indicate that the movie really is meant to be a quick recap for fans of the show. With that said, the very end of the movie is a direct lead into the next movie, so if you are planning to watch that then watching this first might be a good idea.

If you haven’t seen the show and want to know the general plot here you go: Mirai is a Spirit Warrior who has the ability to manipulate her blood. Akihito is a half-youma who is immortal. They meet each other when Mirai is assigned to assassinate him. His immortality makes this a difficult job, and soon the two become friends. But, Akihito’s youma side is not entirely dormant and  can take over his body from time to time. When this happens, Mirai is short on options. Not sure what else I can say without spoiling the plot.

As for characters, as I said they pop out of nowhere. Mirai and Akihito maintain most of their characterization, given that most of the scenes shown focus entirely on them, but the other characters seem expectedly flat.

Granted, the movie does have nice directing and will still hit you in the feels, though the impact will be much less if you have not seen the anime.

So basically, this move is just the summary of the Beyond the Boundary TV series (aired in 2013), probably made for those who didn't watch the TV version so they can get a fast ideea about what the anime is about before watching the Mirai-hen movie.

If you already saw the TV series you can skip it and jump directly into Beyond the Boundary Movie: I'll Be Here - Mirai-hen, which is the continuation of the TV version. If you didn't watch the TV version yet, then I suggest you watch that instead, because you'll get a better ideea about what is going on, since Kako-hen leaves out many things from the story, giving away just the important stuff.

Taking this as a separate entity from the TV series, it does give you an ideea about what is going on, but the amount of information they try to convey in such a short time is just too much so the whole thing seemed rushed, and scenes were skimmed through. Although it's still giving you enough informations to figure most of the things out, it might leave you with unanswered questions at the end of it when you see them putting characters into relationships and situations that are just briefly explained.

Even so, the story is still good with just that, but since I saw already the TV series, I'd rather watch that instead.

For the looks, I think they did a pretty nice job animating and coloring. Even though it's not very detailed, it still has a considerable amount of detail and I think it's good as it is. I can't really complain about anything in particular, but they're missing people in the background. That's basically something that goes on with the TV series and the movie Mirai-hen too, so I guess that's the style they chose when making this. It's not something major, but they're missing this aspect.

Nothing special about the soundtrack selection, but it did it's job and in the end that's all that metters. The voice acting on the other hand was pretty good.

From the short time that they had to put all that information there, they managed to give you an indeea about the characters' relationships and their backround stories, but I find it lacking comparing with the TV series, which is why I recommend watching that instead.

The character developement is still there but while watching this movie you have to accept some things instead of seeing them like you would in the TV series.

Nonetheless they still do a nicely job with the short time that they have, but having watched the TV one I can say you're getting much more from it then from this movie, so go watch that instead.