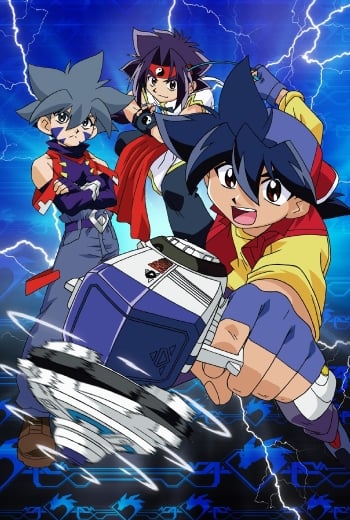 I'm writing this again: This review is based on english dub version.

Story: I don't want to write here anything, because i'm gonna waste my time only. Let's just say, that the story is even not half way good like in the first series.

Animation: Well, now many people will make fun of me, but i think, that this animation is worse, than in Beyblade. The characters look like they are f__king 5 years old. Just WTF happened ? I don't like that.

Sound: Well, it's the same like in Beyblade. The songs are the same, so they even don't prepared new. It's sad.

Characters: The characters are brilliant like always, but with one except. That new girl Hilary something. She's just annoying. It makes look show really stupid xD

Overall: Sequel of Beyblade is disgrace. I didn't knew, that something like this could be done. The animation looks terrible, there are new annoying characters and story is boring. Sound is good through. Don't waste your time on this. It isn't good like Beyblade or Beyblade G-Revolution. It reminds me about that Metal Fight Beyblade: Metal Fusion shit through.

This anime is a sequel to the first Beyblade series. To me this one is a lot better because the story is more exciting, but a little confusing. There is a lot of conflict, not with the just the antagonists, but also a lot of self/inner conflict. This one has a lot more action and more detail. The previous series, the bit-beast were all just one colour. In this show the bit-beasts are represented with a lot more detail and are more coloured so they can be more visualized. I would recommend this to young viewers, but anyone can watch it if they want to.