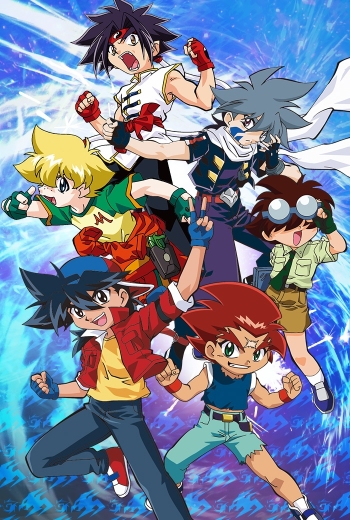 This is the final series of the orignal Beyblade series. To me this was the best one yet. All the characters from the first season are back in this one. The battles fought are more interesting and in more deatil. This anime could have been made better, but it was still pretty good. I would recommend this to many viewers, and I hope that many of you will like it.

This review is based on english dub version (yeah right xD)

Story: It's kinda improved, than in original series and it's better than in V-Force. There will be plenty of interesting things. (No Spoilers hell yeah xD)

Animation: It reminds V-Force, but there are many improvements.

Sound: Well, it's sugoi xD There are new battle songs and like always they kick ass ! The rest is good.

Characters: Like always amazing. There will be many come backs from first series and many new characters as well. It's kinda funny, that Hilary isn't so annoying, like in V-Force. They kinda... shut her mouth xD

Overall: This show is awesome. The story is interesting, animation is good, sound is brilliant and characters are...marvelous. This was awesome ending for the story of Bladebreakers. But it's kinda sad, that there won't be any new series about their adventures. We got stupid MFB instead :(

Someone: Your reviews aren't that accurate. Go learn how to write english first.

Dario: STFU. If you gonna complain, Chuck Norris gonna feast on your soul. And my batalion of spiders will eat you too xD