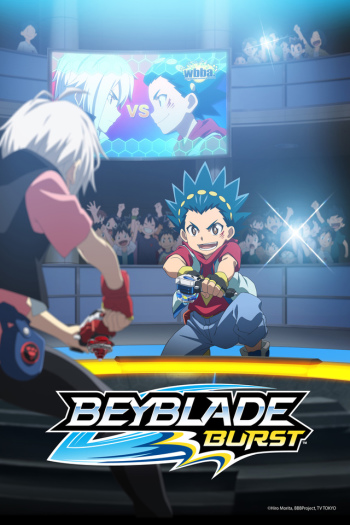 After many years of not caring about the Beyblade franchise, I decided to try the newest one. I watched the original when I was young, and recently rewatched it again; I wanted to see how they shows compared! Turns out what I thought used to be cool characters and intense battles was actually dull stereotypes and  ridiculous spinning tops games. I might refer to the original series as that's what many people can related to.

At the moment, I've only seen the first twenty episodes. So far, the story is a bit more simple than the original plot line (whic involved the mythical monsters trapped in the beyblades and some high stakes games later in the series). The story follows beginner blader Aoi Vault as he learns how to play beyblade and strives to be better by first playing his friends and learning basic tactics. Pretty generic. Early in the series he enters a beyblade competition at the local mall, and qualifies for a larger competition. Of course, he meets new friends along the way and his 'crew' grows. Other than the promise of more tournaments, there doesn't seem to be any overarching story or drama. So far there is no sign of acknowledging the spirits in their beyblades, or any high-stake games. I predict more of the same basic formula. At least the original season tried to make some more situations by introducing a creepy organization who performed a bunch of shady things.

**Note: I can now confirm after finishing the season that the rest of the show was tournaments. 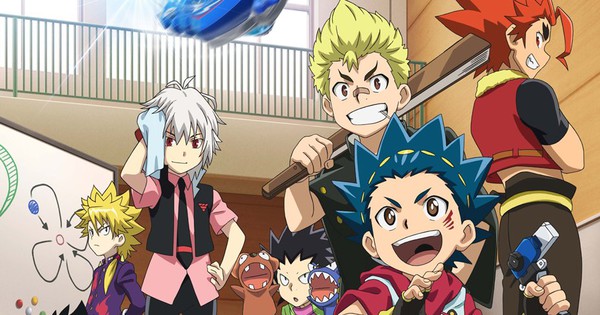 Not much to say here. All the characters are pretty generic kiddy shonen tropes. Their character designs are original and bright to stick out and make up for the bad dialogue. Most of the characters in this show are middle school kids, so they can be pretty annoying to listen to most of the time, not even including the chucks of time they spend yelling at their spinning tops. The main character in particular was too ignorant, not to mention a Mary Sue who learns how to Beyblade and quickly starts to win (or place highly) in all tournaments he enters.

If you've ever watched Beyblade as a kid and enjoyed it, don't rewatch it or any of the new series. They're definitely designed for young boys and are barely tolerable as an adult. I really haven't been enjoying this show. The nostalgia of the original couldn't save it. The formula is simple: train, learn something new, win next match. Repeat, with the occsiaonal turning enemy into new friend. It's of course exactly what you'd expect from a shonen anime directed at 10-year-old boys. Crazy character designs, corny dialogue, and predictable plot lines with the direct intention of making money off the toys. But as an adult woman, pretty much nothing in this series is designed for me. If you're feeling a shonen itch, there are plenty of better options!

I've always enjoyed Beyblade as a series so when I found out about this new one, I was excited to hop on board! I can say that I am enjoying myself. The series itself has always revolved around these spinning top toys that becomes a famed sport in the universe. The concept was to have fun battles to see who could reign the top blader. Simple and fun shonen, tournament based scenario.

What I like about this instalment is the fact that it's very tame and not out of the ordinary like previous titles. While the first series was pretty much on the same level, the concept behind the beasts inside their beys were what drove the series along. When you get to the metal saga, it turns into an all out war zone with classic children's toys being used as weapons of mass destruction! CRAZY STUFF! BUT, still watchable.

Overall I like how more down to earth this title is compared to the super powered ridiculously and down right "why" titles prior to. A little generic but it's to be expected of a series meant for a younger audience. It's another instalment of a classic title and if you like nostalgia then just watch it.

I never really wanted to watch this anime I just found it when scrolling through a watching anime app and I started the series because I watch anything I come across unless it's R rated, anyway I watched I first episode I thought it was cringe but also fun and I'm a sucker for comedy so I continued it and I LOVE IT, I watched the whole thing and repeated it until the 2 seasons came out I like it so much it was one of my first animes I really liked it. People say I didn't like this its weird the idea about a fricken spinning top game stupid right? But I enjoyed and even now after seeing many different animes I still really LOVE IT. The story is kinda cringing and dry at the beginning but it gets after the beginning and season 2 is really fantastic and the storyline comes along. I honestly love all the characters and how they're brought into the story even people say the characters are dry and boring but I think their great a this is my number 1 anime when I watched many and many high-quality animes.