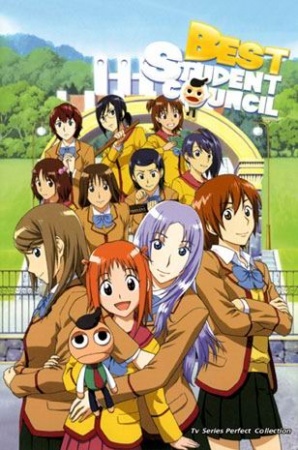 I started watching Best Student Council after a recommendation from a friend who said that it was one of funnier school based animes that he had seen.  Well by the end of the series I wasn't sure if he was trying to trick me into watching something that is only average at best or if he just had rather bad taste in school based comedies.

Story: The plot of the series follows Rino and her talking puppet Puuchan.  As the two of them join the student council and get use to their new lives living in the dorms and attending the academy.  Throw in a cast largely made up of only females all of whom have some kind of tragic past and you get a story that starts off slightly descent, but after couple episodes it becomes fairly boring with overused and repetitive jokes as well as a story that has about depth as a puddle of water.  Truthfully I might have been more interested in the story if they actually explained some of things by the end of the series.  Not that the questions were particularlly interesting, but a bit more knowledge on certain ascepts of the story could have given a the story a small boost.  Also the story got a major hit in terms of balance.  With most of the somewhat funny scenes happening within the about the first half of the series and the second half being of the series revolving around a certain memeber of the student council and something that happened in their past.  While not a bad thing to get some backstory on the characters it became rather tiresome to go from one episode to the next dealing with some rather crappy drama especially for a series that is suppose to be a comedy.

Animation: The animation wasn't anything special.  With rather generic and uninteresting character designs throw in some rather stagnant backgrounds and this series really isn't much to look at.

Sound: The openings and endings aren't even worth listening to after hearing them once.  As for the soundtrack it does its job but that is both a bad thing and a good thing.  Since none of the music is so annoying that everytime it begins playing you just want to mute the entire episode at the same time none of the music really standouts and makes you take notice it.  As for the voice work I thought it was something of a mix there were some that I enjoyed listening to like Yukari Tamura and Chiwa Saito, but the others for the most part really didn't leave that much of a impression on me.

Characters: The characters in Best Student Council were for the most part uninteresting.  Rino was easily one of the most annoying characters of the bunch.  With her rathe upbeat personality that could quickly change to that of a crybaby in an instant.  Then there was her right-hand man Puuchan the only real male of the series who also happened to provide some the best jokes for the series which isn't exactly saying a lot.  The student council president I'm sort of mixed on.  At times she was okay and at other times she seemed to have no real purpose than to fill in space.  Though she did end up providing the ending plot of the the series.  Then there was the rest of the student council who's back stories usually amounted to being no more than filler episodes as the series tried to make it to 26 episodes.  Which in all honesty it would have been somewhat better being only half of that.

In the end Best Student Council is no better than slightly below average series that is to long for its own good.  But it does provide a good source of filler for a couple of days assuming that you don't have anything better to watch.

It's probably because I have a certain taste in animes but this one didn't appeal to me. I rarely drop watching animes so O did watch it fully though and I just believed the story line was weak and nothing held my attention. Watching it was a chore and i was happy when I finished. 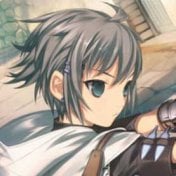 Best Student Council had potential to stick out, but settled midrange in the vast "All Female Cast in a High School Anime" category - although I give it some props for adding a male puppet for the odd factor. All of the 14 main characters have some quirk/archetype that has been done before, but the addition of each past history/secret that unfolded throughout the series kept things interesting enough to continue watching to completion. Unfortunately, most of the action is pretty forgettable and is an un-obtrusive series that you can watch with little thought. The Anime News Network review of each DVD summarizes the specifics if you are curious.

Rino Rando, the unlikely character combination of Osaka with Chiyo's determination and a talking puppet on her hand named Puuchan, created a scenario feeling a bit like Midori Days set in Azumanga Daioh. Kira Vincent-Davis, who was also the the English voice actor for Osaka, felt natural for Rino and was definitely one of the strongest performances of the series. What really threw me for a loop is that the same voice actor of the super-perfect-can-do-everything-11-year-old Maachi Hisakawa is the same as the super-akward-please-don't-talk Cyndi Manabe. Such a contrast! What didn't turn out so well is that some sequences contain nothing but people saying the other's name again and again. With so many characters, it takes forever to get through the "Kanade" Jinguuji chant.

Sparing a complete summary of what happens at the Miyagami Private Academy and any spoilers that can easily be given away, I have a mixed feeling about Puuchan the puppet and the "hidden power" expressed in the series. The pupet is a essentially a jerk the whole time and gets serious when he is required to resolve anything that he can't solve while being a jerk. Because Rino depends on him like a psyche crutch or the Linus blanket from Charlie Brown, it would be nice to have some more redeeming qualities to enjoy. Although... I did feel sorry when he got struck by lightning primarily because Rino was depressed and I forgive the character in the end since he created tension / action in the series.

The hidden power oddity is thrown into the mix like something from Haruhi Suzimiya (which also ended up being somewhat strange) or Full Metal Panic and turns the series into a slice of life / comedy / fantasy hybrid. It's not too drastic of a power, but somehow feels too rushed in explaination and reveal to make it feel like part of the series. Yes, I know there's talking puppets, food magically becoming better tasting with a special blessing, a gigantic cannon inside a mountain,etc., but this didn't give the feeling that it belonged.

One last thing to mention is that I am a sucker for character demeanour changes (Death Note, Haibane Renmei, Kanon 2006 come to mind) and often the light-hearted gags and jokes in BSC lead way to some temporary drama for some emotional limbo. It might have improved the series overall for me, but it also makes it a little unfocused.

A possible Season 2 is expected and I'll check it out if it ever happens.