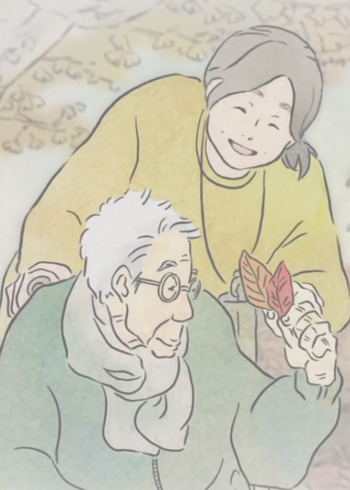 The film is set in China, in the 1960s. An old woman cools herself in the garden. The sunset makes the sky orange. Sunset flower starts to bloom. The flower guides her to daydream. The woman dreams of childhood memories and when she was young and beautiful.

A series of animated videos to promote Shichifuku Towel.

An old couple lives in a Japanese village. They make blooms for living. They have been together for life and work for a long time. Recently the husband noticed the wife has had some symptoms of the disease, which caused some obstacles in their work

It is the day of wake of the Grandpa. Grandma is alone in her room looking at the album full of memories with him. “Are you sad, Grandma?,” asks the boy. She replies her grandson merrily with jokes. In the meanwhile she falls asleep and in her dream she meets a man and makes a promise with him….

An animated commercial for Kao Biore Sarasara Powder Sheets focuses less on a personal hygiene routine, instead opting to tug at viewers' heartstrings. The ad stars three high school friends, one a flutist named Mina and the other a burgeoning photographer named Akane. Mina finds herself getting wistful as the school year is drawing to a close but through the encouragement of her friends (and some well-timed product placement) she's reinvigorated to make the year the best it can be.

Baby I Love You Daze

Japan-based confectionery company Lotte opened a special site to celebrate the 70th anniversary since its founding in 1948. The centerpiece of the commemorative website is a new animated musical short featuring the song "Shinesekai" (New World) by the band Bump of Chicken. The video centers on a middle school boy-meets-high school girl scenario. They are surrounded by a wide range of characters who are all "spirits" of various Lotte snacks, such as a men's singing group representing Ghana chocolate bars and, well, Koalas representing Koala March.