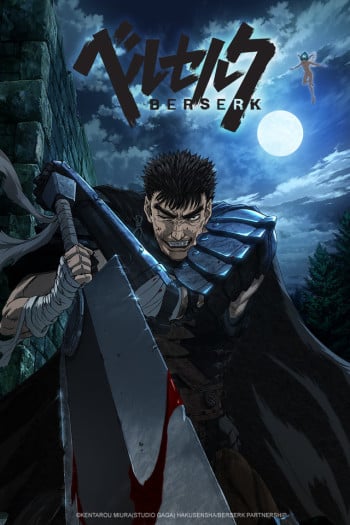 When I called Arkada a nostalgiafag for anticipating the new Berserk, many said I was being a hypocrite since I am also a nostalgiafag. Which I am not, I love the retro aesthetics, but I hardly love most of what I grew up with. I said right away before it’s even out that the new Berserk is going to be shitty CGI that adapts events that are not as good. And that’s exactly what it was.

The 90s Berserk is the best dark fantasy anime of all times. The 2016 version on the other hand is yet another dark and edgy mediocrity with cancer CGI, awful directing, and terrible sound composition. You cannot watch 5 minutes without spotting a lazily made scene with bizarre camera angles and effortless lipsync. When Guts hits something, it makes a ridiculous metallic sound even when what he hits is not made of metal. And when he cuts someone in half, it looks like a plastic toy because the CGI is rendered cheaply.

As if that wasn’t enough, the trailer for the upcoming game promotes it as the most brutal thing ever made. Aside from how it’s obviously not, it also says a lot about how Berserk degraded from a psychological drama to a mindless gorefest. I mean, it always had splatter and violence, but at least the Golden Age arc was very focused on the relationship of the main trio. Each one of them had a completely different mindset which was making the manga, and the 90s anime to be exceptional as a character study. You could say it was edge done right.

The problem is, as soon as the Eclipse was over, the story lost most of its appeal. Not only because the new anime is all in CGI and has terrible directing. It suffers from the exact same problem as the manga, which doesn’t look like shit. The character dynamics are gone, Griffith degrades to a heartless demon, Guts degrades to slaying mostly monsters instead of people which doesn’t have the same impact, and Caska degrades from a strong willed woman to a damsel in distress with the brain of a vegetable.

Also, the newer cast has dynamics which are nowhere near as interesting. They are comic reliefs or background characters who are there just for the heck of it. Guts is the one doing all the work, he is so powerful compared to them that he doesn’t really need them. Yes, later on they help him not to be taken over by evil, it’s still doesn’t take away the issue of them being nothing more than support for the main character instead of having their own strong dynamics.

I also got tired of seeing Guts doing nothing but running after Griffith, as if I’m watching Naruto and Sasuke all over again. I was very patient with it, assuming all the shit that were happening in all these arcs is some sort of a buildup. They are not, the only thing that changes is Guts getting bigger swords and better equipment, stuff that do not count as character development. He just mutated from a man who can’t settle down to a mindless killing machine that wants nothing but revenge. How is that remotely interesting?

And since there is going to be another season coming out next year, I might as well complain from now about the story going nowhere for over a decade, it goes in circles as if I am watching Inuyasha all over again. Many had an issue with how the anime skipped a couple of arcs as if that was damaging somehow, when it wasn’t since nothing of importance happened in them.

I’m also fed up with Miura and his fucking Idolmaster addiction. Instead of finishing the story, he is dragging it indefinitely so he can milk it for all it’s worth and keeps playing that lolishit. He changed Berserk from an amazing dark fantasy with memorable characters into another edgelord throwaway series.

Yeah, ok, he occasionally mentions the importance of religion and how all the suffering in the world is caused by people looking for scapegoats. That was shoehorned after the Goldern Age and although it sounds interesting as a concept, I don’t care about it because it gives a metaphysical aspect to the setting. I wasn’t watching Berserk for demons and hells and holy inquisitions. It was a straightforward tale of ambition and duty, how the gifted go after their dreams and how everybody else is following them since they are mediocrities.

There was no need for the whole demonic invasion bullshit. It made things convoluted and took away the tragedy of death, since now it’s mostly about Guts butchering monsters. You don’t care about monsters, they are 1 dimensional spawns of evil. It’s still a fine spectacle if you love goreporn, but it’s nowhere near as good as it was, and the CGI makes it unable to be immersed. Not recommended.

I never read the manga, but based on the anime (including the Golden Age Arc movies) I would say that the only satisfying way to consume this story is through the manga. The world is too complex to be sufficiently covered by the time/money budgeted for it. There are gaping plot holes, jumps in dialogue and storylines, and if you didn't watch the movies or know the premise then you would be too confused to keep up at all (I had to look up Apostles because that's how crappy the jumps and backstory are).

The only reason I wouldn't rate the animation 1/10 is for the occasional moments of "wow, that was gorgeous fabric animation" other than that it's all odd facial expressions and toxic CGI.

Why does Guts' sword sound like a frying pan slamming against a stove? Why is the speaking so horrifically out of sync with the characters' mouths?

All of Guts' cool mystique is ruined by one liners that sound like they're from an ironic buddy cop movie. There is no logical characterization, just a mishmash of actions led by idiotic assumptions that are not based in any kind of reality.

I'm not a fan of Berserk, although I do respect the art and plot premise for originality and straight up horror appeal. If I was a fan I would be foaming at the mouth, this anime is downright atrocious.

i have never written a review before but i felt i had to for this one, watched all of the origional berserk only to get to the 2016 version and find that the animation was unwatchable for me its shit. cheap cgi like you would find in a diy videogame or youtube animated video, actually i take that back every diy animation ive seen looks better than this nausiating fo-3d garbage

Im am very very skeptical about this work. I have seen previous series from 1997 and then the 3 movies. It was epic, but WTH is this? Story is weird, characters are dull and the animation? No comment, Like it was made 10 years ago. :/

At least the music is quite listenable.

Lets see what comes in next episodes.....

I love the old series very much...this is one of the most awaited anime for me.after watching first episodes animation it start irritating me..the score is given by me mostly bcoz of old anime...