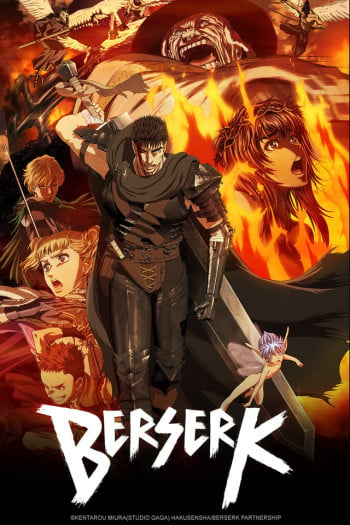 It's been a year since Griffith's imprisonment by the Kingdom of Midland. Once praised as the saviors of Midland, the Band of the Hawk has been on the run and is on the brink of breaking apart. Much to everyone's surprise, Guts returns to the Hawks, and the search for Griffith begins!

For three years, Guts believed his mission was to pursue Griffith's dream together with him. But in order to become Griffith's equal and truly be called his friend, Guts realizes he will have to leave the Band of the Hawk. At the same time, a bloody battle to capture the impenetrable Fortress of Doldrey from the Empire of Chuder is about to begin. The Band of the Hawk will face an army 30,000 strong!

He trusts nothing but his own sword. He has no place to call home. The lone mercenary Guts travels a land ravaged by a hundred-year war. Moving from battlefield to battlefield, his skill and ferocity eventually attract the attention of Griffith, the leader of a group of mercenaries called The Band of the Hawk. Desiring Guts's power to help him achieve his goals, Griffith succeeds in recruiting the distrustful Guts by challenging him to a duel and defeating him. As the Band of the Hawk fight together and their bond as a unit grows stronger, Griffith and Guts's bond deepens as well. With their continued success on the battlefield, Griffith achieves the first step toward his lofty goals: his band of mercenaries becomes recognized as a full-fledged army within the Midland Kingdom. Despite all their success, Guts begins to question his reasons for fighting for Griffith's dream, which, unbeknownst to Guts, is destined to bestow a monstrous fate on them both.

Edo, an era of warriors. There lived an immortal man, the Slayer of Hundreds, 'Manji.' He meets Rin, who has sworn vengeance for her parents. Rin's grudge is against a group of swordmasters – Ittou-ryu. She asks Manji to be her bodyguard on her journey. He refuses, but then sees his late sister in Rin. So began the violent struggle that would bring even the immortal Manji to his knees.