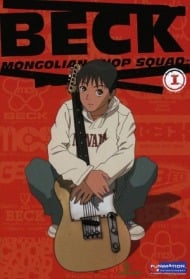 “There are two types of people in the world: those who do what they’re told, and those who are true to themselves” -Saku For those young disenchanted days, Beck: Mongolian Chop Squad plays out like a national anthem. Beck enlivens the notion that realism and idealism go hand-in-hand. Sure, life can be cruel, but dreaming isn’t hopeless. We grow up to accept the harsh reality, but it is our naive aspirations that make life worthwhile. Despite the one-in-a-million odds of becoming a famous musician, artists take risks to follow their passion. Beck takes this bittersweet existence and packs it with the gritty, “live hard, die fast” subculture that is rock n’ roll. From the electric walls of sound to the punk rock hipsters, Beck is a Japanese zeitgeist all on its own. Kids cut class, groupies get high, and all are lured into the musical underground—smells like teen spirit if you ask me. But honestly, there couldn’t be a better background to this coming-of-age story. Beck excels at the “show, don’t tell” game. Characters speak freely, and yet their emotions are implied, making the storytelling more poignant. When Koiyuki is utterly restricted and feels his life’s at a grinding halt, the subway foreman bellows, “STAND BEHIND THE YELLOW LINE”. Or when two lovers feel conflict, there is a heated confrontation between Ryusuke’s dog and a paper wasp. These visual cues convey a range of character emotions that are subtle yet effective. Rather than relying on weak, overbearing narration, the show builds mood through tactful drama. There is an understated joy in watching long still-shots just to listen to Beck’s music in an isolated fashion. Where Beck isn’t so subtle is in its use of cheap antagonism for our protagonist. From geek to guitar god, Koiyuki still manages to let himself get punched around. How many more bruise-faced bullies do we need until Koiyuki gets the balls to stand up for himself (I lost count after three)? Tack on some soulless groupies, a perverted swim coach, one oversexed teacher and you’ve got a lot of extra baggage. Frankly, the show could cut them out, focus more attention on the band members, and still perform well. The dynamics between Beck’s band members hit the perfect balance; they create just enough tension and ample amount of camaraderie to get us rooting for them. From cool-headed guitarist, Ryusuke, to rowdy rapper, Chiba, the band is a gold mine of emotions. Each member carries his own personality and flaws, making for some of the most real characters I’ve seen in anime. Maho, in particular, is a fascinating love interest who strings us along for the ride; her free-spirited individualism is a refreshing change of pace (at least for anime). Wunderkind Koiyuki holds the helm of the show, but his personality pales in comparison to that of his band mates. Although his progression is slow, Koiyuki steadily matures across the show’s 26 episodes. By the climactic end, I felt completely attached to the band’s journey. Ultimately, Beck is all about the music. If classic 80’s/grunge rock is your thing, you’re bound to love Beck; notorious rockers like Lennon, Page, and Cobain are referenced throughout the show. Moreover, Beck gives rare insight into the ruthless, competitive music industry of the now. If you’re a guitarist or a band member, it goes without saying: Watch Beck. There seems to be a love/hate reaction to this show due to its “sluggish” pacing and heavy rock influences, but that simply comes with the musical slice-of-life territory. For everyone else, there’s still a universal message to be gleaned from the roaring madness… Oh, and I watched this dubbed, so no complaints here about the Engrish. 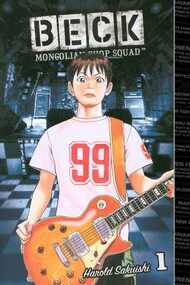