Because I Don't Like My Big Brother at All! - Reviews 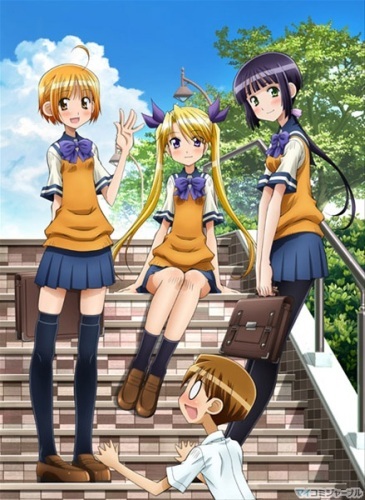 I will try to be as much open-minded as possible over this title and unlike most I will not bash it for its context. It was aiming to be as such and thus all criticism should direct to only how it handled the premise.

As I said, it’s the presentation I will focus on and here is where the fun stops. If the boy is such a horny little guy, why doesn’t he do “it” with his sister? Especially when he knows he is not even blood related to her. That’s right, the show once again somehow tries to water down its immorality with the usual excuse of the girl being adopted. As if that makes incest to be acceptable or something. The girl on the other hand, she doesn’t seem to yearn in having actual sex with him as much as tormenting him with all sorts of foreplay. It feels all too one-sided as she only cares for her own amusement. And then it’s also about their parents who seem to know something is off with their kids and yet they never care to take some measures about it. I mean, you see them advising them occasionally, and the kids seem to agree, and two minutes later they are back in doing the same crap as before. Some parents they are…

That is effectively the thing that ruins this show. It is pretty much the same that ruins all erotic comedies. THERE IS NO PROGRESS. It starts with the characters already in a first and a half base in relationships (third being having actual sex) and yet it never seems to move forward. Not necessarily in sexual deviance but everywhere. An actual romance never seems to form out of all this, the girls never seem to see the boy past being their toy, the boy itself never tries to take the next step, their parents practically don’t care. No mater how good your initial impressions are, the uncaring stiff (in personality; not the other kind) characters eventually tire you and you even end up hating them for that.

At this point I return to the old debate of another show, the all-known “Neon Genesis Evangelion”. I know many people who hate the cast there for a similar reason. They also don’t mature at all and nobody seems to take the next step even if he or she knows the problem. Well the big difference is that you were constantly offered immersion to their psychology, their pasts were gradually revealed, their motives were slowly starting to make sense, and the story in general had lots of things going on at the same time to keep you from being bored. Onii-chan no Koto is not like that at all; there is no depth to the characters, no complicating story to tell, not even progress in a vague objective such as “beat 17 Angels”. It remains as a constant one-track torment.

There is another aspect of the show that feels as bad too. You clearly see how the characters know they are deviant and how they constantly talk about it and occasionally try to change, yet very soon they give up and just fool around as usual. That may feel at first as if the show is aware of its immorality and even self-criticizes its tropes. But that is not true; in reality it is another form of torture, this one directed to the viewers themselves. The lead boy is representing the average spineless dork who is unable to have a steady relationship and thus turns to all sorts of deviant alternatives in order to satisfy his lust. Ok, I see how this can appeal to all of us in some way; very few of us had sexual partners the same week (or even decade) our libido went sky-rocket. We can even see how the show is telling us it is not right and even how it can be fixed. But eventually, it is not really trying to teach us anything. It is just tormenting us, poking fun at how we were or still are wimps who can’t have a steady healthy relationship and just indulge ourselves to playing eroge, peeping at girls’ pants and sniffing unclean underwear. In a way, this is good if you are a masochist who likes being tormented, in the same way the girls torment the boy. Other than that… it is lame. In a bad way.

“NHK ni Youkoso!” for example was also a comedy dealing with people shut to themselves and doing deviant things all day but you could see how the show there was cathartic. They were really trying to get over their problems and become more secure with themselves. It was also a personal drama, a social criticism and partly good dementia. This show is the exact opposite; it’s making fun at you being stuck at your lame shut-in self and wishes you stay like that, so it can torment you indefinitely. Well I am sorry, this is all too cruel to accept if you are not a masochist.

Another issue I left for last is the animation style, which most find horrible. The characters are drawn weird, like deformed cartoons with bad body structure. Well I’m sorry to disappoint you guys but in real life your average anime moe chick would look like this: http://www.japanator.com/elephant/ul/11895-620x-crop.jpg
So stop with the bashing, ok? It’s just an unorthodox style that doesn’t imitate the copied-to-death Haruhi style. In fact, it makes it very memorable to me. I will not forget the characters as easy as I do in so many other shows because they don’t look like one of the same.

But I do agree the production values are otherwise low, with simplistic backgrounds, little actual animation and a forgettable OST. I do agree there is very little value and enjoyment from my part in this show. I do agree it is terrible. Not because it is about incest and sexual deviance but because it doesn’t do anything with those elements other than rubbing them in your face and laughing at your misery. As bad as the story was in “Ore no Imouto”, another show that hinted incest, I still got to enjoy a bit more its otaku culture and good production values. And as decadent as a title like “Aki Sora” was, it still rewards you will lots of actual sex scenes instead of a lame dude running away to fap with porn mags in his room. It’s all in the execution. Really.

Somethings wrong with me for watching everything

Now if you've been in the anime universe for at least 2 seconds you might have come across terms such as "incest" or/and "gag manga/anime"......If not worry not my knight in slimy armor cause your mate Dion is here to give you some guidance through this vast toxic, cancerous wasteland where the only living organisms for MILES are semen and broken dreams.

Now, i enjoy as much as the next person a good laugh followed by booze, drugs and loose girls as long as the next person is Charlie Sheen..But if the story of the previous night is "i married the stripper" and not "i passed out bathing in my own vomit" then i'm sorry it doesn't cut it for me.

To be honest i'm that kind of guy..I laugh my ass off when people die from diseases and rivers of molten lava going through their bedroom or something..But not once did i laugh with this anime. One fucking joke and it's used more than a whore's cunt. From beginning to end one continuous joke....And after a while it stops being a joke and turns into punishment from the heavens.

This also being a gag anime has shit animation..And if i got some gags out of it then i would be fine..But getting fucked in the ass while being also subjected to electrocution....NOT FUCKING FUNNY! It's like someone at some chinese lab thought "oh bugger off with these bio weapons and shit, i want some real action....I want to see people suffer, i want people to stare into the abyss and the abyss rapes them with a machine gun".

As for the characters...You know...The classic line up of fucked in the head brother wanting to stick his sausage to his notrelatedbyblood sister, sister wanting the notrelatedbyblood brother's dick and a whole lot of other hotties wanting in on the action..Again....If you're into watching something to switch off your brain for a while? HELL YEAH but where are the laughs? Where is the extreme factor i'm looking for..You are shit anyways just make it so i have a reason to watch this..Take a look at School Days..An anime for perverts but also seral killers..It had this X factor i'm looking for..Outrageous fun with equal amounts of disgust and self hatred.........THAT'S MY KIND OF ANIME!

This has none of that...It fails miserably even by its' own standards..If you're looking for an excuse to shove in your mouth a gun and blow your brains on the wall? Please be my guest cause the traffic is a bitch these days..But if you're not then don't suggest yourself into this torture.

I am not proud to say that this was the first anime I ever watched compared the others that I have watched it is not that good, I amusually fairy open minded about these things because everyone has their thing so if you like little sisters with brother complexes go right ahead and watch it but honestly its boring.

[This is an edited review]

Note: I have returned to edit some of my old reviews, which simply aren't representative of my current attitude.

This anime in essense is a comedy that runs off of a very limited seletion of jokes namely that the older brother is a pervert (an overused cliche), and that his little sister is in love with him. It can be seen just from the premise that there is nothing truly ground breaking about this work, the only point of interest of this show is the fact that is has an extremely incestuous tone (Truly comedy at its best!). However I decided to give it a shot anyways in the hope that it would exceed my expectations. It did not.

This would've been a somewhat decent watch as a light comedy with a degree of raunchiness, if not for the fact that the jokes are for the most part unfunny and unoriginal. I understand why shows based purely on comedy exist, indeed I indulge in some occasionally, but the crucial piller to shows of this nature is that the comedy of the series must actually be funny. Instead a large portion the 'comedy' in this show is cringeworthy, with another significant portion simply being unfunny trite. Of course, there are occasionally some jokes which bring a smile to my lips or even make me laugh, but for a comedy anime that number is simply lacking. This coupled with the lack of story progression and the lackluster characters that change as much as a cardboard cutout made this quite boring for me to watch.

Praise must be given where praise is due the voice acting for the most part is solid, and the opening theme is quite catchy. Despite this making the anime slightly more enjoyable to watch, it is not exceptional enough to warrent watching the entire show.

I have made quite clear that I dislike the show for being generic and unfunny, however Onii-chan no Koto Nanka Zenzen Suki Janain Dakara ne!! could potentially be enjoyable to some since my sense of humour is not universal. Still all in all I would not recommend people to watch this.