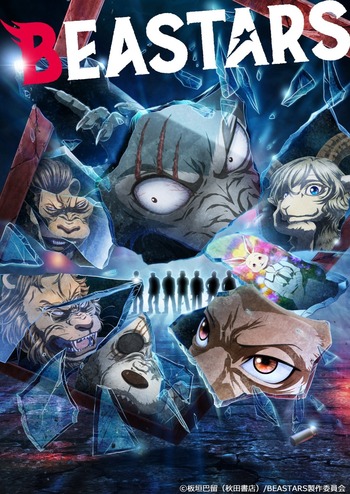 Beastars is one of those shows with a very confusing setup, so its themes can be interpreted however the hell you want to. If you take the show at face value then it’s going to be some kinkier version of Zootopia, about furries wanting to have bestiality. If you see the show as a big metaphor for social issues, then it can be about people expressing their feeling while keeping control of their sexual urges. Or it can be about discrimination because of a cast system (hello India).

Whichever poison you choose, you have to get over the first snag of the show, which is its CGI. No matter how good it seems to be for some, it’s fugly for the casual audience and will only age badly before you know it. But since the subject matter was weird to begin with, it would be a niche series no matter how it looked, so it doesn’t detract anything from the show and is actually adding to its weird atmosphere.

A bigger issue is how there are two plots going on at the same time, with each one having a completely different feel. They don’t mesh very well with each other. This can either alienate the viewer for not getting how they can coexist, or it can add to the weird feeling of the show because the viewer stops trying to reason with the story and just accepts it as its own zany thing. It’s like trying to explain why Bob Squarepants can light a fire on the bottom of the ocean. There is no logical explanation and you just have to accept it as part of the world. Which is why you shouldn’t wonder how can carnivores and herbivores coexist when the former constantly eat the latter. Or why the hell are they having theater plays in a school when students are found dead in the premises and a few city blocks away there is a black market where herbivores are eaten by carnivores, one limb at a time.

There is some mitigation going on, since the grim plot that deals with murders and black markets gets sidelined to the most part. The characters ignore it and the plot we mostly follow is that of a reserved wolf who is trying to have a relationship with a slutty bunny, while a school theater play happens in the background. You get all the usual first world problems people face in schools, like bullying, discrimination, finding the courage to move forward and express your love. On its own this plot is an okay school drama. Simple but makes a point. Once it starts to combine with the other grim plot, well, you HAVE to accept all the crazy stuff that is going on that somehow allows this society to exist. There is no realism compared to our world, so as I said don’t try to explain how it works. For Pete’s sake, the titular title of the show magically changes from becoming a Beastar by having the best performance in a school theater, to becoming a Beastar by finding the brutal killer which everyone was ignoring for 20 episodes. And then there are parts where they train to have sharper teeth and they fight man eating gangs which for some reason are not arrested after the protagonists escape and can just call the cops on them. Don’t try to reason it.

Down to it, Beastars is just weird. It doesn’t have anything to teach you or makes a point, because it takes place in a magical furry land where morality doesn’t apply in the same way in does on our world. The school drama part can be engaging if you can stomach the CGI, but the rest of it is just chaff. It’s not about racism, because the animals belong to different species. It’s not about cast discrimination, because they would have their own separate districts and wouldn’t mingle. It’s not about being honest and brave, because that would mean the carnivores will go amok and eat a lot of animals. Let’s not say anything about what it means to be a furry wolf who likes biting horny furry rabbits. And why is everyone in that world fine with marrying his dinner?

Much like the first season, Beastars 2 sets the bar high for CGI animation and still manages to knock it out of the park. The continuing story of Legosi and his internal struggles is a joy to follow, and leaves me hoping a Season 3 is on the books.

Story: Continuing from where Season 1 left off, Legosi and Louis set out to face the consequences of their attack on the Shishigumi/Lion Group. Their internal conflicts are told in parrallel with a very satisfying conclusion that perfectly contrasts their experiences. There are a number of moments that feel slightly forced, like the author couldn't quite make the next scene happen naturally, but overall the progression felt very convincing. 9/10; certainly not perfect, but immensely satisfying.

Animation: Top notch all the way through. The models, animation rigging, color palletes, and camera angles are all on point. Easily the best Full-CGI animation I've ever seen in an anime, and in many ways even better than some traditional-medium shows.  10/10; I'm excited to see where the studio takes this 3d animation in the future

Sound: Also top notch. Everything lines up perfectly, the voice acting is stellar, and the soundtrack is the sort that you find yourself humming in the shower out of nowhere. 10/10; absolutely amazing

Characters: While the main characters have strong convictions, they're presented as movable and impressionable. They claim ideals and proclaim motivations that they can later go back on after experiencing growth and change. They're dynamic and believable in almost every way. That said, a few of the side characters felt a fair bit less believable - is it because they didn't get enough screen time to fully flesh out their own growth? Perhaps. At any rate, this is a cut above many other anime, even despite my issues with a handful of characters. 8/10; If your only problem is that your side characters needed more of their own story told, I think you're in a good place.

Overall: While it's certainly not the best anime I've ever seen, it's absolutely one of the best anime in recent seasons and well worth a 5-star rating. This is the kind of show that I'll remember and have in the back of my mind for the rest of my life, and find myself comparing other anime and even non-anime shows to. 10/10; Perhaps not life-changing, but certainly life-influencing material.

Season one was good, but the second season was awesome

The character development was amazing, suspense and story great overall great continuation to the first season

Watch it, if you loved season 1 you will have a blast with season 2

Really, despite all expectations, Beasters impressed me a lot and probably developed into an anime that I can speak positively about in the future.

And the result of the second season does little to change that.

I said this, but the second season has dropped massively in quality. While this season stayed true to the characters and continued to present a lot of detail to build up the personalities of Louis and Legoshi. Haru was practically just in the background here, as she has hardly been a Topic this season.

The best part of this season, of course, was the plot around the "killer", his true identity, and the confrontation. Honestly, it gave me a slight How to get away with Murder/Dexter and The Mentalist vibe. The atmosphere was indeed impressive. But this was also only insofar as the murderer was the subject. Otherwise, the tension held flat.

And especially in this season, you could see that the writer thought less and less about how he wanted to implement a scene, but only that it was individual. Yes, the scenes were individual, but there was a lack of explanations in front and behind and there were quite a few logic errors.

The first 2-3 episodes alone were practically inconsequential. The presentation of the snake did not affect the course of the plot and only cost time. I liked these episodes, but only because I thought they were building towards something in the beginning. Unfortunately, I was wrong. And just as many of Legoshi's actions completely intersected with his goal and character. He talks about "protecting" but took such a risk just to play his 1vs1 against the killer. The only reason this season went the way it did was because of a whole boatload of plot armor.
I don't even want to count how many times the characters should have died this season but survived by Divine Providence.

I don't want to complain about the flow at all, I liked both stories, the narrative around Legoshi's duel and Louis' life. But the execution of them was just a slice of cheese with holes in it. Why? The anime had so much potential.

At least I was enormously pleased with one thing in the season. And that was the "killer." God, I adored his personality. The construction of his psyche and how he tried to deal with it. Unfortunately, he possessed less screentime than I had hoped. However, his presence was always massive, you could practically feel it in the atmosphere. His fluctuation between perfectly friendly to the biggest psychopath was fascinating.
I also found the result quite interesting, even if the way to that moment was just a bunch of inexplicably stupid scenes. Especially the scene with Louis at the end... God's sake. What was the author trying to create? Sure, you could see how Legoshi developed and how great his will had been. But the execution of that scene was wrong from so many perspectives.

Alright, I sound like I can kick the anime into the garbage Can for the best. But no, it's not like that. Despite everything, I enjoyed it a lot. I'd even say that the two seasons might well be among my favorites. Especially in this genre.

Unfortunately, I can also understand the frustration and disappointment of many who, like me, could not get the full taste.

(Spoiler free review) I preferred S1, but i still liked wat they did this season. There were some good/wholesome moments, as well as unique/poignant ones. I liked the way characters were explored (their ethics, motivations etc..), & it rly reminded me of aot. At some points tho, i thought the way characters behaved/approached problems were silly, as to me there r more straightforward/easier solutions. Main genres imo: psychological, drama, comedy