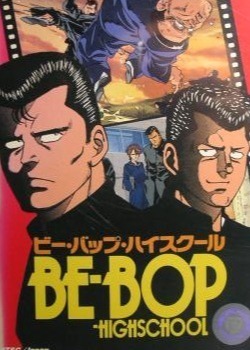 Yuu is a high school kid who doesn't really fit anywhere. To find a place he can belong, be accepted, he will do anything. However one thing leads to another and he is forced to fight to keep his place, his holyland.

Love is the new kid on the block when he runs into the Peach Club, the local gang. Simple and gentle, with an interest in sex toys, Love isn't looking for trouble. Too bad the gang's got plans for him. And so does their leader, Peach.

As a result of an unexpected event, Akira Kogure - an introverted and lonely young man - discovers that the beautiful student council president, Shizuku Takasaki, is secretly the former female head of a gang. She apparently wants to marry a man who's stronger than her, but what she doesn't know is that Akira was a juvenile delinquent whose strength surpassed even hers...

Hyami Daiki who used to be in the legendary group “Two Man Army” is best known as the invincible boxer. His partner, Takayama Jin, is the professional fighter who fights against those who undermine the rules. The fighting is violent yet with sense of justice.

The protagonist Hirota Genki has what others would call a peculiar fetish. Knowing the abnormality of it, he had intended on giving up on love, however, his feelings towards Yachimidori his classmate gets smoldering? He draws out painful scenarios in which a character made in her image always suffers, however, when his comics gets discovered by Sagisawa the class idol, he gets pulled along by her whim.

Toba and Banzawa are a pair of delinquents who are totally out of place at the prestigious alpha-only school they attend. Together they take on delinquents from other schools, and Toba is the only one Banzawa trusts to have his back in a fight. But Toba is keeping a huge secret from his friend: He's actually an omega, and he knows he'll have to leave school once his first heat comes. But he doesn't expect to go into heat right in front of Banzawa, or the unbridled passion that results when Toba's pheromones enflame Banzawa's desire...

Shi-Woon is desperate. He's constantly bullied and getting beat up at school by a gang of thugs, and is on the verge of suicide. Sick of being weak and helpless, the boy turns to the only person he knows who can help: Chun-Woo, a powerful martial artist and also his new teacher.  But Chun-Woo won't take Shi-Woon under his wing so easily, and little does the teenager know about how his would-be mentor acquired his fighting talents...

An unknown planet emerges from inside a wormhole, and its discoverer, Dr. Oguro, christens the celestial body “Remina” after his own daughter. His finding is met with great fanfare, and Remina herself rises to fame. However, the planet picks up speed as it moves along in its curious orbit, eliminating planets and stars one after another until finally Earth itself faces extinction… Is the girl Remina the true cause of the catastrophe? A masterwork of horror from Junji Ito, unfolding on a universal scale.