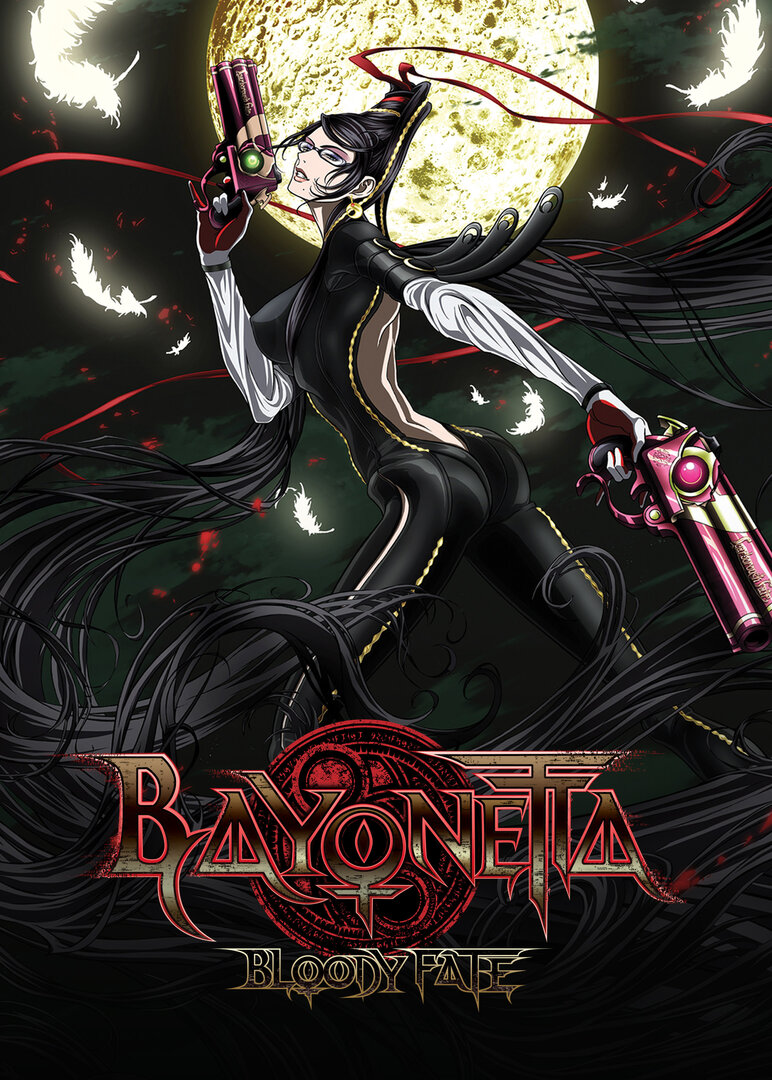 As I watched Bayonetta: Bloody Fate, the new anime film based on PS3 and 360 title Bayonetta, two thoughts kept running through my head: This is the most 90s anime I have seen in a decade,” and “this is even more over-the-top than the game was!

Too often, when making an anime adaption of a game, directors tend to keep too close to the source material—which is often to the anime’s detriment. After all, a story that is designed to be told over the course of 15 to 80 hours often suffers greatly when stuffed into a feature-length (or even series-length) time limit

However, Bayonetta is one of the few anime adaptations I’ve seen in which the story works better as a film than as a game. This is mainly because the creators of this film knew what to cut and what to keep: The overall story and major plot points are kept, while needless details—i.e. specific locations, order of bosses, gameplay-related story developments—are left by the roadside. So while the story of Bayonetta was a bit drawn out and confusing in the game, the movie streamlines it into a tight and rather enjoyable plot

Visually, Bayonetta feels like some of the most beautiful anime feature films from around the turn of the millennium. It shares a dark style and hyper-detailed character designs along the lines of classics like Vampire Hunter D: Bloodlust. The male characters are all walking Adonises—thin frames covered in muscle (regardless of age)—and the females are all Barbies; busty, thin, and with legs that go on for days. There is no sign of the typical moé-invoking art style common in most modern anime—even in the case of Cereza who is legitimately a little girl. Moreover, everything is wonderfully, unbelievably detailed—backgrounds and characters alike.

Once you see the action scenes of Bayonetta, it’s easy to see where the film’s budget went. In nearly every fight, Bayonetta uses a different weapon from the game in all its absurd wonder as she massacres angels en masse. If you have played the game, you know what to expect from the action you’ll see here as Bayonetta shoots, stabs, and spins through the air—always in the most over-sexualized poses possible.

But when it comes to being over-the-top—as you’d expect in a film that shares a director with Afro Samurai—the movie blows past the game by having a new ending that is just this side of Gurren Lagann in how far it’s willing to go. It is truly awesome

As I mentioned above, Bayonetta’s fight scenes are filled with the characters making sexy poses—but that is only the start. There very nearly isn’t a single scene in the movie without some sort of overt fanservice: Bayonetta in a nightgown; Bayonetta in the shower; Bayonetta sucking on a lollipop; Bayonetta rubbing her hands over her body for no reason. It goes so far into pandering that it becomes parody.

But what makes the fanservice truly enjoyable is that Bayonetta herself is clearly in on the joke. She acts this way simply to mess with people—to throw them out of their comfort zone and then see how they react. This includes every member of the viewing audience. It also makes every pose a joke in its own right and it’s pretty darn funny to see just how crazy it gets.

While it’s not exactly the pinnacle of modern anime, I had a blast watching Bayonetta: Bloody Fate. It is a movie that in no way takes itself seriously and is constantly pressing the limit of how far over-the-top it can go while bringing you along for the ride. Moreover, it perfectly streamlines the game’s story and still manages to keep true to its characters. If you are looking for a film that screams 90s anime or you just love campy awesomeness, be sure to give Bayonetta: Bloody Fate a watch.

Bayonetta: Bloody Fate was released in Japanese theaters on November 23, 2013. It will be released in Australia and New Zealand sometime in the future. Currently, no other international releases have been announced.

<small>Kotaku East is your slice of Asian internet culture, bringing you the latest talking points from Japan, Korea, China and beyond. Tune in every morning from 4am to 8am.</small>

I'm admittedly harsh towards movie adaptations that try to condense either an entire anime/game storyline within an hour and half - and Bayonetta: Bloody Fate isn't good enough to be an exception. There wasn't anything rather interesting about it that fans of the games wouldn't have already seen or known. If this was more of an alternative time, or an expansion of parts that we didn't see in the games - then this would've been much better. There were some differences here (Bayo's first set of guns from Rodin breaking, learning Jeanne moonlights as a high school when she's not killing angels, etc) but not enough to matter.

As I typically say about most of these, the source material (being the games) make for a better movie by itself. You could watch the full cutscenes catolog on youtube and be much more up to speed and more likely to get interested in the Bayonetta franchise than you would watching Bloody Fate. I got into Bayonetta from stumbling upon that and it hooked me far more into the franchise than this did.

It wasn't bad, it's got plenty of bloody, ecchi action packed throughout it's 90 minute runtime. If you're a fan of the franchise, you are undoubtedly into that and you'll likely enjoy this for what it is.

Bayonetta: bloody fate is modelled for a female target audience. The action scenes were too lazy, if they ever have a on top of train action scene = lazy.

a anime recommendation for fem gamers

This animated film is a masterpiece! I really do wish there would be a sequal. Maybe after the release of bayonetta 3 they would release a series or another movie. I liked this alot, and if you played the game you'll love this for sure.

Just finished watching (08/02/19) Bayonetta: Bloody Fate. Personally would only recommend this one if you are already a fan of Bayonetta like myself, as it streamlines the story a little too much I feel, and the most it does better than the original in game story is add a couple of extra details at points. However if you are just looking for a fun action anime to watch to kill an hour and a half then I would certainly give this one a try.