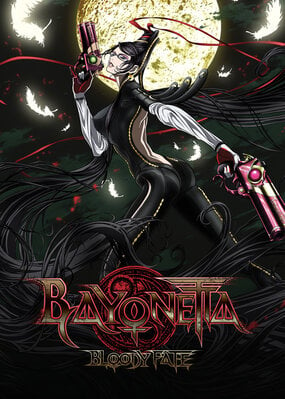 Twenty years after her awakening, the hottest witch in gaming history is still searching for clues that could help unravel the mysteries of her dark past. Aided in her quest by the clandestine weapon smith Rodin – and his deadly creations: Scarborough Fair – Bayonetta continues to leave a trail of angel corpses in her irresistible wake. Her search for answers leads to encounters with a mysterious – and eerily familiar – little girl, a vengeance-obsessed journalist, and a deadly white-haired beauty that seems to know more about Bayonetta than the witch herself.

I'm admittedly harsh towards movie adaptations that try to condense either an entire anime/game storyline within an hour and half - and Bayonetta: Bloody Fate isn't good enough to be an exception. There wasn't anything rather interesting about it that fans of the games wouldn't have already seen or known. If this was more of an alternative time, or an expansion of parts that we didn't see in the games - then this would've been much better. There were some differences here (Bayo's first set of guns from Rodin breaking, learning Jeanne moonlights as a high school when she's not killing angels, etc) but not enough to matter. As I typically say about most of these, the source material (being the games) make for a better movie by itself. You could watch the full cutscenes catolog on youtube and be much more up to speed and more likely to get interested in the Bayonetta franchise than you would watching Bloody Fate. I got into Bayonetta from stumbling upon that and it hooked me far more into the franchise than this did.  It wasn't bad, it's got plenty of bloody, ecchi action packed throughout it's 90 minute runtime. If you're a fan of the franchise, you are undoubtedly into that and you'll likely enjoy this for what it is.

Bayonetta: bloody fate is modelled for a female target audience. The action scenes were too lazy, if they ever have a on top of train action scene = lazy. a anime recommendation for fem gamers