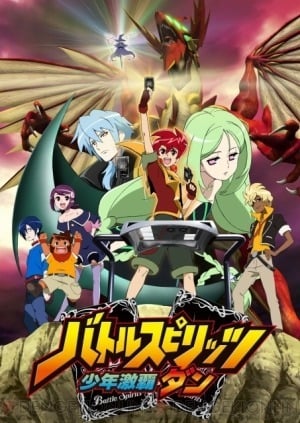 If you're looking for anime similar to Battle Spirits: Shounen Gekiha Dan, you might like these titles.

In a parallel universe called Mon World, there exist magnificent monsters with special abilities. After years of research, Professor Hiiragi has discovered a way to enter this fantastical place and explore it using his special monster detection device. However, he didn't count on the evil Prince Eccentro, who only wants to grab the powers of the Mon World creatures for his selfish purposes! To protect the freedom and happiness of Mon World, Professor Hiiragi employs the help of his courageous daughter Rockna and her boyfriend Mondo, who transform into the Mon Colle Knights whenever danger calls. Working together with the powerful creatures of Mon World, can Rockna and Mondo prevent Prince Eccentro from fulfilling his evil plans?

The new season follows the main protagonist, Aichi Sendou, as his life takes an exciting turn when he is reunited with Toshiki Kai, the person who gave him an important rare card, “Blaster Blade” from the game, “Vanguard”.

Popo, and his family were harmoniously living with the insects in the forest until one day when his father left him and gave him a mysterious pendant with magical powers. Now, with mysterious events happened to his mother, he must travel with his newly found companions to the forest to solve the mysteries bound in the east.

Through an unexpected turn of events, an ordinary elementary school student, Hiro Enryu, finds himself in the world of the "Dragon Collection" game. This is a world called Dragon Earth, where gods, humans, and monsters exist side by side. Those who roam this world using a magic book, called a Grimoire, and cards to summon monsters and search for treasures that bear the powers of dragons are called Dracolle Battlers. Despite his bewilderment, Hiro becomes a Dracolle Battler and, together with the friends he meets there, begins his adventure to become a legendary "Dragon Master!”