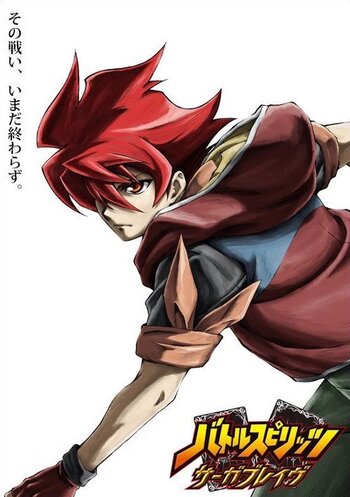 You don't know how happy I was for this web series!! It takes place after the end of Battle Spirits Brave so it was very exciting knowing there actually was a sequel. I think I liked this sequel as much as I did because I was so attached to the series when it first came out and to watch 100 episodes (Battle Spirits: Shounen Gekiha Dan & Brave) to end the way that it did was just cruel... but the end gave so much impact to me that I never could get over it and is still one of my favorite sad endings I've seen. Well let's begin with the actual review!

The web series is 3 episodes long at focuses on what happens in the world about 10 years after Dan saves the world and how the world still has a long way to go... each episode mainly focuses on a different timeline the first being the future, the past and the present and how all the main characters are doing. In those episodes when they're in need Dan suddenly appears in front of everyone, while they're about 10 years older, Dan hasn't changed ever since he became the trigger... Dan helps them out and helps them out and clear their minds of their problems they had and then disappears in the thin air again when finishing his job.

My favorite 2 moments were episode 2 and his scene with Mai in episode 3:

Episode 2 was mainly about the past which focuses on Zungurii (Although he wasn't one of my favorite characters I really missed him after he didn't appear in Brave and I wanted them to meet again ever since Dan´s personality drastically changed in the 2 year timeskip there was between the 1st and 2nd season of this franchise) it shows that Zungurii got stronger but tries to do everything himself then Dan shows up to help him but Zungurii doesn't want his help and runs off, he ends up being captured but the villains and Dan challenges him while making a bet but Dan doesn't care about it since he is confident about winning against the villain. Although Dan doesn't smile very often and especially not in a serious battle he was happy to see the nostalgic battle stage again. Dan battles the villain but he easily beats him while Zungurii is watching him from the sidelines, then Dan talks with Zungurii in a world only those 2 can see in the mid battle (guess is since Dan technically isn't alive/human anymore he is able to speak with him with his mind) they talk about why Zungurii tried to save everyone alone, and he tells Dan that he was upset and he ran away from him because had heard the news about him becoming The Trigger from Magisa so Zungurii tried to do everything by himself too. Dan explains that he didn't become The Trigger because he wanted to but he was prepared it could happen to him :( He didn't do it for everyone's sake and that he isn't as cool as everyone think he is Zungurii is shocked about hearing his story but Dan says he is fine the way he is and beats the villain... after the battle Zungurii says it's unfair how cool he is but Dan tells him that here on out it's his turn, the Zungurii quietly asks him if he remembers their promise. Dan kept his promise and plays against him, Magisa shows up and it cuts back to when they were playing against each other when they were younger ;;; the beginning of the next episode shows that he left the world before he could eat the curry (which probably also meant he disappeared in mid battle...) :(

Episode 3 is in the present and while they all can feel Dan is returning they don't want to worry him and let him "rest in piece" Dan battles against the main villain of this web series while his partner kidnapped Mai. Kenzo and Suzuri tries to save Mai while Dan is still battling (they do not actually know that Dan is back) in the middle of the battle Mai and Dan´s minds are connected and they finally get to talk with each other after she waited 10 years for him to return after he became The Trigger... Mai tells Dan that he is too late and there's no more curry left ;;;; (MY HEART ALL ALL THOSE PROMISES!!!) and he answers that he knows and it was a path that he chose himself... he calls out Mai´s name he tells her that he doesn't fight alone because he has Mai by his side (THESE ONIONS!!!) They both thank each other and while Mai is crying their hearts connect while they're moving further away from each other which is when Mai wakes up... so Dan doesn't physically meet up with Mai but they had their emotional talk... While Kenzo and Suzuri are visiting Kajitsu and Yuki´s grave they say Dan is here too and smile, then he actually appears behind them and they're shocked to see him again but he doesn't say a word instead walks closer to their grave where 2 butterflies in the colors of Kajitsu and Yuki flies to his hands.

Although he is no longer actually with them they can still feel his presence and they all know that it wasn't the last time they meet him (I mean they've already waited 10 years so he will surely return again even if the others don't want Dan to worry about them) he will always be there for his friends when they need him.

I waited almost 10 years but I'm satisfied to get answers so I'm thankful!!